What caused the comet ISON to disintegrate?

So curious to know why comet ISON disintegrated? Well, it went near the Sun but was the Sun the only reason it died? Or is there any other reason for it's fading away?

ISON slingshot past the Sun close enough (around one Solar diameter) for its surface temperature pointed towards it to reach 6,000 °C and it wasn't a fast spinner either to help this temperature average out along its total surface. In a nutshell, it melted to its nucleus into a hot gaseous plasma of materials it was composed of long before it reached perihelion. These materials still followed more or less same ballistic trajectory prior to perihelion, it merely elongated substantially due to strong gravitational influence of the Sun.

As it was approaching perihelion, the Sun's tidal forces broke this plasma into a wave-like pattern, increasing its surface area and exposing its materials to solar winds (and possibly hit by one CME, Coronal Mass Ejection that was detected near comet ISON on the perihelion day), changing orbit of different mass and size particles differently.

This was apparent past perihelion when the comet failed to create tails pointing away from the direction of solar winds like comets with a nucleus do, but instead started splitting into two masses inclined roughly 90° to each other, suggesting different mass particles separated and the comet was indeed torn apart by Sun's gravity.

Since most of its materials thus gained angular momentum different enough to negate its own gravity, and they weren't bound to each other as they would if it remained solid, it entered a spin of death, slowly evaporated and dissipated entirely. No nucleus was observed to survive the perihelion, end even Hubble wasn't successful in finding any of its remains, further proving this fate of the comet ISON.

This is also additionally described with the help of ISON perihelion videos from various spacecraft in this Emily Lakdawalla's blog post, and since a picture tells a thousand words, here's my capture of a frame from SDO (Solar Dynamics Observatory) that matches the time, estimated size and distance, suggesting it could indeed be comet ISON being torn apart by tidal forces on its perihelion: 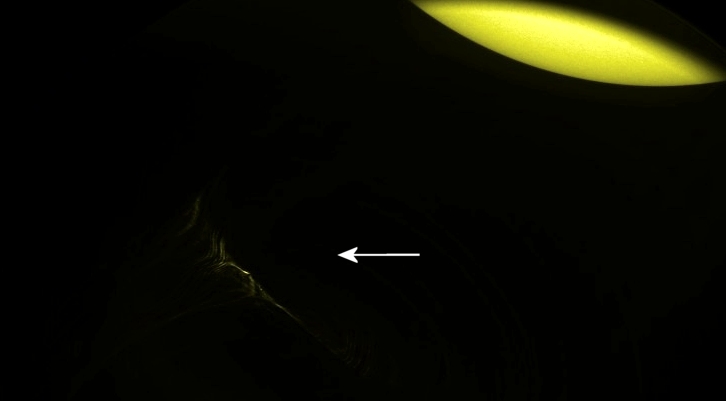 This SDO frame (SDO/AIA - 4500 203/11/28 18:00:07) seems to have been missed by all other astronomers that were following the demise of ISON, likely because SDO was just positioning itself for ISON's perihelion at the time and this isn't a complete frame. So, in a sense, this is Astronomy Stack Exchange exclusive. :)

Update: Turns out it was a reflection / filter defect after all. I would like to point out that I never claimed this SDO/AIA frame shows comet ISON, merely that it seemed to me that it might. Position did seem odd, but not being equipped with all required SDO data, I had no way of confirming that. Clearly, I'm not experienced in interpreting SDO data, let alone a qualified expert, but my perseverance did pay off regardless and Dean Pesnell of the SDO team kindly looked into this and wrote an eye-opening explanation for this SDO/AIA frame in his SDO blog post Was Comet ISON Seen in AIA 4500? A polite debunking of my suspicions, an interesting read, and another win for science over one layman's speculation. Kudos to Dean Pesnell and the NASA SDO on Twitter!

Not the answer you're looking for? Browse other questions tagged the-sun comets or ask your own question.

21
How often do comets survive passage by the Sun?
8
What is the direction of a comet's dust tail before and after perihelion?
3
Is C/2012 S1 (aka ISON) the fastest comet on record to-date?
6
What's the estimated remaining life of Halley's Comet?
3
Classification of a Comet
4
Is a comet necessarily confined to the solar system?
5
What is the closest an asteroid or comet has passed the Sun and survived?
1
Comet 289P/Blanpain sudden outburst?
5
Why do we only have one major meteor shower from 3200 Phaethon?