Do sungrazing comets leave a field of meteoroids near the Sun?

A large fraction (a third?) of all comets found (with observational bias thanks to SOHO) have been sungrazers, breaking up with perihelion of a few of Sun's radius. Is there reason to believe that this replenishes some kind of vulcanoid population of small objects? Or would they evaporate and be blown away by the Solar wind, or continue in their comet's orbit, or be ejected by Mercury's eccentricity? Would the constant replenishment, even now, not billions of years ago, help keep a population there in spite of all above? 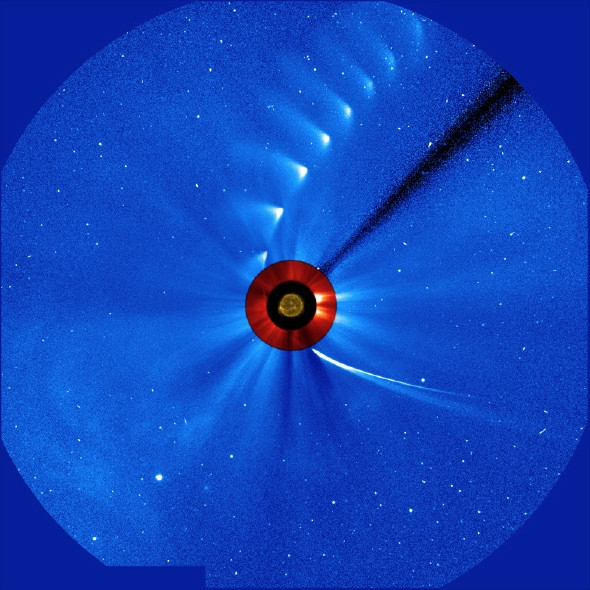 The SOHO image you attached, provides some evidence, that most of the debris continues the trajectory of the original body. Most of the debris hence won't replenish the Vulcanoid population. But due to the disruptive event you get an additional delta-v, which may change the orbit a bit, however insufficient to slow down to a Vulcanoid orbit; compare the velocity of the comet near perihelion with the speed of sound as an order of magnitude estimate of the upper limit of the delta-v for debris. Dust may either be slowed down in this or in future orbits in the solar corona to end up in the Sun, or blown away by solar radiation pressure, again no Vulcanoids.

Not the answer you're looking for? Browse other questions tagged the-sun asteroids comets mercury or ask your own question.

18
What is the difference between asteroids, comets and meteors?
21
How often do comets survive passage by the Sun?
11
Motion of the sun as observed from mercury
1
How near to Earth do comets pass?
1
If sun steals comets from other stars, then what is the primary source of comets?
8
Does Jupiter help to protect the Earth against comets/asteroids impacts?
6
Why do sun spots appear near the equator of the Sun?
0
Do comet tails increase as comets move away from the Sun?
32
Why doesn’t the Sun fill the sky on Mercury?
6
The creation of comets