What are the Earth-like features of Titan?

This NASA site says that hidden beneath the smog of Titan are Cirrus like clouds and This space article describes how Titan's atmosphere is similar to Earth's too.

What other features does Titan boast that make scientists so ready to boast that "Titan may well be the most Earth like planet we know of besides Earth itself"? (paraphrased)

Answers should focus on the features of Titan itself, obviously a similarity is that it orbits the same Sun, but this type of thing is not what I'm after. I am mainly searching for geological or atmospheric similarities that Titan shares all the way down to potential similarities in the composition and flow of the planetary core.

To expand a bit on Undo's answer, there are some geomorphological features on the surface of Titan that resemble similar features on Earth, suggesting similar processes.

For example, according to this NASA image comparison, some lake features have features that are similar to groundwater based salt pans on Earth. Image below: 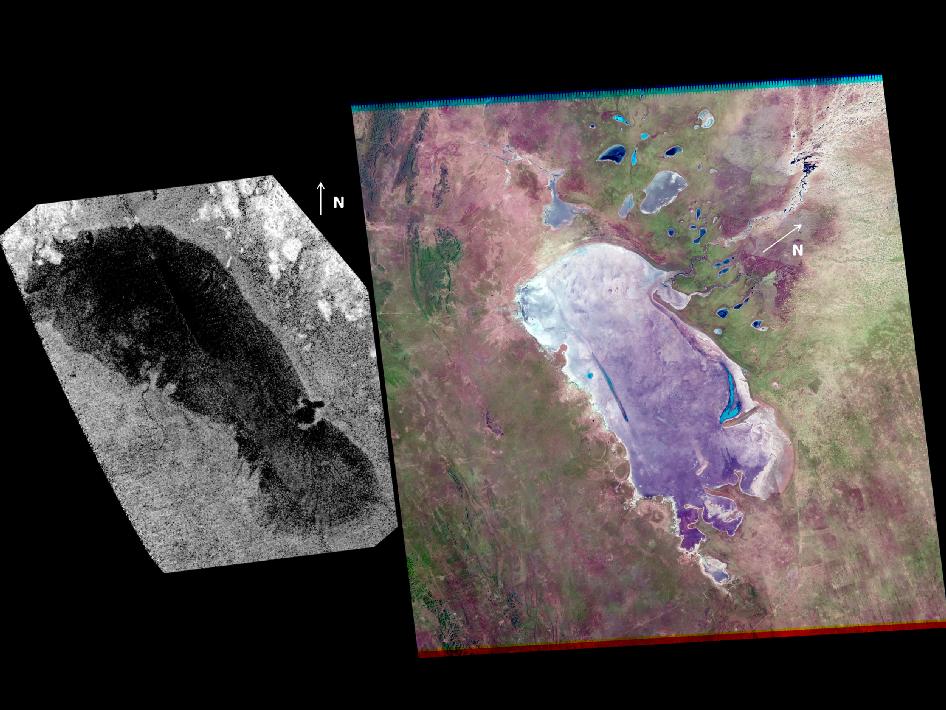 The feature on the left is Ontario Lacus on Titan compared to the Etosha Pan of Earth on the right. It should be noted, that the Titan feature is considerably larger than the Earth analogue.

A lot - from this space.com article:

Saturn's moon Titan may be worlds away from Earth, but the two bodies have some characteristics in common: Wind, rain, volcanoes, tectonics and other Earth-like processes all sculpt features on Titan, but act in an environment more frigid than Antarctica.

The article goes on to say that while Titan has these earth like features, it only receives about 1% of the sunlight that Earth receives. Because of this, the average temperature on the moon has an average surface temperature of -180 C (-292 degrees F), and water can only exist there in a super-frozen form as hard as rock.

On Titan, methane takes water's place in the hydrological cycle of evaporation and precipitation (rain or snow) and can appear as a gas, a liquid and a solid. Methane rain cuts channels and forms lakes on the surface and causes erosion, helping to erase the meteorite impact craters that pockmark most other rocky worlds, such as our own moon and the planet Mercury.

As for the planet's core, this Stanford paper has some info:

I'm not going to quote the whole paper here, but it's a good read on the subject of Titan's core.

This Wikipedia article has some information about Titan's atmosphere:

Observations from the Voyager space probes have shown that the Titanian atmosphere is denser than Earth's, with a surface pressure about 1.45 times that of Earth's. Titan's atmosphere is about 1.19 times as massive as Earth's overall, or about 7.3 times more massive on a per surface area basis. It supports opaque haze layers that block most visible light from the Sun and other sources and renders Titan's surface features obscure. The atmosphere is so thick and the gravity so low that humans could fly through it by flapping "wings" attached to their arms. Titan's lower gravity means that its atmosphere is far more extended than Earth's; even at a distance of 975 km, the Cassini spacecraft had to make adjustments to maintain a stable orbit against atmospheric drag. The atmosphere of Titan is opaque at many wavelengths and a complete reflectance spectrum of the surface is impossible to acquire from the outside. It was not until the arrival of the Cassini–Huygens mission in 2004 that the first direct images of Titan's surface were obtained. The Huygens probe was unable to detect the direction of the Sun during its descent, and although it was able to take images from the surface, the Huygens team likened the process to "taking pictures of an asphalt parking lot at dusk".

13
What is the current accepted theory as to why Titan has retained its atmosphere?
2
How do scientists know if an Earth-like planet is really Earth-like?
4
Could we detect an earth-like planet around another star?
3
Why does Titan have lower surface gravity than the Moon when Titan is more massive?
8
Are there other pictures of Titan surface from Huygens?
1
What apparent sizes of the sun an Earth like planet can have?
2
What if the atmosphere of Titan were like the one on Venus?
0
What would happen to the Galilean moons and Titan if Jupiter and Saturn disappeared?