I am so sorry for being ambiguous. I'm not an astronomer and have have never actually even bothered to look at the sky before. I don't have a telescope nor camera.

Yet, I'm really really curious about what it is I saw in the sky tonight.

Towards, the east I first noticed a "constellation" the looked much like what is described to be the big dipper (It is possible that it could have been Andromeda and Pegasus). It was squarish and had somewhat of a ladle towards it's north eastern corner. The most distinguishable feature of the structure was that it had 3 stars in a straight line. It was the straightest line in the entire night sky.

About a hand's length to the west was another "constellation", my guts said it's name was Orion. Again, I have never seen, let alone distinguished, a constellation properly in my life. It was like a triangle with it's nose pointing towards the east. The sides that converged to the nose seemed to extend a bit backwards like antennas.

And to the west (a few inches north to the Orion was this strange glow. At first I thought it was my eyes playing tricks on me as sometimes whenever you stare into light bulb or some other light source, a faint glow in that area of your vision often persists. And as I looked directly at it, it slowly faded away into darkness and all that was distinguishable was an extremely tiny star or two. But whenever I looked to something near it (like a tree or constellation) , the patch reappeared. Then, I noticed that there was cluster of tiny little stars. I couldn't make out much. What caused that light patch? It seemed to glow in and out like it was breathing. I am sure that my eyes weren't playing tricks on me because even as I turned around and tilted my head and jumped up and down in the process, the patch remained in the same spot in the sky.

The location which I observed this is from Ernakulam, Kerala, India. The nearest current sky map I could find is the following from Chennai (which is really far away): 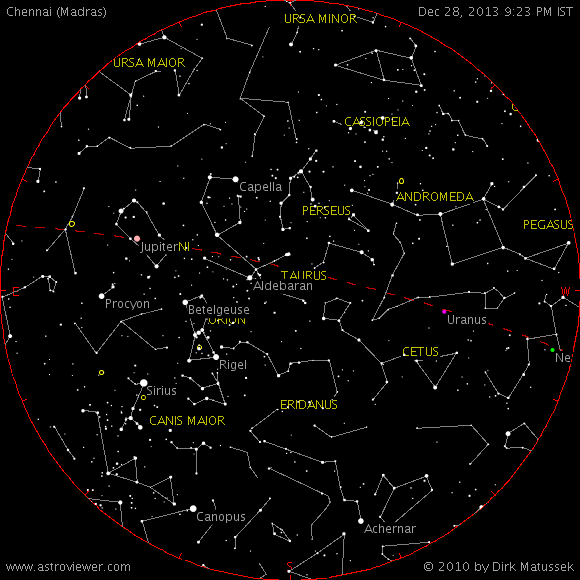 I can't make head or tail of it. Please help and no I'm not crazy. I know it sounds like one of those crazy UFO stories but I assure you it's not.

Is there anything like what I've said observed in the night sky before?

Given the description, that light patch was probably Pleiades. 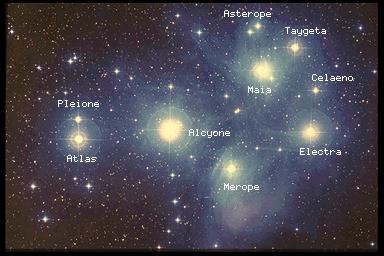 It is a star cluster in the constellation of Taurus which is inspired from a popular Greek mythology of Seven Sisters. You can read more about it here.

EDIT: One of the great softwares, free and open source, for amateur level observational astronomy, though professionals use it as frequently is Stellarium. It's easy to use and should clear all your doubts.

Not the answer you're looking for? Browse other questions tagged amateur-observing supernova or ask your own question.

18
Why do the Pleiades look clearer when viewed indirectly?

2
Brightest star of the night sky
10
Did I see a supernova explosion?