Why do certain massive stars leave no remnants?

Mass and metallicity are the two main determinants for a star's fate. This is simple enough. What's more complicated is how exactly these determine the star's fate. For example, you can see in this image I got from Wikipedia's supernova article: 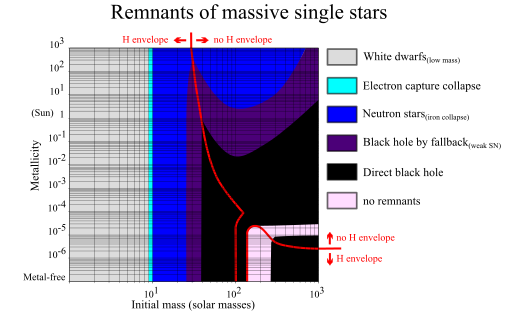 Generally, as metallicity decreases and mass increases, black holes become more likely to form. At a specific mass and metallicity range, however, there are no remnants left behind. From that point, increasing mass and decreasing metallicity allows for black holes again.

How does this work? Why would there ever be an area in which no remnants are left behind? In fact, it seems almost random, since the range lies right between direct black hole ranges.

The gap appears because of pair instability supernovae. In short, as one looks at such massive stellar cores at increasing temperatures, an ever-larger fraction of the photons are sufficiently energetic to spontaneously form electron-positron pairs. True, they soon recombine, but there is nevertheless a loss in (radiation) pressure, which causes contraction, and thus a further increase of temperature. If unstable, as appears to be the case in such massive stars, this leads to more high-energy photons, more pairs, and a further loss of pressure.

Models of such objects suggest that the collapse leads to a sudden, rapid ignition of oxygen- and silicon-burning reactions. In a mass range between about 150 and 250 solar masses (corresponding to core masses of very roughly half of that), the thermonuclear explosion is enough to rip the core apart, and there's nothing left to collapse. This is a bit like how the sudden onset of carbon burning destroys white dwarfs in type Ia supernovae. More massive cores are more strongly bound by gravity, and models suggest that the nuclear explosion isn't enough to unbind the core.

So below about 150 solar masses (and at higher metallicities, I think), the core doesn't reach pair-unstable conditions. Above about 250 solar masses, the induced nuclear explosion isn't powerful enough to destroy the core.

Electron capture supernovae occur in a narrow regime where electron captures on to products such as Mg and Ne are happening at a rate that removes support of the core against collapse "faster" (or more efficiently than) the white dwarf will be able to explode via thermonuclear runaway as the white dwarf approaches the Chandrasekhar mass limit. Several factors are at play, but these electron capture collapses are thought to happen in white dwarfs that are rich in oxygen and neon, rather than carbon and oxygen (which have different critical densities for burning). These stars were still not massive enough to form "regular" neutron stars via the iron core collapse channel.

Not the answer you're looking for? Browse other questions tagged star black-hole stellar-evolution mass metallicity or ask your own question.

5
What type of star does theory predict should be the most massive?
4
Why is metallicity important in the death of stars?
2
Why are black holes that massive?
2
Relationship between metallicity and color? Should Pop. I stars be blue?
8
Do all massive stars explode?
0
What is the “hypothesized lower mass gap” between 2.5 and 5 solar masses?
3
Do more massive stars become larger or smaller white dwarfs?
16
Why do massive stars not undergo a helium flash