Can the centripetal force be inverted? [closed]

Using the centripetal force to create artificial gravity has been proposed for space exploration. From our perspective, the force is an outward force, pushing objects away. Could it be inverted to attract them instead?

Could we, instead of having a spacecraft, or a "dish," rotate to create the force that would push the travelers to the inside of the hull - could we instead have a cluster of dishes rotating in such a manner that the travelers are pressed to the outside of a sphere?

Or, could we construct an artificial mini-planet with a gravity exceeding by far the gravity of a natural celestial body with the same mass?

Close to a black hole, but still outside the event horizon, orbiting arbitrarily fast, wouldn't result in a circular orbit, but in a trajectory towards the black hole. In this extreme scenario, centrifugal force could be interpreted as attractive.

I'm not aware of a physical realization of imaginary angular velocities, at least not for circular orbits, although this paper introduces imaginary velocities for hyperbolic orbits. This may be derived from imaginary circular angles. Negative masses aren't entirely impossible, but those potentially feasible are too tiny to be of any practical value in your sense.

The simple answer is no.
The centripetal force is what we call an 'inertial force', as contrary to 'fundamental force'. This means there are no charges attached to it, and no field (-analogue) that propagates this force - unlike e.e. for electromagnetism and gravity.

A inertial forces originate purely in changes of your frame of reference (or 'viewpoint') and how this frame moves relative to your originating frame.
The name fictious force for this concept is also very common. To this the corresponding wikipedia-page discusses an example with a deccelerated bus, which I can only very strongly recommend to study in order to understand the concept of inertial forces.

The direction of the centripetal force is tied to the acceleration at any given moment. Any path that a massive object has through space has a curvature at every point of this path. This local curvature defines a so-called osculating circle (see below) towards which the centripetal force points. Thus, there is no way to reverse this. 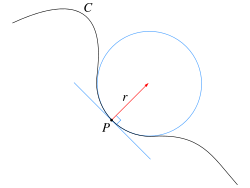 Sorry, if this answer seems a bit vague, but I think this is the best I can do without going deeper into the math of classical mechanics that covers those topics.

Not the answer you're looking for? Browse other questions tagged newtonian-gravity or ask your own question.

2
Why does a particle feel no force at radii greater than itself?
0
How can I predict space directions?
8
Can I measure the moon's gravity?
1
Gravitation - Pulling or Pushing force?
3
Can gravity be amplified by other celestial bodies in its vicinity?
4
Does the gravitational attraction near the surface of dense celestial objects diverge from inverse square?
8
How strong are the tides raised by Io on Jupiter relative to the ones raised by the Moon on Earth?
4
What is the minimum mass of a celestial object so that it can have a moon?
18
Can Newton's gravity equation explain why black holes are so strong?