The contents of potential "message" in the Wow! signal lost?

The Wow! signal is still an enigma.

I understand the incredibly high signal strength it entails. This during some time-period because the sweep of the alignment (or rather the receiving station). That could explain the rise and falloff. This because the horns tracking of that part of sky, once, because of earths movement.

The signal never returned. Everybody understands the narrow band of the signal, and the frequency of the hydrogen line. This incredible signal strength was logged, but only that, the spectacular strength.

But the contents of said signal was not logged, it was not even capable of recording that. Is this right? Is there a possibility that the burst could have carried information, however unlikely? It could have carried a one-time "message"? Is this correct?

I'm not an expert in this, but it's a fun little blip in the history of SETI. Pretty much the only blip I think.

I understand the incredibly high signal strength it entails.

I wouldn't call it "incredibly high". It peaked at 30 times normal. source, and that's inside the "waterhole" a frequency range where the background radiation is the lowest in the cosmos. 30 times a normally very low signal is still pretty small, I think. It was unusual, no question, but looking at the sheet of paper most often reprinted in articles about this, each space is 12 seconds, there are a handful of visible spikes. 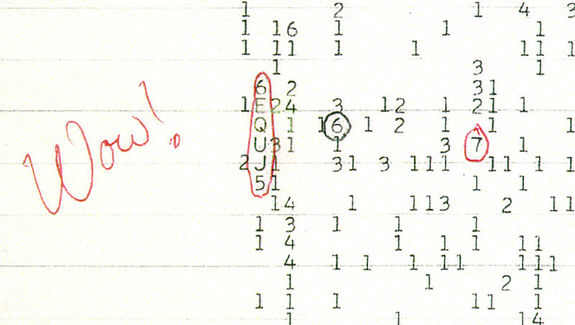 In 1977 they couldn't turn the dishes, so they had to wait 24 hours to scan that part of the sky again and 24 hours later, and every day since, and no similar signals have ever been found, so yeah, it's a mystery.

The way they had it set up, they couldn't tell which dish either, so there's 2 tiny slices of the sky that it might have come from, or it could have (theoretically) come from a ship of some sort transmitting it's location back to it's home planet, and the earth just passed through (or it could have been a mouse chewing on a wire, or a Russian prank) . . . it could have been lots of things.

In 1980 they set up the ability to have the dishes track a specific part of space, which would have come in handy in 1977, but new new signals of that strength were ever heard.

And, you're right, the big ear wasn't designed to record. As I understand it, the system was designed to eliminate background signals, so if both dish's caught similar wavelengths while pointing at slightly different parts of the sky the duplication could be eliminated. It was what one received that the other didn't that was printed on paper, but no way to tell which dish did the receiving.

Some cool pictures and write-ups about the Big ear here and here. It was a monster of engineering for the 1950s when it was designed but it's primitive by today's standards. The Wow signal has no triangulation to verify if it was from outer-space vs a closer event, and they couldn't turn their equipment to track it. It was initially designed to look deep into space, by the way, not to record alien signals. Seti began using it in 1973 after it was somewhat obsolete for more traditional astronomical pursuits, but throughout the 60s it was one of the better observatories. Another problem, it didn't detect a wide range of radio waves, just a tight band, which is good for looking for a signal, but less good for eliminating rare stellar events that might have spanned a broader range of radio-frequencies. Some possibilities here for stellar explanations and without triangulation, the possibility of rare atmospheric reflection of some kind seems possible too.

The 6 data points looks like a bell curve and that's exactly what we should expect if we pass through a tight signal. It's not what I'd expect if a signal was directed at us, but passing through a tight beam would explain the bell curve of the spike. A black hole in that part of space might explain it too.

The "one time message" idea strikes me as very unlikely because I don't see any point to it. I also don't think a lot of information could be contained in 72 seconds, but some could, but there's no point in sending information for just 72 seconds and just once. The point of sending information is so the person on the other end receives it.

But if it was Technology based and not natural in origin, Radio-waves can carry a lot of information, otherwise radios and antenna televisions wouldn't work, but the information is contained in signal variation usually in either amplitude or frequency, like these images below

The big ear measured total signal variation between the disks every 12 seconds, so it wouldn't detect Amplitude or Frequency variations that would happen in much shorter intervals than 12 seconds. We simply have no way of knowing. Another possible method to transmit a information could perhaps be polarization variation in a consistent signal, but big ear couldn't pick that up either.

The problem is, we simply don't have enough information to know. It's like somebody snapped a terrible picture of something that might have happened. You can look at the picture forever, but it will never give you any new information.

More on it here, and I liked this article here. Hope that wasn't too wordy or too much already known information.

Not the answer you're looking for? Browse other questions tagged radio-astronomy extra-terrestrial .

8
Does the radio signal decay when it travels through the intergalactic space?
7
What is the maximum transmission distance of the radio signal in the outer space which could still be understood?
10
If the Wow! signal was not directed at us, then where?
5
Is broadcasting the location of Earth to potential extraterrestial civilization regulated?
2
Is the delay to correlate the signal from one dish to another on a VLA radio telescope longer for red shifted objects?
1
Did comets 266P/Christensen or P/2008 Y2 (Gibbs) cause the Wow! signal?
3
What was the field of view of the Ohio State University Radio Observatory of Wow! signal fame?
6
Highest frequency that's been imaged by a radio telescope?
2
About coordinate systems and angle differences