Are we still going to have rainbows if Sun is replaced by another star?

Rainbow is a property of light splitting due to the water molecule present in the clouds and is related to the light emitted by our Sun. Our sun is a yellow star. Now if we replace sun by a blue giant star or red giant star, or any other star of different color, are we still going to have rainbows? If yes is it still going to compose of seven colors? What kind of possible change will occurs, if any?

Rainbows would lack most blue, and some green for red stars. For a blue star, the blue part of the rainbow would be more intense.

For more complex colors, the rainbow may show some gaps. A rainbow is essentially a spectrum of that star light portion, which is visible to our eyes, and to which the atmosphere is transparent.

Stars vary in brightness. A blue giant would be large and glaring, a red dwarf faint.

Colors in the rainbow would be blurred, hence closer to white, for large stars, and sharper, more distinct, for small stars, according to the angular size of the respective light source.

... This all assumes, that there is still rain. With small, red stars, it would get too cold for rain. With large blue stars, Earth would heat up too much. To adjust for these effects, the distance to the star would need to be modified. And of course, the length of a year, and the orbital velocity may change. This could then cause different tides, changes in volcanism, etc.

Exchanging the star could cause various other effects, too, other polar lights, effects to the ionosphere, the ozone layer, atmospheric erosion, more...

The colors that we see in rainbows has to do with a few things. First, its the variability of the index of refraction of water as a function of wavelength. Since the index of refraction is different at different wavelengths, as light propagates through the water, the different colors split up. This happens over a wide range of wavelengths outside of the visible range as seen below (data from here, I edited the plot because excel did something strange stretching out the x-scale) 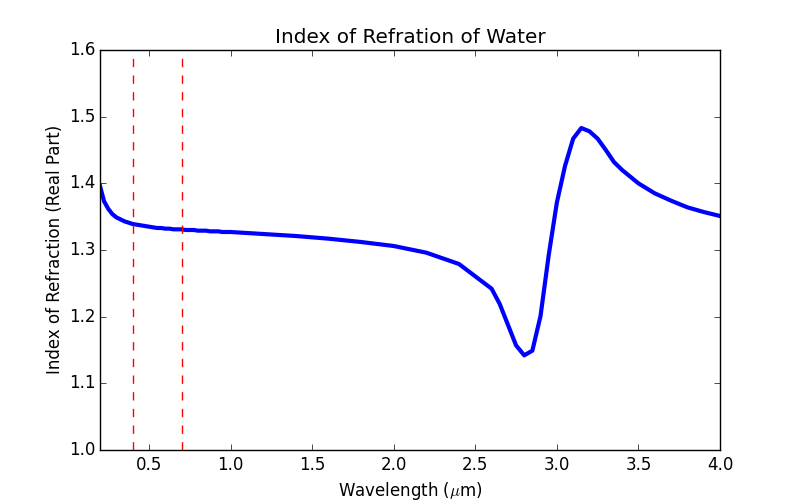 You can see that in the visible range ($\sim 0.4\mu\text{m}-0.7\mu\text{m}$, dashed red lines), the slope of the index is not very large compared to other parts of the spectrum, so for stars of different colors, you might see a larger spread in the colors in the rainbow, allowing you do distinguish between more or less wavelengths of light depending on what part of the spectrum you are in (if you could perceive this light, I'll discuss this later).

Second, the rainbow that we see is dependent on the sensitivity of our eyes at certain wavelengths. There are more colors in the rainbow than we can perceive beyond red and violent (hence the names infrared and ultraviolet). In within the visible spectrum, the rods and cones in our eyes can only distinguish between so many wavelengths. Also, the concept of "different" colors outside of our visible range doesn't have much meaning either, since we don't know how they would be distinguished.

Finally, for different stars, the colors that you would see would really depend on what light is coming from the stars and where they fall on this curve. Our visible range is fixed, so if we confine ourselves to that, the colors won't change much, but the relative brightness between them will. And as the stars light changes color range, some colors will appear brighter than the would from the sun. Others may be to faint to perceive. If we had a wider range of sensitivity, it would be more colorful than we could possibly imagine in some cases.

Just for completeness, here's another angle:

Yes, as Joseph von Fraunhofer and many other people have demonstrated.

There's a whole scientific discipline that, putting things somewhat simplistically, involves making rainbows out of the starlight from non-Sol stars and seeing what they look like. It is optical stellar spectroscopy. So yes, there already are such rainbows, and people do know how they differ from the ones made by light from Sol.

Get into that in detail, of course, and one learns that "Sol is a yellow star" and "There are seven colours." are (gross) simplifications. You've already seen from other answers here that there is a wealth of complexities, including the effect of the local star upon weather and the existence of liquid water rain, questions about what atmosphere one has and what time of day it is, and how much atmosphere (and indeed what purity of water) one is looking through. The study of rainbows is actually quite complex.

Given that, it's quite difficult to answer such questions, because Sol is not really yellow, that largely being an artefact of looking at a star that emits all colours through a certain atmosphere in a certain way; and there are only "seven colours" if (a) one adopts certain cultural and linguistic biases and (b) one ignores the rest of the electromagnetic spectrum, which astronomers most definitely do not (radio and x-ray stellar spectroscopy also being scientific disciplines).

Sticking to visible light for the sake of simplicity, therefore: Here is a set of "rainbows" made from other stars by the Kitt Peak National Observatory 0.9m Telescope on the 30th of May, 2000: 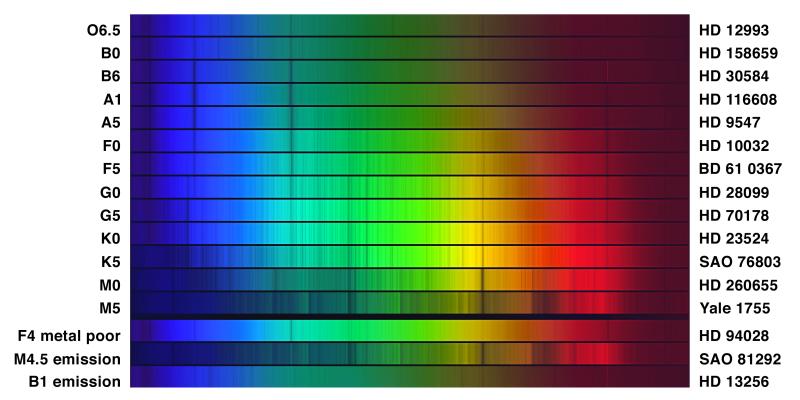 The codes down the right hand side are astronomical stellar catalogue numbers of the individual stars whose light was used to make each one. This should give you the beginnings of an idea of what rainbows made by different stars would look like. But it's quite a complex thing. Just look at what a solar rainbow really looks like. Here's what a solar rainbow looks like when viewed in great detail (by the McMath-Pierce Solar Observatory on the 30th of August, 2000): 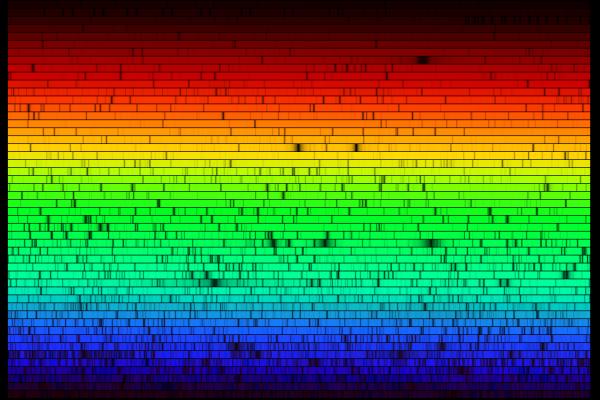 It's not yellow, and there are a lot more than seven colours. ☺

A proxy would be Moonbows, Lunar rainbows. I created them as a child by simply spraying a mist of water from a garden hose during a full Moon. It was much fainter and bluer in the night than on many of the long exposure professional photos one can find of it.

The Moon reflects only parts of the Sun's spectrum and it generates a different kind of rainbow. I bet that this is true for different stars too. There will still be some kind of bow, for sure, as long as you can see the star or whatever reflects its light brightly enough.

The image below is said to be natural as seen through the water spray of Victoria Falls. (I hope it is not caused by the background city lights! That they look bright only because of the long exposure needed to capture the colors out clearly). Some moonbows and starbows can be caused by atmospheric ice crystals or dust storms. 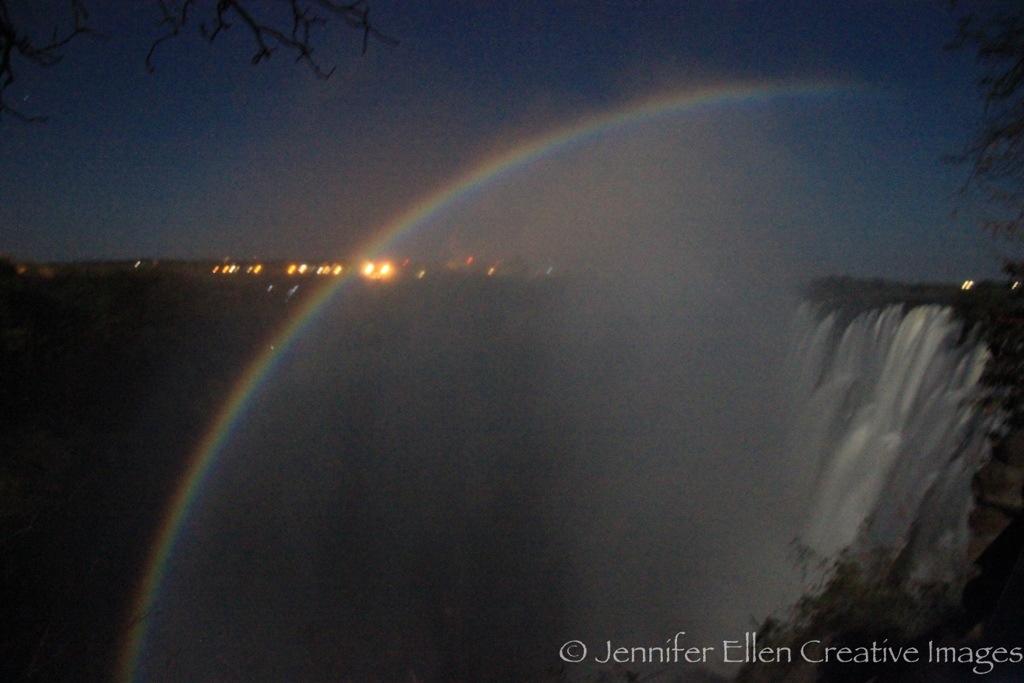 For most stars (probably all stars) out there the answer is yes. Stars are blackbody emitters, which means that the light they emit is based on their surface temperature. A blackbody emitter emits all frequencies of light lower than a certain cutoff. Any star with a higher surface temperature than our own Sun would have a higher frequency (bluer) peak emission. However, they also emit more light at every frequency below that than a cooler star would. So hotter stars will emit more red light, more blue light, more green light, more infrared light, more radio light, etc.

So our only worry are stars that are cooler. It turns out that it's not until you reach an effective surface temperature of around 2500K that you really start to have a huge drop-off in the blue and green part of the spectrum. There aren't any stars that I know of that are this cool. The lower end of the temperature spectrum tends to be around 3500K for very red stars. All the colours of the rainbow would be fainter than they would with our star, but they should still be detectable.

The different compositions of stars result in certain black lines (absence of light at that frequency) in the rainbow if you look closely enough. However, this happens even with our own star, and we can't see it until we use a spectrometer - the lines simply aren't wide enough and the rainbow is too compressed for us to notice with the naked eye.

Of course this is all assuming you could hold everything else on Earth constant and switch out stars like you would a light bulb. The biggest factor in creating rainbows are the composition of the atmosphere, the size of raindrops, and the ability to actually create rain. All of these would begin to change once our star is replaced. Sometimes very rapidly, as in the case of an O class star (or a star that goes supernova from being shaken too hard during transport to our solar system).

Yes, of course. The passage of light through raindrops (or hosepipe spray, waterfalls etc) would be the same. And your shadow would still point to the rainbow.

Not the answer you're looking for? Browse other questions tagged star the-sun light or ask your own question.

3
Does the Sun have hard radiation?
2
Relationship between metallicity and color? Should Pop. I stars be blue?
8
What are the chances of a star colliding with another during a galactic collision?
4
Solar visible light spectrum
0
Hypothetically, if our sun was yellow would we still see “white” colours?
5
Do all stars of a given age and mass have relatively the same emission spectrum?
1
How does energy (from fusion reactions still inside the sun) still have gravitational attraction?
28
What are the odds that the Sun hits another star?