What exactly is 'eastward movement'

I am reading a book on spherical astronomy. Surprisingly, my problem is not with the mathematics. The author mentions several times words like 'eastward movement' and 'westward movement'. For example, the Earth revolves around the Sun in an eastward direction. When I look at the diagram from the perspective of someone above the north pole of the Sun, the Earth seems to go around the Sun in an anticlockwise manner. My problem is I don't understand what is meant by eastward movement ? Can someone explain what this means without ambiguity ? Is there some sort of a right-hand rule that one can follow such as Fleming's right-hand rule in electricity ?

From the point of view of an observer hovering above the Earth's surface, the rotation of the Earth is eastward. That is, points on the surface appear to move in an easterly direction as the Earth spins.

Extending this to the orbital motion, there are at least two possible interpretations. One is that the spin angular momentum and orbital angular momentum are in the same direction. This is roughly true (and certainly closer to true than the opposite). Another interpretation would be that the Earth moves around in its orbit such that it heads in an easterly direction when referred to a longitude on the Sun. This is also approximately true.

If you are asking what is a general definition of the north pole, then I suppose it could be the direction of the angular momentum vector. Then yes indeed, the right hand grip rule tells you the spin is eastward as it relates to north. 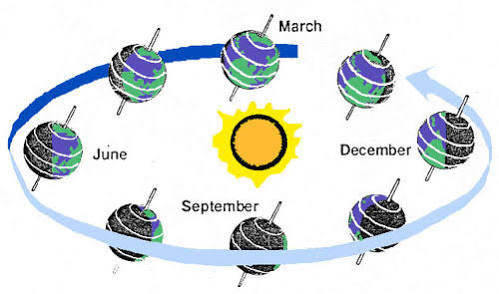 Eastward movement mentioned in the book that you're reading means that if you view the earth revolving around the sun from a vantage point in the solar system and if you kept the north pole upwards in your frame of reference, you would observe the earth going towards the right, around the sun. And if you moved to a point in the solar system where you can see the north pole of the earth as well as of the sun, you would see the earth moving anti clockwise in its orbit.

Not the answer you're looking for? Browse other questions tagged fundamental-astronomy movement or ask your own question.

4
Are there good animations of the movement of proximate stars over long time periods?
19
What would the night sky look like if the Milky Way were the only galaxy in the universe?
1
Our Solar System’s interstellar movement in relation to the Alpha Centauri System
3
What does half-lit means?
6
What do the months and hours mean in Tomas Filsinger's Map of The Universe
44
Does the sun cross other spiral arms in its movement around the galaxy's center?