Is there graphic of typical temporal paths that stars take through the Hertzsprung-Russell diagram?

This is typically a bit tricky to show because (1) some phases (e.g. the main sequence) are much, much longer lived than other phases and (2) a number of phases are spaced very close together in HR-space.

Be that as it may: any elementary text book on stellar structure will guide you through the path of a star through the HR diagram, usually accompanied by pictures. The book by Prialnik on this subject matter, or Ostlie & Carroll, are both excellent.

Here is a very crude version of the temporal path through the HR diagram I made some time ago. Numbers show the different phases (2 is MS), colorcoding shows the ages. 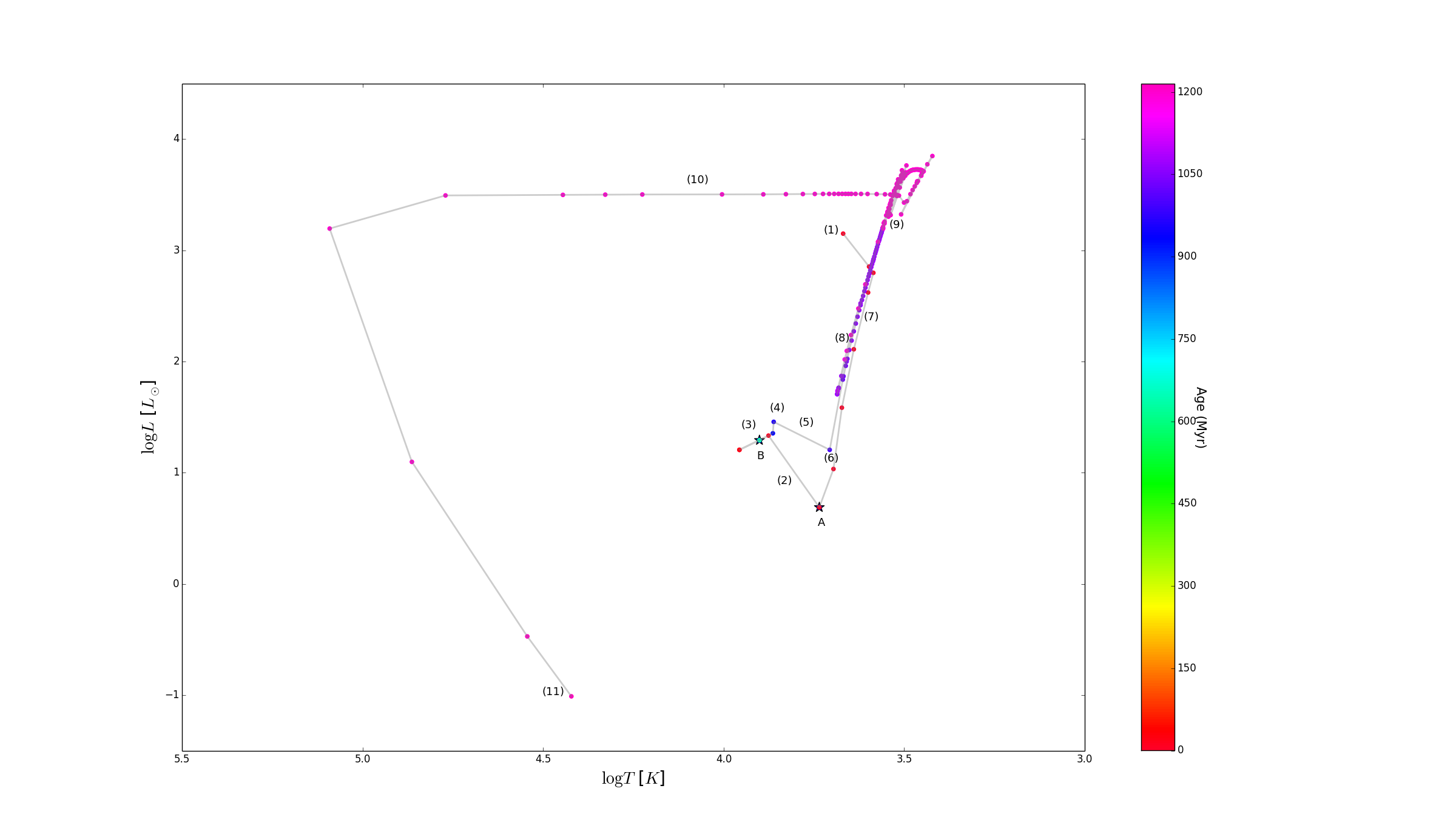 There are a number of illustrations of this on the Stellar evolution page of wikipedia.

Roughly a star begins as a large but cool ball of contracting gas, to the right of the main sequence until fusion starts in its core.

Once fusion starts it has reached the main sequence. It gradually moves up as it slowly brightens during its life, and then moves to the right and up as it expands into a red giant. There are then some significant movements as heavier elements begin to fuse. Sun-like stars undergo a significant change when the helium fuses in a matter of days (or less according to some models), called the Helium flash. As this occurs, the star moves significantly down and left, back towards the main sequence, before expanding again into an even larger red giant. The expelling its outer layers in a planetary nebula, and rapidly moving to the left and down.

Larger stars undergo other fluctuations, changing from red supergiants, to Luminous Blue Variables, and Wolf-Rayet stars, and ending in a supernova.

There are several illustrations of this on the wikipedia page, but noting the sometimes significant differences between the diagrams suggests that this is a topic in which the details are not certain, in part due to the difficulty in getting observational evidence of changes in stars, which occur over very long time scales.

Not the answer you're looking for? Browse other questions tagged stellar-evolution or ask your own question.

0
Putting mass-luminosity relation and Hertzsprung-Russel diagrams together leads us to a mass-age relation; so how do stars lose their mass over time?
13
Is “Main Sequence” a temporal sequence?
0
Description of Henyey tracks on wikipedia incorrect?
2
Can someone explain this diagram showing the spectral type distribution of bright stars
8
Why is $H_\delta$ prominent in type A stars?
1
Is the turn-off point of the main sequence the same as the terminal-age main sequence?
8
The colour of blue dwarf stars
1
How can red supergiants be cooler than dwarfs of the same spectral type?
0
“Early” and “late” nomenclature regarding O, B & K, M stars