What it says on the tin: using the most efficient launch opportunity afforded by orbital mechanics, what delta-v would you have to impart to a payload to send it from the surface of Mercury to crash on the surface of Venus?

Exiting the Hohmann transfer and soft landing on Venus would take 11.9 km/s if Venus had no atmosphere. But much, maybe all of that 11.9 km/s could be done by aerobraking.

I used my Hohmann spreadsheet to get these numbers.

If you launch from the side of Mercury furthest from the Sun, parallel to the horizon in the direction of Mercury's orbit at 13 km/s when the Mercury-Sun-Venus angle is 53 degrees, your payload will reach Venus in 35 days, and its path would look something like this (each black dot = 1 day). IMPORTANT CAVEATS BELOW IMAGE. 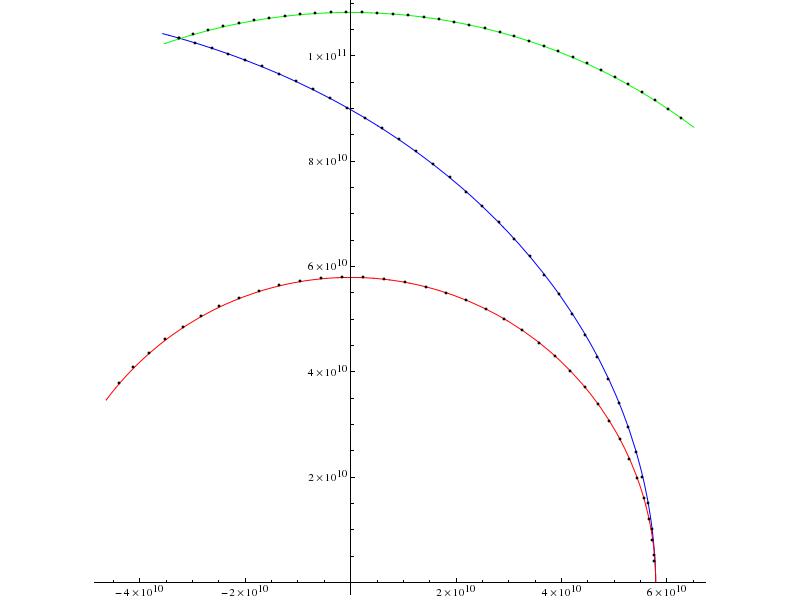 This doesn't really answer your question, since I'm not sure 13 km/s is the minimal required speed. I also made several simplifying assumptions (perhaps too many), so the answer above isn't exact.

Here's the heavily commented Mathematica script I wrote, which also explains the simplifications I made.

3
Can Mercury hit Earth or Mars in the next 5 billion years?
11
Are there ever any simultaneous transits of both Mercury and Venus as seen from the Earth?
1
What does the surface of Mercury look like?
0
Can young surface of Venus be caused by early oceans instead of global resurface event?
6
Does light from the sun reach the surface of Venus
3
What is the highest point on Mercury?
1
Launch windows for Venus transit; how to convert heliocentric longitudes to date?
5
Can Mercury be seen from the 60th parallel north on Earth? Shetland, Faroe, Norway, St Petersburg, Alaska