What is the physical, geometric shape of the universe?

I'm not asking about theoretical ball, vs saddle, vs flat surface which is just a metaphor with 2D space.

It's hard to say as we see very little of it, and we see them in the past because light travels for so long. But what we do know is that it is inflating (not exploding as one might thing from the "big bang" naming).

How would the universe look like, if we were to freeze it in a moment, is it likely to be a ball, or rugby ball, a cone or a sort of an irregular shape?

Is it filled throughout with galaxies, dust, black-holes, or does it live on the edges of its 3D shape, and the central part is "empty"?

Does it have a giant black hole or a star in the middle around which everything revolves?

Ok, maybe you have some misconceptions.

The Universe has no center at all. It looks the same from avaery point, to wherever you look to. It is approximatedly as follows:

This image represents a very large scale box on our universe on current time (not on perceived time, based on received light). Of course, it is just a computer simulation. Each dot represents a cluster of galaxies.

So you need to imagine an infinite tridimensional space filled with filament-like structures like these. And infinite means it has no bounds, so it has no "external" shape. No ball, rugby-ball nor cone there. Also not irregular external shape, just infinite. Any of these shapes have a 2D boundary on a 3D space, but the universe has no boundary.

The overall geometry and topology of the universe has been investigated by the Planck mission. Some results are described in this paper. Final results are not yet available.

We have calculated the Bayesian likelihood for speciﬁc topological models in universes with locally ﬂat, hyperbolic and spherical geometries, all of which ﬁnd no evidence for a multiply-connected topology with a fundamental domain within the last scattering surface. After calibration on simulations, direct searches for matching circles resulting from the intersection of the fundamental topological domain with the surface of last scattering also give a null result at high conﬁdence ... Future Planck measurement of CMB polarization will allow us to further test models of anisotropic geometries and non-trivial topologies and may provide more deﬁnitive conclusions, for example allowing us to moderately extend the sensitivity to large-scale topology.

The amount of anisotropy of the universe is going to be inferred from the cosmic microwave background (CMB). 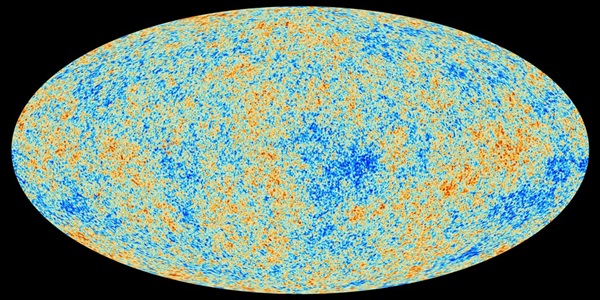 Higher resolved images of the CMB can be found here

The universe is roughly a 4-dimensional spacetime with the big bang as a singularity. It has no edges in the 3d space when travelling. When looking to the past the border, if you like to call it like this, is the big bang. The big bang looks to us on Earth like being in a distance of 13.81 billion (13.81e9) light years in any direction. Or being 13.81 billion years in the past as light needed that time to travel to us. But we cannot travel to that boundary, because the universe expands faster than we (or light) can travel. We had to travel into the past or faster than light to get there, no matter in which spacial direction.

The universe, when looking to a fixed age of say 13.81 billion years is filled almost homogeneously with galaxies on the very large scale. Locally galaxies are grouped to clusters and superclusters. Superclusters form kind of a 3d-net. But there aren't totally void regions. There is always some gas or some dust or some plasma or some fast-travelling cosmic rays, neutrinos, etc.

2
If the universe is 'flat', what shape is it?
46
What is in the center of the universe?
2
Is our universe flat?
2
Is spacetime hyperbolic?