How frequently does a comet drastically change its orbit in the Solar System (like 67P did in 1959)?

Comet 67P/Churyumov–Gerasimenko flew by Jupiter at only 0.05 AU distance in 1959. This encounter lowered its perihelion from 2.7 to 1.3 AU (almost becoming an Earth crossing comet). Since it happens to be the target of the Rosetta mission (and was picked only because of a launch delay), I wonder if it is as common as it seems that a 4+ billion year old comet shifted its orbit drastically less than 60 years ago?

How many known comets are known to have had their orbits substantially changed by a single flyby?

How many known comets are known to have had their orbits substantially changed by a single flyby?

Based on their orbital characteristics, short-period comets are thought to originate from the centaurs and the Kuiper belt/scattered disc

Short Period Comets also have a limited lifespan. Halley's for example, with a perihelion of 0.6 AU, which is closer to the sun than Venus, it loses a significant amount of ice every time it flies past the sun and Halley's may lose all of it's ice within a hundred or so more fly-bys. Source

Most Short Period comets are also planet crossers because they have highly elliptical orbits and planet crossing orbits aren't long term stable either. So of the 586 known short period comets, it's safe to say they have an lifespan of (probably) less than a million years when averaged out. Also, if you consider that Jupiter can work both ways, it can pull comets out of the inner solar system as well as toss them in, then you can work out that they would need to be replaced at least fairly often, perhaps on the scale of every 100 years or so, perhaps on the scale of decades. (there's probably more accurate estimates out there, my estimate is on the rough side)

There's a great deal of variation with individual comets life spans though. For example, a Halley-type orbit (see picture) doesn't cross Jupiter's orbit due to the 18 degree inclination, but Halley type comets are more rare (75 known per Wikipedia article above). Jupiter family short period comets are more common (511 known), and those are also more likely to get jostled by Jupiter since they cross Jupiter's orbit. 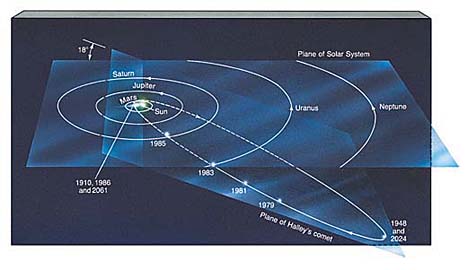 Wikipedia also mentions Main-belt comets, but those aren't what I think of as traditional comets as they orbit within the asteroid belt and don't have highly elliptical orbits. Because the Asteroid belt is mostly stable in a kind of gravitational zone between Jupiter and Mars, those "comets" may have been there for billions of years, and are only beginning to show comet like features as the sun has increased in luminosity.

The most common type of comet, long period comets, per the article, some 4,600 of them and about 10 new ones discovered every year and many many more exist but have not been discovered. The Oort cloud has perhaps more than a trillion "potential" comets, or cosmic icy objects 1 KM or greater in diameter. Source.

I don't know enough to say how Oort cloud objects are directed toward the inner solar system on average. With so many objects, it's possible that some Oort cloud objects naturally formed with high enough eccentricity to pass through the inner solar-system once an orbit. Some might be deflected by objects like Planet Nine (assuming it exists) or by repeated passes of dwarf planets or by the occasional pass of a rogue planet or the very rare close pass of another star, but it's way above my paygrade to try to estimate by which method Oort cloud comets are usually directed into the inner solar-system. A percentage of those probably pass close enough to Jupiter or one of the other gas giants for a measurable deflection but I couldn't even guess what percentage. Since these are the most common comets, it's very hard to give an estimate to your question in relation to these.

Loosely related, but Shoemaker-Levy was captured into Jupiter's orbit around 1960 or 1970. It's hard to know what it's orbit was before then because the calculations are difficult, but it had to be a Jupiter crosser of some kind. It's apogee (.33 AU) extended outside of Jupiter's Sphere of influence, which works out to about .22 AU, but it was a stable enough orbit to make a few cycles before crashing into Jupiter in 1994.

Jupiter's sphere of influence (.44 AU in diameter) is barely over 1% of it's orbital journey around the sun, but over hundreds or thousands of orbits, 1% is enough to clean out or deflect most of the objects that cross it's path.

Comet Ison, a long period comet was also (virtually) destroyed when it passed around the sun close enough to break apart in November 2013. Comets seem to die fairly frequently. Fortunately (or perhaps unfortunately), there's trillions more where they came from. :-)

Hope that wasn't too vague an answer, but I think the short answer, based on deduction is that events like the one you mention with Jupiter deflecting Comet 67P are reasonably common, maybe every few decades, maybe once a century. They're not rare events. Earth will measurably deflect a small asteroid in 2029. Asteroids are much more common than comets, but Earth is also much smaller than Jupiter. Icy bodes are likely to pass close enough to Jupiter to have a significant deflection every so often and there's about a 50/50 chance on whether that deflection will push them closer to the sun or further away with a small chance that they will be caught in Jupiter's orbit.

Hope that wasn't too general. Since this had gone unanswered, I thought I'd give it a shot.

6
How does 67P rotate?
3
Where does the dust on 67P/Churyumov-Gerasimenko come from?
2
What does oxygen on comet 67P/Churyumov-Gerasimenko mean?
2
Does the loss of mass create an observable change in a comet's orbit?
6
How long does a comet "live"?
5
Why does Kepler's "Big Picture" of comet 67P look so strange? And what is the significance?
6
How does this comet have alcohol in it?
4
Is a comet necessarily confined to the solar system?
8
How uniformly is cometary debris distributed along the entire orbit of the comet?