Why do the planets in our solar system orbit in the same plane?

Observing the planets orbit of the Sun they all seem relatively planar and roughly all orbit along the same plane.

Is this due to the way that our Solar system was formed or is this a physical phenomena observed in other systems? 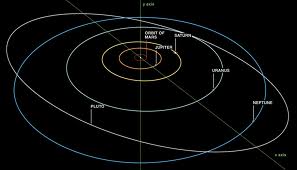 In the protostar stage of the Sun, it was surrounded by a (spinning) gas cloud. This cloud behaved like a fluid (well, a gas is a fluid), so it flattened out into an accretion disk due to conservation of angular momentum. The planets eventually formed from the dust/gas in the disk from compression of the dust in the disk. This process won't end up moving the dust out of the plane (all the vertical force of gravity is toward the disk), so the final planet is in the plane too.

Why does an accretion disk have to be flat? Well, firstly, let's imagine the protostar and gas cloud before the accretion disk formed. Usually such a setup will have particles spinning in mostly one direction. The ones spinning in retrograde orbits will end up reversing themselves due to collisions.

In this gas sphere, there will be an equal number of particles with positive and negative vertical velocities (at a given point in time; due to rotation the velocity signs will flip). From collisions, eventually these will all become zero.

A particle revolving around a planet will always revolve such that the projection on the planet is a great circle. Thus we cannot have a particle with vertical velocity zero but with vertical position nonzero (as that would imply an orbit that isn't a great circle). So as the vertical velocity decreases, the orbit inclination decreases too. Eventually leading to an accretion disk with very little vertical spread.

2
Flatness of celestial systems like galaxies and Solar System
2
are all the planet in the same plane?
16
Why is the solar system often shown as a 2D plane?
10
What decides the direction in which the accretion disk spins?
0
Alignments of planets
0
Could we estimate the age of the universe based on the planar property of the Solar System?

11
What might cause a planet to have a significant tilt in their orbit?
8
Why do the planets in the Solar system stay in the same orbital plane?
11
Why are most planetary orbits nearly circular
1
Do origin theories imagine each planet to first orbit the Sun very irregularly before stabilizing?
5
Creating a basic "fixed" solar system to host a 3D space travel simulation
3
Why are these objects moving at Vastly Different Speeds along the same orbit?
1
Is there a relation with the noun planet and to be in a plane?
1
View of other planets from the Earth
3
The Solar System formation