Is the duration of a sidereal year stable?

According to this essay by Phil Plait, the duration of Earth's sidereal year is 31,558,149 seconds.

Is this figure stable? If I were to meaure Earth's orbit several million (or billions) of years in the past or future, should I expect to see roughly the same duration?

If not, what would be the cause of any change observed?

It changes some. The solar energy pressing against the Earth from the sun, the kinetic energy from coronal mass ejections hitting the Earth, tidal forces from the Earth-Sun relation and even gravitational tugs form other planets and meteors and space dust that hit the earth all change the Earth's orbit a teeny tiny bit, also, changes in the Sun's mass either by the sun accumulating mass from space dust or comets or losing mass, which most suns do over time. Each tiny orbital change changes the sidereal year (and all the other years) a tiny little bit. Perhaps this only amounts to millionths of a second per year but some of these forces are consistent and can lead to predictable changes over time. Others variable, leading to uncertainty. The long term changes to the Earth's orbital distance are currently unpredictable.

It's generally believed that the Earth is slowly moving away from the sun, but I don't believe there's much agreement on how fast this is currently happening. Articles here and here. The 2nd one estimates 1.5 CM per year or 15 KM per million years which even over a billion years (15,000 KM) is quite a small distance compared to 150 million KM. But estimates are difficult for a variety of reasons.

I asked a related question here, with a bounty and didn't get any definite answers. It's possible to mathematically model the movement of some planets (Jupiter to an extent and Neptune/Uranus and perhaps Saturn based on the Jupiter model). It's thought Jupiter moved both towards then away from the sun over the first few billion years of the solar system. The Moon's distance from the Earth is also mostly predictible and can be modeled back into the past based on the Oceanic tidal bulge, but modeling the Earth;s distance from the sun over the past is much harder. It's a tiny object compared to the Sun and Jupiter and N body systems have a lot of chaos and unpredictability to them. 4 billion years ago it's possible that the Earth was quite a bit closer to the sun, but I don't think anyone has a good model for how much closer. The faint young sun paradox and the theory that young suns eject much more matter and have more active coronal mass ejections suggests to me that the Earth was likely closer to the Sun billions of years ago and not further away.

The earth's orbital eccentricity also changes with time, on a cycle of roughly every 100,000 years but according to Wikipedia, that doesn't change the length of the year, only the shape of the orbit.

Finally, and just for fun, it makes logical sense to me that the Moon orbiting the Earth creates small apparent fluctuations at least from the point of view of the Earth, because the Earth in effect orbits the Earth-Moon barycenter in an ellipse roughly 1/81st the size of the distance to the moon, or about 4,480 KM in radius every 29 days. Depending on whether the Moon is ahead of the earth or behind it, the Earth year can change by as much as 5 minutes. I suspect that this is largely ignored when measuring Earth years though and the Earth-Moon barycenter is used. If we measured the Earth's center we should get much larger variations year to year. (see picture). 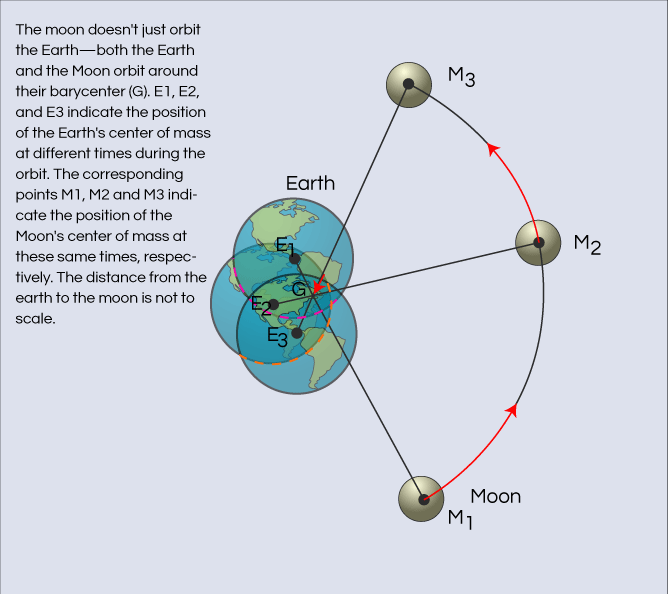 (if anyone can improve on this, feel free, I have the feeling it's only a partial answer, cause logically it makes sense that the Earth-Jupiter positions or Earth-Venus should change, if only slightly, the Sidereal year).*

Unfortunately, I don't have any precise information on the time scales you want (and I doubt that it's possible to make any quantitative statements with any degree of certainty). But vaguely, yes, it will almost certainly be different from today.

However, even on shorter time scales, the duration of the sidereal year is not constant, as a variety of physical effects, primarily perturbations from other objects in the solar system, introduce a certain level of messiness into Earth's orbit.

It fluctuates a little now and then.

The Moon's gravity is responsible for tides. This means that the oceans are not constantly in synch with the planet's rotation. The Moon pulls the oceans back a little and then releases them. This creates drag - a form of friction. However minimal, it is still telling over the millennia. However, certain types of volcano eruptions, along with the tsunami it creates, speeds Earth's rotation up a little bit.

If the mantle and core are in fact liquid, they also create a degree of drag.

This changes (a little bit) the duration of each second. Thus, ancient Roman seconds were a trillionth of a fraction faster than ours, give or take.

That said, the orbit itself fluctuates a little bit. It is believed today that our planet is moving slowly away from the Sun. This would make the orbit longer without changing Earth's velocity. Thus, yes, each year must be getting longer, although the difference is ridiculously small.

Not the answer you're looking for? Browse other questions tagged orbit solar-system earth or ask your own question.

19
How has the Earth's orbit changed over hundreds of millions or billion of years?
1
Do planets have effect on velocity of Earth?

7
If earth changed its orbit, what would happen to the moon?
5
To several decimal places, how many days are in one year?
1
The consequences and the mechanisms of a shift of the Earth away from the sun
2
Is the shortest day duration constant?
5
Do changes in the orbit of the Earth contribute to global warming
2
Why hasn't the Earth fallen into the sun yet?
1
What is the exact time of sun stay in each zodiac every year on sidereal year duration?
1
What would be the year length of a habitable planet of 40 Eridani A?