Say Barry, could you abuse the answer-your-own-question feature of this site, and answer the following question:

The Old Farmer's Almanac for 2014 (and previous years) notes (page 114) that Moon occasionally crosses into 5 "non-Zodiac" constellations at times: 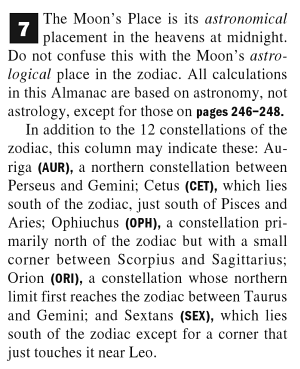 So, exactly which constellations are "in the Zodiac" if the Zodiac extends 9 degrees on either side of the ecliptic?

And why 9 degrees? I know Venus can be as much as 8.25 degrees from the ecliptic,

While I can't answer the 9 degrees part, http://www.space.com/5417-ecliptic-zodiac-work.html notes, the band of the zodiac actually passes through 22 constellations:

In fact, as pointed out by the well-known astronomical calculator, Jean Meeus, along with Ophiuchus, there are nine other constellations that occasionally can be visited by the Moon and planets: Auriga, the Charioteer; Cetus, the Whale; Corvus, the Crow; Crater, the Cup; Hydra, the Water Snake; Orion, the Hunter; Pegasus, the Flying Horse; Scutum, the Shield; and Sextans, the Sextant.

So in truth, there really aren't twelve zodiacal constellations, but twenty-two!

2
How many constellations in the Zodiac?
0
How do I find the signs that planets are in during any given date?
-1
Why are there 12 zodiac signs?
-5
Does planets revolves around all the 88 constellations?