Have we ever observed a body, such as a large asteroid, "hitting" the Sun?

Some other SE questions about launching ICBM's into the sun got me wondering whether we have ever observed an object on a path that intersected with the Sun? How close did it get?

and here's a video of "a Giant Comet Hitting the Sun":

The impact occurred sometime during May 10-11, 2011. The comet was not named but believed to be a member of the Kreutz family of comets

Before this spectacular plunge we had witnessed several other comets graze (come close without hitting) the Sun.

I've included a nice picture of comet Lovejoy after its close approach of the Sun brought it through the Sun's corona around December 15, 2011: 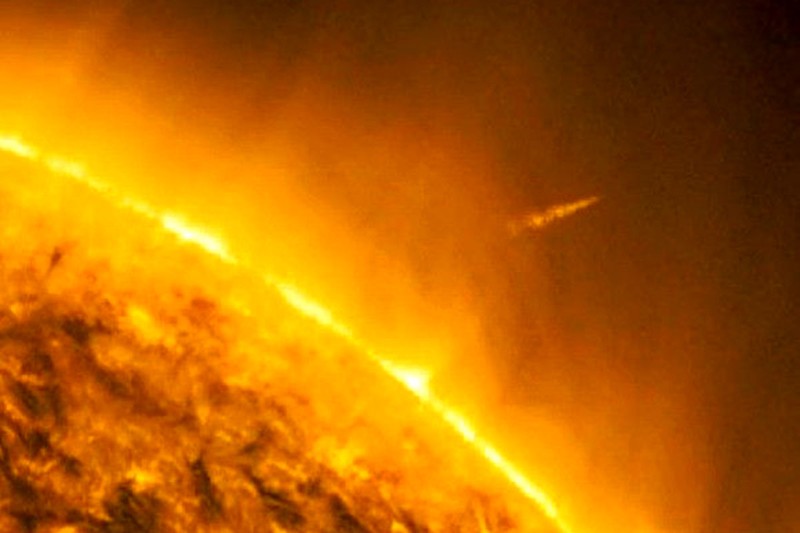 What happens when a comet hits the sun?

If a comet is big enough and passes close enough, the steep fall into the sun’s gravity would accelerate it to more than 600 kilometres per second. At that speed, drag from the sun’s lower atmosphere would flatten the comet into a pancake right before it exploded in an airburst, releasing ultraviolet radiation and X-rays that we could see with modern instruments.

The crash would unleash as much energy as a magnetic flare or coronal mass ejection, but over a much smaller area. “It’s like a bomb being released in the sun’s atmosphere,” Brown says. The momentum propelled by the comet could even make the sun ring like a bell with subsequent sun-quakes echoing through the solar atmosphere.

34
What happens to the 99.9 % of the sun-rays that do not fall on any planets or any other celestial body?
1
Does the KBO 2014-MU69 have two numbers and entries in asteroid databases? How did it get promoted to Major Body designation?
3
Moon's path as seen from Earth
5
What is the closest an asteroid or comet has passed the Sun and survived?
2
How close would the sun have to get to a supermassive black hole to have Jupiter stripped and slingshot into interstellar space?
3
Has a near earth object in heliocentric orbit ever been bright enough to be visible to the unaided eye?
7
What is the difference between a depleted comet and an asteroid?
4
What will happen to a metal asteroid if it impacts the Earth? Will it disintegrate or will it stay intact?
3
Have interference effects (in space) ever been observed by a single instrument, as opposed to interferometry?