Is the Sun really a medium size star?

It is often said that the Sun is a medium size, or even dim star. Is this true?

According to this list of stars within 21 light years, there are, out of the closest 121 stars, only six brighter than the Sun. This means that the Sun is in the top 6%. If you also count brown dwarfs, the Sun ranks even higher.

Doesn't this indicate that the Sun is actually a relatively large star?

It is true that a surprisingly large number of stars are smaller (and thus less massive) than the Sun. However, the stars that are bigger than the Sun are often much bigger.

Look at this chart: 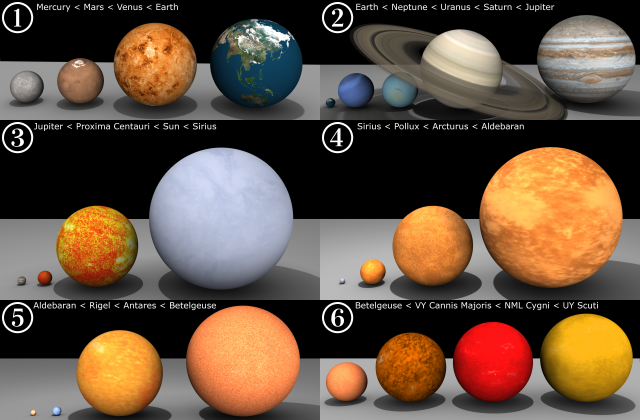 Notice how small the Sun is compared to some of the other stars. It's tiny! It is indeed a small star - in technical terms a main sequence dwarf.

Encyclopedia of Astronomy and Astrophysics

The distribution of masses can be quantified in an initial mass function, typically given in the form $$\xi(m)=km^{-\alpha}$$

When you integrate this over a range of masses, you can find how many stars are within that range. Not surprisingly, this number gets lower and lower as you slide the endpoints to more massive stars. You can see this decrease from the fact that $\xi'(m)<0$, so long as $k>0$ and $\alpha>0$ - which is assumed by the model, according to empirical data.

Not the answer you're looking for? Browse other questions tagged star the-sun size luminosity .

4
Why nobody cares to give the nearest stars better names?
1
Is it possible that in the Local Interstellar Cloud there are undetected stars?
1
Can a star emit a larger fraction of its total light in the visual range than the Sun does
19
Can lightning occur in stars like the Sun?
2
How do we know what the biggest star is?
0
What is the bright star that never seems to move and sometimes the only star in sky?
5
What does a + (plus) mean in stellar classification?
16
Is stellar ignition all-or-nothing?
11
Why haven’t we observed supernova events of the hypothetical population III stars?