Are we sure solar cycle is not related to the orbit of Jupiter?

Are we still debating the relationship between Jupiter and solar cycle? If not, what is the common or mainstream opinion about this topic? Or in other words, have we disproved the solar cycle is related to the "year" of Jupiter?

The barycenter of the Solar System is the effect which should be considered physically. Although dominated by Jupiter other planets have substantial effect too, moving the Sun, with 99+% of all mass in the Solar System, around by entire Solar radii (700,000 km). Illustrated here

The diagram below I happened to stumble upon here. It shows the distance of the barycenter of the Solar System from the center of the Sun over time, with years on the circle. For some reason it spans from year 1773 to 1851. The peaks in the clover curve are regularly separated by about a sunspot cycle, or rather a bit longer. I suppose that the pattern of 2 big and 1 small sequential bulbs there reflects that Jupiter's and Saturn's orbital periods are about 3:1.

As StephenG says, that is just a numerological hint or coincidence, not an explanation. Another example is that the rotational period of the Sun is roughly similar to the orbital period of the Moon around Earth, with a similar error, but no one imagines any connection there.

It is however known that hot Jupiters, giant planets near stars, cause large starspots which rotate along with the planet's orbit. And the relatively tiny moons of Jupiter cause visible spots in the planetary aurora. Actually, the Sun causes an auroral "Jupiter spot"! So there are physics around which under certain conditions create sunspot-like effects. 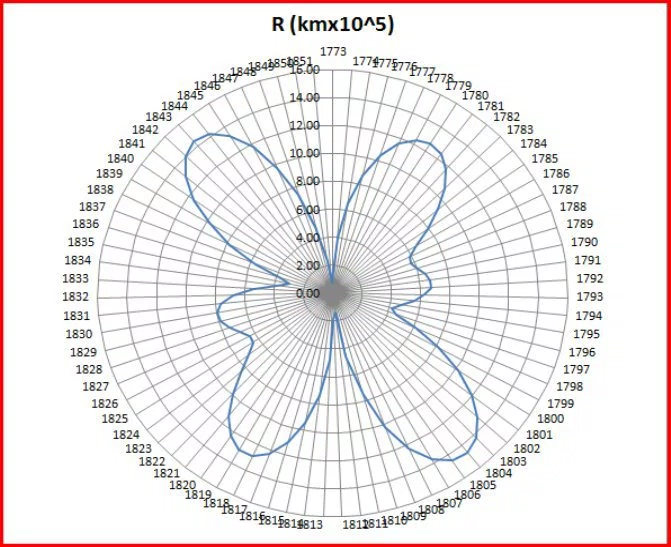 Diagram: Barycenter distance from the Sun's center over time 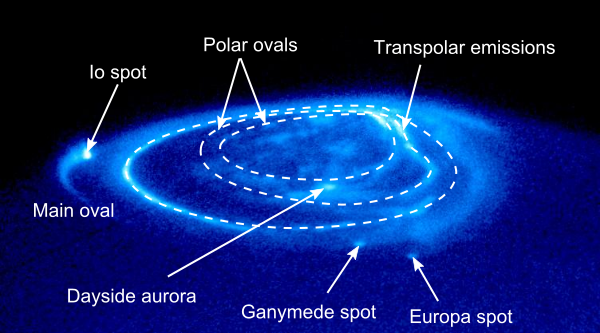 Hubble image:The aurora on a pole of Jupiter in UV

I think for people who want to believe the Jupiter link to solar cycles it will be impossible to disprove. They'll cling to it forever.

I think in a practical sense the "link" is little more than numerology. The force Jupiter can exert on the Sun's atmosphere and internal structure is a minute fraction of the magnetic forces at work generated by the Sun itself.

A simple model helps. Place two magnets a foot apart. Now place a magnet a thousand feet away from both. The effect of the distant magnet is one millionth that of the two close together. That gives you a feel for the relationship between magnetic forces within the Sun's atmosphere and Jupiter's distant influence. And gravity is an even weaker force.

As I understand it the current daring of models is the Double Dynamo, but certainly the dynamo type models ( all relating to electromagnetic fields generated by the Sun ) are the main contenders.

With people who propose the Jupiter link ( often extended to include Saturn ), there is a tendency to do a lot of algebra to find ways to relate various periods without actually justifying the supposed link on the basis of forces at work ( i.e. doing a simulation or a model based on real physics ). This is why I call it numerology.

The dynamo models actually are based on real physics and make predictions, both past and future, which can be tested. This also means the details of these theories can be refined in a proper scientific manner to tease out the truth.

Jupiter's orbital period is 11.862 years.The amount of variation will be miniscule.

The solar cycle, while the average cycle time is 11 years, it can vary from 9 to 14 years. From the wikipedia article:

Since observations began cycles as short as 9 years and as long as 14 years have been observed, and in the double cycle of 1784–1799 one of the two component cycles had to be less than 8 years in length. Significant amplitude variations also occur.

As another answer says, there is a tendency to do a lot of algebra involving planets' periods. Another approach however is examining the timing of actual solar events. In this case, solar flares and their time distribution is related to the relative motion of Jupiter and Saturn, providing predictions.

Not the answer you're looking for? Browse other questions tagged the-sun jupiter or ask your own question.

1
Is there a connection between Jupiter's orbital period and the Sun's solar cycles?

15
What are some theories that explain the 11 year solar cycle?
1
Were there any images of a transitary event of Jupiter or Saturn as imaged by a deep probe mission
7
What point does Earth actually orbit?
1
What are the lines in this Solar Cycle graph?
3
Are there known centaurs which orbit between Jupiter and Saturn without crossing their orbits?
2
If Jupiter were to absorb all other planets in the solar system, would it reach degeneracy pressure?
3
How long do solar eclipses last on Metis?
2
Is it fair to describe a solar flare as a big lightning strike on the sun?
14
How are the solar flares from May 23, 2021 extraordinary?