What is the future of our universe?

Is the universe heading towards a Big Freeze, a Big Rip, a Big Crunch or a Big Bounce? Or is it part of an infinitely recurring cyclic model?

What is the future of our universe?

Is the universe heading towards a Big Freeze, a Big Rip, a Big Crunch or a Big Bounce? Or is it part of an infinitely recurring cyclic model?

I'd say the Big Crunch and the Big Bounce are out. The universe didn't contract when it was small and dense. Instead it expanded, and that expansion is increasing. So it looks like we're in for a Big Freeze. However I wouldn't rule out a Big Rip of sorts. Have a look at page 5 of this paper where Milgrom mentions the strength of space. Then think of the balloon analogy, but make it a bubble-gum balloon, in vacuum. 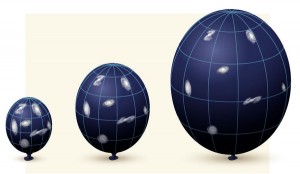 Image courtesy of the one-minute astronomer.

Or is it part of an infinitely recurring cyclic model?

I don't know. I have no evidence to suggest that there's any kind of recycling going on, and I can't think of mechanism by which this might occur. I have of course read about "conformal cyclic cosmology", but I just don't buy it, along with other stuff from Penrose.

Your guess is as good as any cosmologist's.

We don't know how it came into being, not with any confidence. There are theories, but nothing definitive has emerged to explain where it all came from. This may be hotly disputed by proponents of each theory, but we're not there yet, IMO.

We're not sure yet about what all the relevant forces are ( e.g. dark matter, dark energy ) so any theory about how those affect possible futures is simply a complicated guess at this point. This alone, IMO, makes conjectures about the universe's future pointless, IMO.

Not the answer you're looking for? Browse other questions tagged solar-system the-sun earth or ask your own question.

0
Near-future astronomic events that could threaten Earth
14
What is the name of our Solar System?
3
What is the orbital period of our sun around its barycenter?
1
What keeps the planets of the solar system moving in their fixed orbits?
7
Could the Sun and our Solar System one day leave our galaxy?
2
Will Earth rotate backwards in the future?
3
Winter in June in the future for North hemisphere