How can the Kuiper belt coexist with the 9th planet?

There are asteroid belts, and there are collections of bodies in resonant orbits, such as Trojans. Aren't these separate things?

The recent evidence for the 9th planet is an alignment in various parameters of known Kuiper belt objects. Conversely, few or no objects are known in the parts of the belt that would be swept away by the hypothetical planet.

If the Kuiper belt straddles the gravitational neighborhoods of Neptune and this other planet, and its populations reflect their influence, is it really a belt at all? A lopsided belt? Or just a region with a collection of distinct populations, each associated with a dominant body?

The recent evidence for the 9th planet is an alignment in various parameters of known Kuiper belt objects.

These are not Kuiper belt objects. The Kuiper belt is taken to refer to the neighborhood of Neptune resonances. The scattered disc is another population, further out, and the objects relating to Planet 9 are further still. 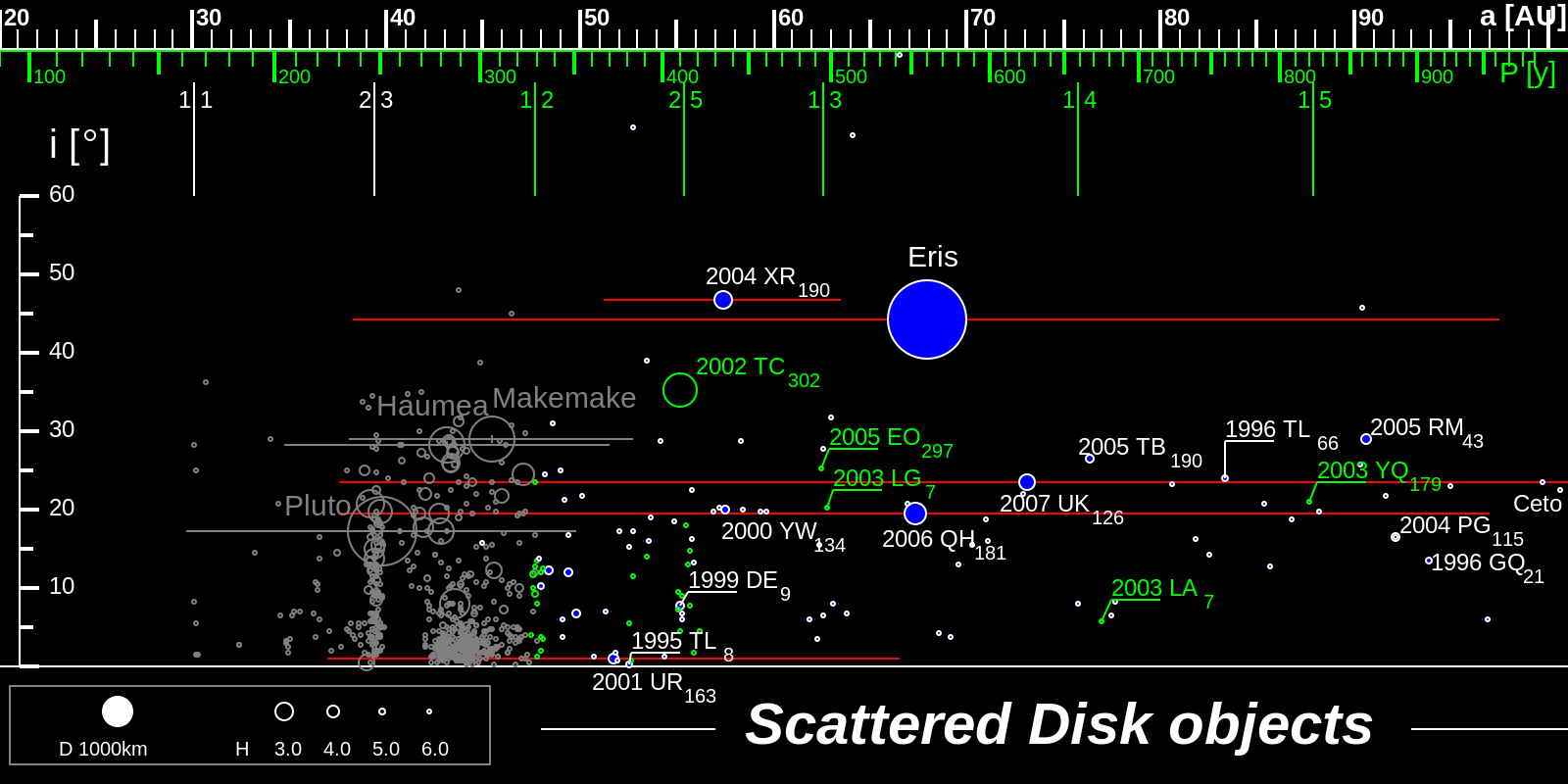 Legend: grey = Kuiper belt, green = integer Neptune resonances, blue = scattered disc. The objects in the recent announcement are all off the chart, although their perihelions are <100 AU.

The shape of the grey splotch at the left of this chart shows that the Kuiper belt is indeed a collection of populations dominated by Neptune. This isn't news, and it's still taken to be a belt. It goes all the way around the solar system and the orbital eccentricities are low.

This postulated planet might help explain the "Kuiper cliff", the otherwise unexpected cutoff before the 2:1 resonance. But, that's another question. Failing that, there's simply no relation between the Kuiper belt and Planet 9 except that they're both very far away.

Not the answer you're looking for? Browse other questions tagged 9th-planet kuiper-belt .

12
How can the orbit of a Kuiper Belt Object be differentiated from the transit of a rogue planet?
3
Retrograde motion and Kuiper Belt Objects
37
9th planet location?
6
What good evidence exists for the 9th planet as spoken of by Caltech?
7
Is Planet Nine shepherding the Kuiper Belt?
18
Could the 9th planet be virtual?
3
How can we map masses orbiting the outer Solar System by determining the orbits of planets and smaller objects?
3
Kuiper belt planet formation
3
Are there recent estimates of Kuiper belt mass?