White holes are purely hypothetical at this point and are considered only because it is assumed something like it could exist as the balance to black-holes.

Reading this article seems mostly writers taking liberties with the information but poses an interesting question. 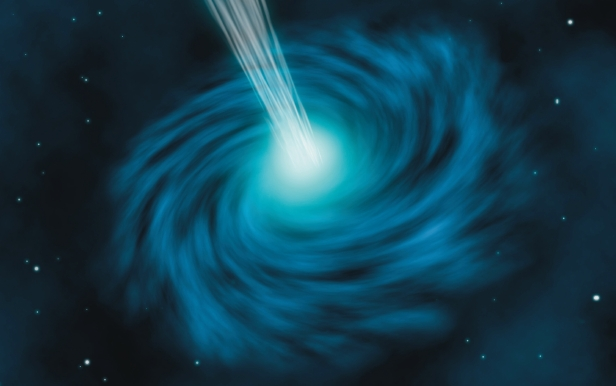 Well according to the article "Have we seen a white hole?" (Byrd, 2011) there are some claims that scientists (specifically "The Revival of White Holes as Small Bangs" (Retter and Heller)) may have detected a white hole; however, this claim seems to be shrouded in controversy, as this observation may actually have a more stellar explanation.

However, the article from Retter and Heller offer a hypothesis as to what white holes are, from the article linked before:

We thus suggest that the emergence of a white hole, which we name a ‘Small Bang’, is spontaneous – all the matter is ejected at a single pulse. Unlike black holes, white holes cannot be continuously observed rather their effect can only be detected around the event itself.

Which, if the authors are correct, would explain why we don't see/detect them and white holes (unlike black holes) are unique because they supposedly spew matter, rather than extract.

One major caveat is that it is not clear as to where this matter that spews out comes from.

5
What is a wormhole?
2
Is there anything like a supermassive white hole? How are they formed? And where are they present?

5
What is a wormhole?
2
Is the white hole a myth or not?
4
What would happen if a Black Hole and White Hole Collided?
2
Is there anything like a supermassive white hole? How are they formed? And where are they present?
1
Does a White hole lies behind a Black hole?