How to calculate when the moon is highest in the sky to the earthbound observer?

Like when is the new moon highest in the sky? Or third quarter? How do I know this for any general moon phase? Thanks.

During spring and autumn, the sun, and the moon follow roughly equal paths, with no phase of the moon being higher in the sky.

Third quarter, being at right angles to the sun will be at an intermediate altitude, in both summer and winter.

For exact calculations either use technology, or a set of astronomical tables and a sharp pencil!

In other words there is no answer based on phase or time of year alone.

Of course time of day is most correlated with moon altitude: full moon is highest around midnight, first quarter at dusk, third quarter at dawn. But the time of year is also a major factor, and can vary the altitude of a moon phase by about 46° as it moves from the top to bottom of the ecliptic.

This table works for both Northern and Southern Hemispheres:

So besides time of day, time of month, and time of year, here are some other factors that affect when you can see the moon where in the sky: 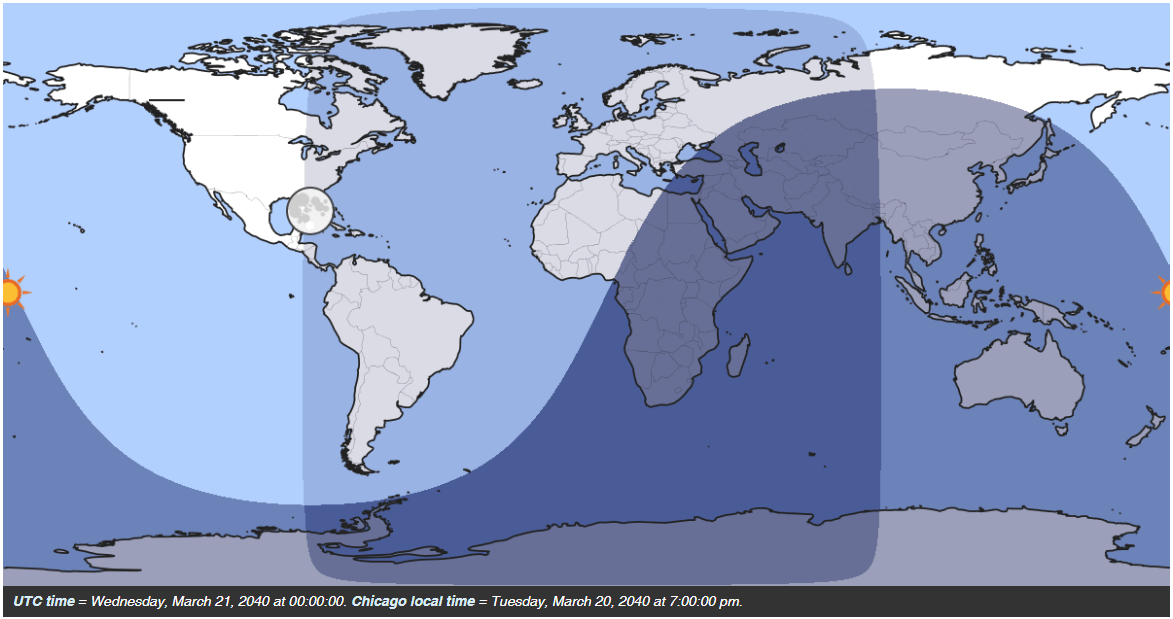 This map shows that the moon will be directly over Florida on March 20, 2040, 7pm local. (Isn't timeanddate.com amazing?) Click the map to see that the moon is in first quarter then, and other details. In this illustration, the brighter illumination is for the moon, the fainter for the sun. But I'm using it primarily to show that the first quarter moon is high in the Florida sky at that time and date. I picked that year so by coincidence the first quarter is near the March equinox, and adjusted so the moon would be right smack dab on top of Florida. But every year:

The first quarter near the March equinox is high in the sky for the Northern Hemisphere.

Not the answer you're looking for? Browse other questions tagged moon-phases .

40
Can the moon appear to be in any position in the sky?

4
How Soon Could a Waxing Crescent Moon Be Seen?
5
What should I consider in order to accurately calculate the moon phase?
1
calculating lunar phases
1
Does a set moon sky equal a new moon sky?
1
What causes the duration of moon phases (the time the moon is visible above the horizon) to vary for an observer in the northern hemisphere?
2
How to calculate the moon phase angle?
1
Simple question about the phases of the Moon
3
How to calculate moon overhead and underfoot time?
3
When can Moon occult Venus?