Is our supercluster part of a galaxy filament?

It was discovered recently that the Milky Way galaxy lies inside a supercluster named Laniakea Supercluster. On the other hand, wikipedia says that galaxy filaments are "the largest known structures in the universe" https://en.wikipedia.org/wiki/Galaxy_filament

The Laniakea Supercluster contains several galaxy filaments, even just reading the wikipedia articles you provided you can see the difference in size of the two:

They are massive, thread-like formations, with a typical length of 50 to 80 megaparsecs, (163 to 261 million light years) that form the boundaries between large voids in the universe.

The reason why Laniakea isn't the largest "structure" in the universe is because it inst a single object, rather an arbitrarily assigned group of galaxies. From this image below you can see how the supercluster is given an imaginary edge based on the peculiar velocities of the galaxies within it, there is no observable edge to the supercluster, unlike galaxy filaments that have visible edges. 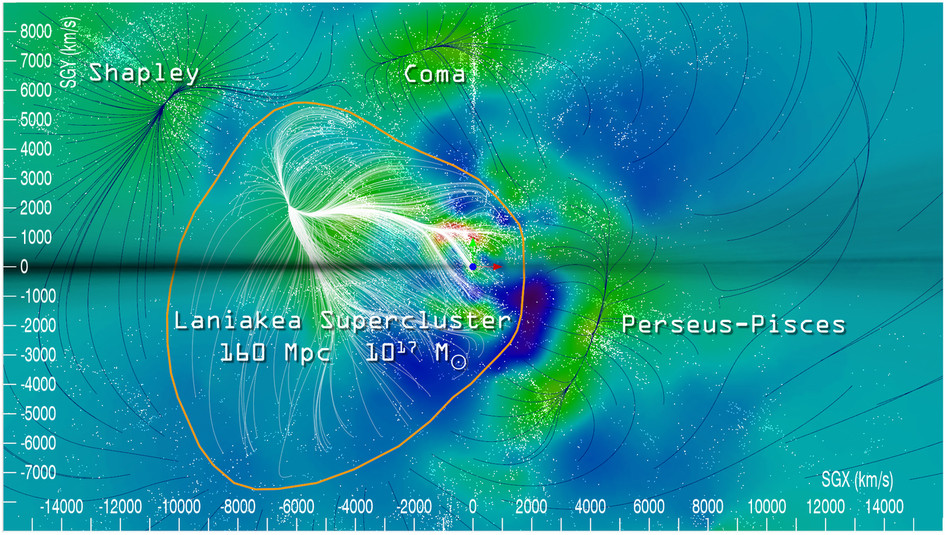 Not the answer you're looking for? Browse other questions tagged milky-way galaxy-cluster or ask your own question.

19
Our galaxy, the Milky Way, forms part of a galaxy group called The Local Group. What are the parameters that dictate what a galaxy group is?
0
Concerning fate of Milky Way Galaxy
10
How do we know that our galaxy is a spiral galaxy?
8
How did the object CO-0.40-0.22 get its name, and how is it distinct from CO-0.40-0.22*?
5
Has a “white hole” theory been advanced to explain anomalous star formation in Sagittarius A?
4
Are there small voids of 10 - 20 megaparsecs also within, and not only between superclusters?
4
Observing the motion of the solar system and galaxy through space?