What conditions would lead to this event around the black hole in the Pictor A galaxy? 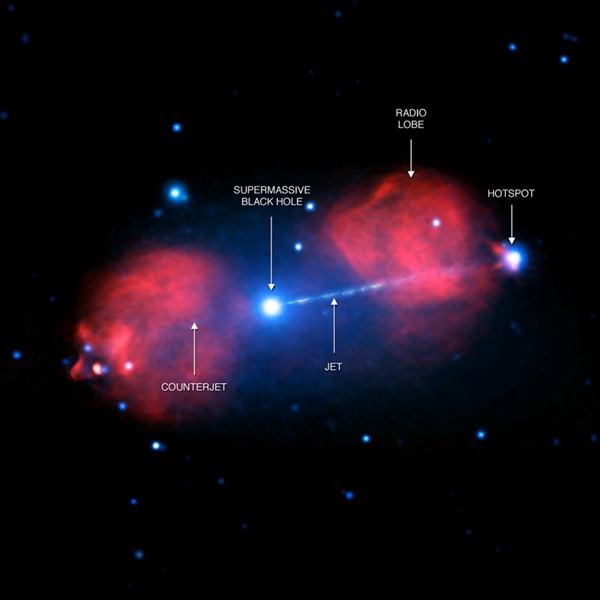 This is a picture of a jet of particles exiting the supermassive black hole in the center of Pictor A galaxy at nearly the speed of light. Source

This event is supposedly created from a black hole of 40 million solar masses. The full quote here:

The newly released picture shows the terrifying power of an actual supermassive black hole located in the galaxy Pictor A, some 500 million light years distant. This black hole is about 40 million times the mass of the Sun (that’s about 10 times larger than the black hole at the center of our own galaxy), and if it were to replace the Sun within our Solar System, its event horizon would swallow the orbits of both Mercury and Venus.

To my question: What set of special conditions that surround this particular supermassive black hole such that it is capable of creating this spectacular event?

Edit for clarity: By this I meant the jet and the hotspot.

This is a clear example of an astrophysical jet, in this case, most likely a relativistic jet. In short, an accretion disk forms around a black hole (supermassive or otherwise). Matter is pulled towards the black hole and further energized, before being accelerated into a jet emanating from the black hole's poles. Two different mechanisms have been proposed for the formation of jets:

The hotspot is, to me, much more interesting. It reminds me of structures seen around young stars: bipolar outflows (streams of gas that can form shock waves) and Herbig-Haro objects (the results of shock waves from relativistic jets. Obviously, the mechanisms are different, so no clear analogy can be drawn. But what is interesting about bipolar outflows and Herbig-Haro objects is that the shock waves produced therein result from collisions with the interstellar medium.

If a similar mechanism were to cause the shock waves by the hotspot, then we could conclude that the jets have hit the intergalactic medium. But I don't think this is necessarily the case, in part because of just how long these jets are prior to the formation of the hotspot. One would think that if the hotspot and shock waves are because of collisions with the intergalactic medium, the jets would be much shorter, because they would likely have reached higher density regions of it sooner. So that's why I find it interesting, and why I can't give you a good reason as to why the hotspot formed where it did, or the precise reason for it being there at all.

It's infalling matter, as described in the article:

The new image shows how the material being consumed by the black hole—stars, planets, interstellar gas, unwary astronauts (kidding)—releases a tremendous surplus of energy as it swirls around the event horizon in a massive accretion disk.

or in this article:

A huge amount of gravitational energy is released as material swirls towards the event horizon, the point of no return for infalling material. This energy produces an enormous beam, or jet, of particles traveling at nearly the speed of light into intergalactic space.

The infalling matter, mostly dust and gas, but also stars, is accelerated to nearly the speed of light. That's a giant amount of energy. Part of it is emitted as electromagnetic radiation.

The other factor is surrounding dust. If all this happens in a dense cloud of dust, you don't see it well from out outside.

Next: Are you sure, other supermassive black holes don't show similar features? Quasars near the edge of the visible universe are visible, since their respective jet points towards us.

Not the answer you're looking for? Browse other questions tagged supermassive-black-hole or ask your own question.

5
What is the galaxy M87 doing these days?
2
How many light years away is Earth from the closest outer edge of the black hole at the center of the Milky Way?
6
Is our central black hole actually at the CG of the galaxy?
12
What will happen to the shape of a galaxy when a super massive black hole lying in its center dies(evaporates out)?
8
What defines the plane of an accretion disk around a black hole?
3
What is the actual resolution of Event Horizon Telescope?
2
Could the largest SMBH swallow an entire galaxy?
2
What enhances the capture and merge rates of pairs of small black holes orbiting around supermassive black holes?
3
Why would the merger of spinning black holes within the accretion disk of a supermassive black hole cause them to "shoot straight up" out of the disk?
3
Is the angular size of the black hole in the movie "interstellar" completely overblown?