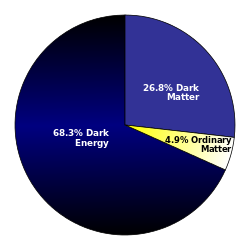 47
What is in the center of the universe?

9
Is the Universe really expanding at an increasing rate?
6
Is there an objective difference between space expansion and reduction in speed of light
3
Are there expanding-universe cosmological models that do not include inflation?
1
How strong is the gravitational stretch we experience from the edge of the universe?
1
At what speed does something have to travel away from us for it to red shift enough that it becomes invisible to the human eye?
9
Cosmological redshift vs doppler redshift
1
Cosmological redshift - How do we know it's not caused by the observer's time dilation?
4
Why do we see a cosmological redshift at all if space is not expanded in our solar system?
3
Doppler Redshift vs. Cosmological Redshift ... or Both?