Does LIGO have a blind spot?

If I understand the principle of operation of operation of LIGO, it detects relative distortions of the two perpendicular arms. So if both arms are distorted the same way, nothing would be spotted.

In particular, any wave coming in the direction 45 degrees between the arms (both ways), or from above or from below - or generally any direction in the symmetry plane 45 degrees to the arms - would be completely invisible, and anything close to it would be very muted as the relative distortion would be minimal.

This paper should tell you all you need to know about how LIGO observes and localizes gravitational waves, and in particular its blind spots. The map below is taken from the paper and shows the observability of the system when in the HLV configuration (Hanford-LIGO, Livingston-LIGO & Virgo). To triangulate a source by definition you need at least 3 measurements so that is why Virgo is included, although the two LIGO detectors can make very broad estimates for source localisation on their own (GW150914 was assigned a 600 square degree error box).

The (x) denotes a blind spot. 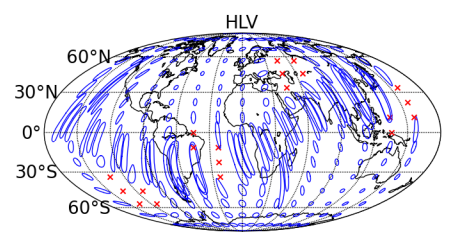 The blind spots are caused by the way the detectors work. They are sensitive to a gravitational wave (GW) changing the relative path length along interferometer arms at right angles to each other.

Gravitational waves come in two polarisations (plus and cross). These polarisations cause alternate perpendicular expansions and contractions in space, but are rotated by 45 degrees with respect to each other (plot from Kalmus 2009). 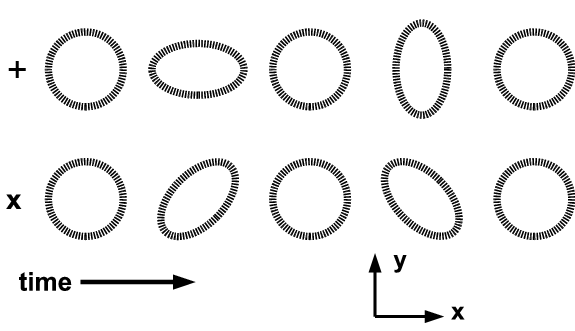 A GW source would normally be a mixture of both. The sensitivity to each polarisation depends on the orientation of the interferometer arms with respect to the source direction. For example, a source that is directly "overhead" will only be detected in the polarisation state that lines up with the arms and not in the other, because it would make the arm lengths change by the same amount. e.g. Imagine your detector is lined up with the x and y axis indicators in the picture above, then only the plus ($+$) polarised waves would be detected.

However, if the waves come from a source in the plane of the interferometer, then neither polarisation causes a relative difference in the arm lengths if the source lies along the bisector of the two arms or along an equivalent line at right angles to this. Thus there are 4 blind spots on the sky (see picture from Hayama & Nishizawa 2012, which shows the sensitivity as a function of position for the Hanford interferometer). Note that if a source is perfectly polarised (e.g. an edge-on merging binary system), then there will be additional blind spots. 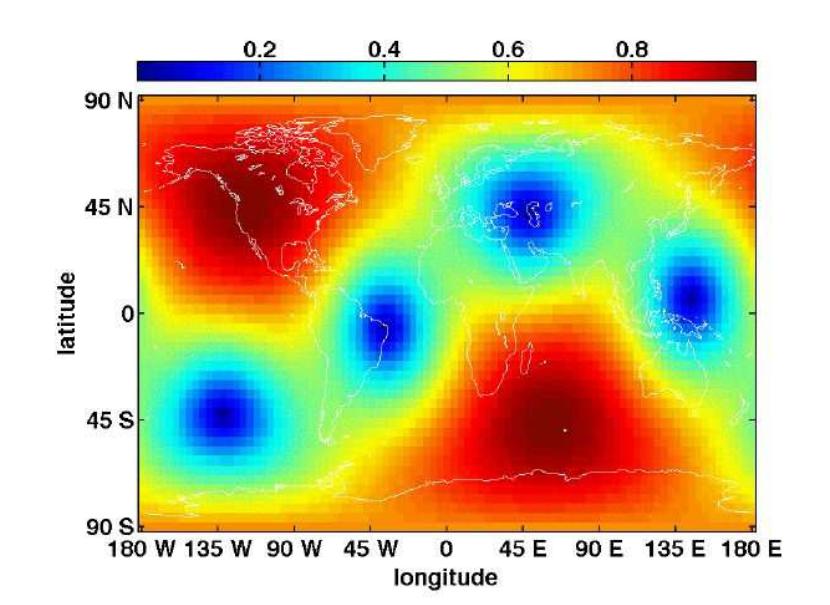 This discussion applies to each interferometer separately. The Washington and Louisiana instruments are clearly at different locations on the Earth's surface, so don't operate in exactly the same plane and so don't have identical blind spots (but they are close and the addition of VIRGO in Italy is hugely important). Nevertheless, if one detector doesn't see the source then that makes it very difficult to put any constraints on the position, since it relies heavily on measuring time differences between detections at the different instruments.

Not the answer you're looking for? Browse other questions tagged gravitational-waves ligo .