Can't black holes just be super dense objects? They could still be black (having the color of black never really required special physics, after all) and have a really strong gravitational field. If we suspect that it actually absorbs light due to its gravity then it is possible that there is gravity strong enough to capture light, not letting any radiate out when matter falls into this object.

This answer is to some degree opinion-based. I share your scepticism about the existence of strict mathematical singularities as General Relativity would predict. This is mainly, because the assumption of a strict singuarity ignores quantum theory. One approach to overcome the singularity is a Gravastar. Related is a Planck star. Both approaches try to overcome the paradoxes near the singuarity. A full answer might eventually be provided by a still to be defined quantum gravity.

Another difficulty for "real" black holes is rotation. The Schwarzschild solution is not to be expected to occur in real-world black holes.

Instead a Kerr solution (or might be a Kerr-Newman metric) will get closer to real astronomical objects, hence including at least rotation, and might be some residual electric charge.

A massless particle travelling with the speed of light results in an undefined energy according to Special Relativity. Nature opens a physics dedicated to massless particles by allowing them to take any energy to resolve this undefined range. In a similar way nature may open a new kind of physics inside black holes to resolve the paradox between General Relativity and quantum theory.

What is a singularity?

A singularity is often created in a supernova explosion. A supernova is where a star is caused when there is so much matter in the centre of a star (at the end of its life) that the star cannot support its own gravitational force, and it collapses in on itself and explodes.

The second way a supernova can happen is in a binary star system - where if there is a white dwarf, it steals matter from the other star and eventually it accumulates so much matter that it explodes.

A singularity is caused by the big stars, not small ones. Small stars that explode in a supernova create something called neutron stars.

So what is a black hole?

A black hole is a area in space with a gravitational field so strong not even light can escape. Black holes don't have the colour black, they don't have a colour because we can't see any light coming back from them. So no, light is not absorbed. Black holes can also eventually dissipate, due to a mechanism called Hawking Radiation

There are multiple types of black holes including:

Finally, there are 3 main areas inside a black hole. 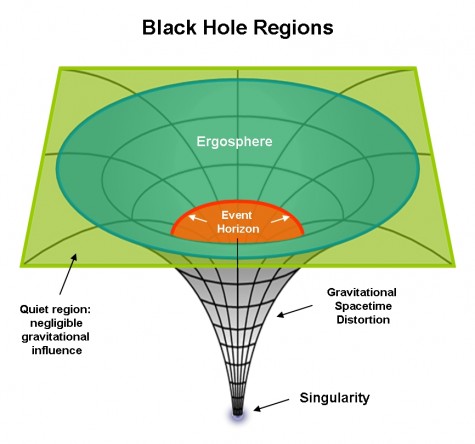 This diagram can show us many things, for example, how black holes don't have a gravitational pull which goes across the whole universe.

Sorry for providing a awkwardly long answer, I was having trouble understanding what you didn't understand, and I thought that if I explained a singularity - then I'd surely help you, sorry if I've just said things you already know. I've provided some Wikipedia links if you want to have a look at some of the terms I left in italics. You might also want to look at black hole thermodynamics

I think you are starting off from the premise that there is some way of stabilising an extremely dense object inside the event horizon of a black hole. In the classical theory of General Relativity the singularity is inevitable. Once inside an event horizon an object is compelled to move towards, and reach, the singularity in a finite time, in the same way that you are compelled to move forward in time whether you like it or not.

Therefore it is impossible to have something in classical GR that looks like a black hole and has an event horizon, but which does not form some sort of singularity. However, we know that classical GR must break down on extremely small (quantum) scales so it is entirely possible that something happens to prevent singularities in a quantum theory of gravity.

So one is perfectly free to invent a version of General Relativity that allows for some sort of avoidance of a singularity. But there are (at least) two requirements. (1) It should explain all the other things that classical GR explains perfectly well. (2) It should have observable consequences outside the event horizon, because otherwise it's pointless navel gazing (IMO).

NB: Wormholes and such-like may be possible in (classical GR) rotating black holes, but my limited understanding is that these form despite the singularity (which is no longer a point). In other words, the singularity is still there, but matter does not inevitably end up in it (but goes somewhere else!)

The stuff you've written about infinite mass, infinite force etc. is just wrong. The mass of a black hole is well-defined as are its gravitational effects. A finite mass still arises from taking the integral of an infinite density over zero volume.

It is common to describe a singularity as a point of infinite density, but really they are more general than that: they are some sort of pathological behaviour in the spacetime metric. Whether singularities are actual physical phenomena or they just demonstrate the point at which a theory (in this case general relativity) can no longer describe nature is a matter of debate.

Penrose's singularity theorem demonstrates that under a certain set of very reasonable assumptions that the gravitational collapse of an object like a star inevitably leads to a singularity. Note though the proof is of geodesic incompleteness (i.e. the time-lines of some free-falling object end abruptly). This is not (necessarily) the same as the apparent 'infinite density' curvature singularities that occur in idealized black hole solutions like the Schwarzschild metric.

There's many good answers to this on a physical level, but I don't see this one addressed, so I'll give an answer briefly.

If black holes have infinities, which is only possible if they have a singularity, then those infinities are, by definition, infinity small and not infinite from any distance away, even a fraction of an atom's distance away. So "destroy the universe by infinite forces", sure, if the universe was smaller than an atom, or maybe, inside the event horizon where it couldn't do anything but fall towards the singularity, but at any safe and reasonable distance, black holes aren't dangerous and not a threat to the universe.

Gravastars to the rescue! Just what I needed. Finally, some theorists who are not comfortable with infinitely nasty objects populating our universe!

OK for starters, the laws of physics are what they are, and they don't care what we think. As to things being "nasty", that's in the eye of the beholder.

That's the problem with point of view. It's not a complete picture. Black holes make a great "boogie man", as something that eats everything and cannot be escaped, but that's only part of the big picture.

Einstein himself found black holes a distasteful idea (He wasn't too keen on quantum mechanics either), so Einstein imagined the Universe had some physical law that prevented black holes from ever forming and that might even be the case, but honestly, how different is it to be slowly squashed around the event horizon over an eternity vs quickly squashed in the singularity or whatever goes on in the center. From a certain point of view, it's pretty much the same thing.

On black holes in general:

They're very useful. The formation of black holes, and the gravitational collapse and rebound off the collapse, creates and distributes heavy elements across the galaxy and in the collapse that creates a black hole or Neutron star, something like 90% of the matter of the star gets blown off, recycled, if you will, back into the galaxy and only 10% or so, forms the collapsed core.

You can think of the black hole as a nasty little remnant of a star's death, but I find the fact that large stars recycle and distribute so much of their matter across the galaxy to be highly cool. Supermassive black holes also help in the formation of galaxies, so the simple truth is, black holes are very useful, even if you wouldn't want to cross paths with one.

Now on what happens inside a black hole, there's some good answers to that already and I don't want to make this too long, especially since I'm a layman, but I find the speculation of that exotic region inside the event horizon to be great fun to think about.

I personally don't believe in singularities. I (THINK), that the wave and field nature of quantum mechanics and the fact that empty space has properties which, for example, particle anti particle pairs can form essentially out of nothing, (which make hawking radiation possible), I think there's probably some kind of exotic space of never a full singularity.

I don't think there's what might be called a physical material inside a black hole. I think things would behave differently than that, more like the exotic nature of a proton or electron than the physical nature of a surface, but that's just my thoughts on the subject. Without a quantum theory of gravity, it's a bit like the blind looking at a map though. Nobody knows. (too long?)

I believe that black holes are singularities in the sense that matter in it, is not-defined to have any meaningful location or known velocities. I don't think it means singularity in the sense of having zero radius.

Not the answer you're looking for? Browse other questions tagged gravity black-hole singularity or ask your own question.

0
Does our current understanding of the mass of black hole only allow for it to be located at the singularity?

2
Do black hole singularities actually merge?
9
Black hole without singularity?
0
Do black holes really exist?
2
Singularities/ringularities and their properties
31
Are black holes spherical during merger?
6
What is the closest one could get to a black hole and still stand a realistic chance of escape?
2
Do gravitationally bound (e.g. orbiting) objects really resist the expansion of space?