Where is the flaw in this hypothetical concept of escaping event horizon using another's blackhole flyby? 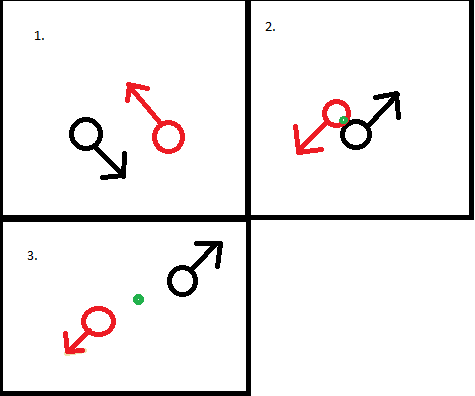 In short, it doesn't work.

In the exact situation you draw, it is likely that the release of graviational radiation would lead to a merger rather than a pass but you would need to run the simulation to confirm this.

The black holes will either merge or they won't. If they merge, they just become a bigger black hole, and we're back to square one.

There is no similarity there.

Most people are fixated on a phrase, often repeated in popular science, that "not even light can escape from a black hole", which leads people to believe that if you could somehow go faster than light, or if the bond with the black hole was a bit less strong, you could escape.

Well, you can't. That bond is not a finite amount. It's effectively infinite (emphasis on "effectively", because there's a trick here). Let me explain what I mean.

Pick any point inside the event horizon. Draw a straight line from there in any direction. Keep drawing. Eventually the line will end at the center of the black hole.

Back to the initial point and pick a completely different direction. Draw the straight line. Damn, hit the center again.

Start over, but now scribble some randomly-shaped, winding line. Holy cow, I hit the center again!

That's how it is. Spacetime inside the event horizon is closed into itself, will all possible trajectories ending at the center of the black hole. There is no possible escape route. No matter what, you will end up in the center.

Bringing in another black hole makes no difference, because the two black holes will merge, first their event horizons, then they will complete the merger. At any stage in this process, the same rule applies to their common event horizon: there is no path from inside that can break through to the outer universe.