How often do meteorites hit the Earth?

I heard of one that occurred in 2008 in the Nubian Desert in Sudan, how often does it happen? Is there a catalogue of all hits or are they very rare?

Related link (This is what inspired my interest not defining what I'm looking for) https://en.wikipedia.org/wiki/2008_TC3

At the time of asking I had not thought about the distinction between hitting the atmosphere and hitting the Earth.

Meteorites come in all sizes, from sand grains to dinosaur-annihilating rocks. The size distribution of these rocks (as well as most other things in space) follow an approximate power law, meaning that the smaller the meteorites you consider, the more often they hit Earth.

Estimating the total number of meteorites hitting Earth is difficult, but one study (Bland et al. 1996), looking at the composite of the earth on three arid site and considering the weathering over time, finds that between 36 and 116 meteorites over 10 g hit Earth every year per $10^6\,\mathrm{km}^2$. Multiplying by the surface area of Earth $A_\oplus$, that's roughly 20,000 to 60,000 meteorites hitting Earth per year.

UPDATE: You want to know the rate of incoming meteors, i.e. all rocks that hit Earth's atmosphere. By definition, a meteorite is a meteor that lands on the surface of Earth. Before it enters the atmosphere and becomes a meteor, you can call it asteroid, meteoroid, rock, pebble, or dust grain, depending on its size and your mood.

The meteors discussed above is probably not what you had in mind. As mentioned, the bulk of these "rocks" are actually more like sand grains. So what is the rate of devastating killer-rocks from space? Brown et al. (2002) fit a power law to several different data sets (LINEAR, Spacewatch, NEAT and others), and find that the number $N$ of meteors above a diameter $D$ in meters is roughly $$ N(>D) \simeq 37 D^{-2.7}. $$ The following plot is from their paper, with the long black line showing their fit, and the short black lines indicating the uncertainty: 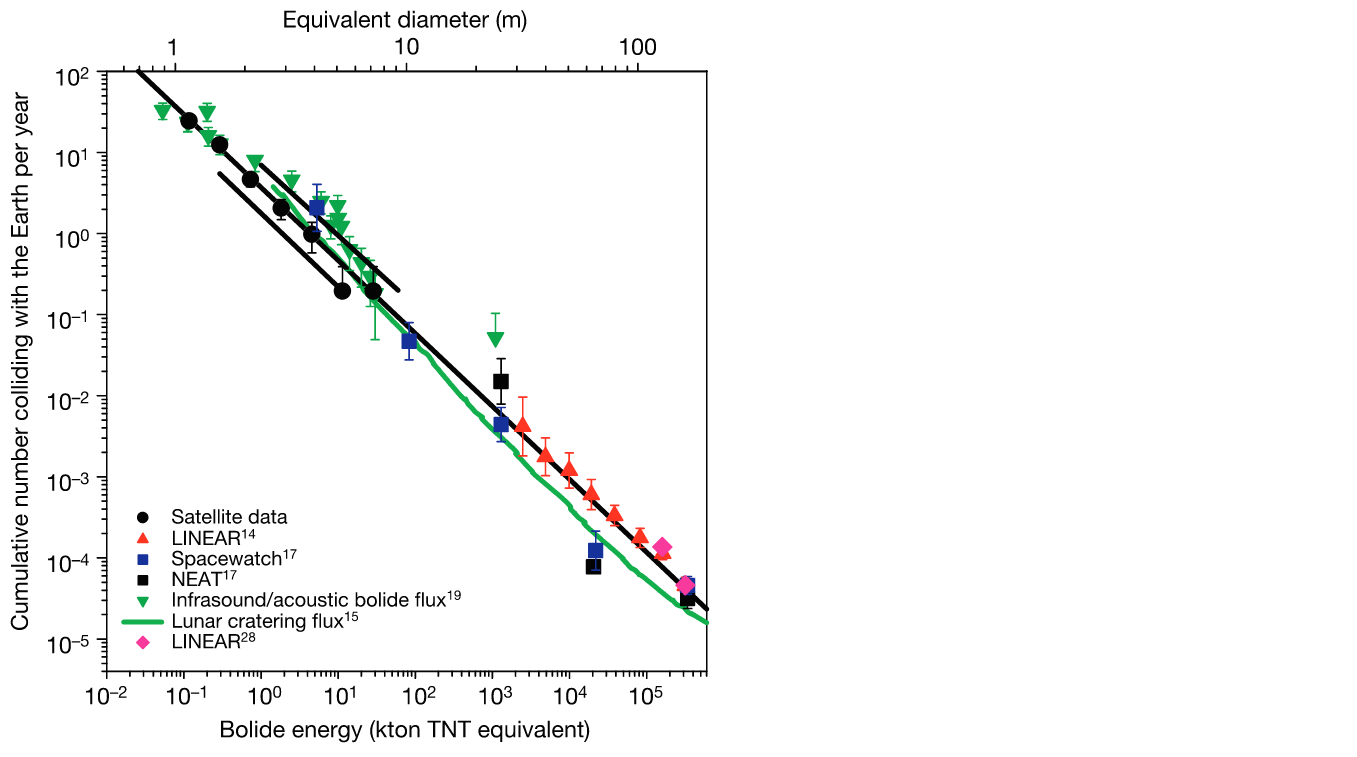 Not the answer you're looking for? Browse other questions tagged asteroids impact or ask your own question.

1
Meteor size and frequency distribution for Earth vs. moon or other planets?

7
How can we tell if the asteroid 2013 TV135 will hit Earth in 2032?
3
Can Mercury hit Earth or Mars in the next 5 billion years?
5
How gently could a comet/asteroid/meteorite "hit" Earth?
1
How can they tell no asteriods will hit earth in the next hundreds years?
1
Are meteorites found everywhere?
0
Would a direct hit by a small comet be catastrophic?
5
Where do asteroids impact upon the Earth most often?
2
Origins of meteorites?
4
What if a global killer hit Mars?
4
What would a 220km diameter asteroid impact do to Earth?