Will new stars stop forming at some point of time?

New stars keep forming in the universe thanks to all the nebulae. Now, we need Hydrogen to form stars and there would a time when all the hydrogen will get exhausted, and no more star formation will take place, theoretically.

Will there practically be such a point of time? I guess there is no place where hydrogen is replenished after star formation. Or is there a feedback cycle?

Cosmic GDP has already crashed, as Peak Star was ~11 billion years ago. 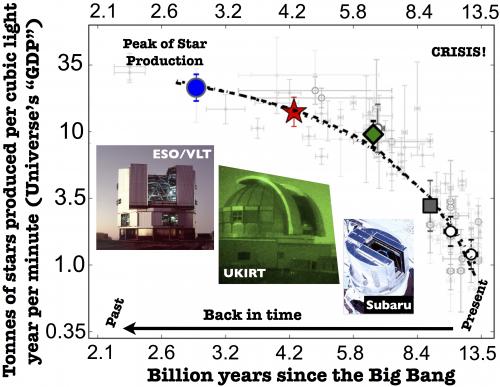 According to Sobral et al's prediction, the future star production by mass will give only 5% of the stars in the universe today, "even if we wait forever." More theoretical predictions, such as this one, suggest that nebulae will run out of hydrogen on the order of $10^{13}$ years, while star formation will occasionally happen due to collision of brown dwarfs until somewhere on the order of $10^{14}$ years.

Of course, hydrogen itself may have a finite lifetime. The half-life of a proton is experimentally known to be longer than $10^{34}$ years, but it may still be quite finite.

Given what we know of entropy and of the expansion of the Universe, the answer to your question is of course "Yes".

It will take a really really long time, however.

Not the answer you're looking for? Browse other questions tagged star nebula star-formation or ask your own question.

1
Star Formation in the future
5
How many generations of stars can be formed in the Stelliferous Era?
3
Could dark matter particles be unstable?
3
Is it be correct to say that we live in a young (only 14 billion years old) universe?
1
Doubt about star formation

7
Mechanism for Brown Dwarf Fusion
2
Is there matter forming in the inflationary space?
8
Which came first: Galaxies <=> Stars <=> Planets?
0
Is the galaxy made of a nebula or the solar system?
2
Will all of the gas in the universe be converted into red dwarf stars?
6
The formation of new stars as depicted in Feynman's lectures
12
What will future populations of stars be like?
5
How many generations of stars can be formed in the Stelliferous Era?
41
Are new stars less pure as generations go by?