How does gravity really work

I am only 12 years old and I'm constantly wondering and trying understand how gravity really works. On YouTube everyone always talks about objects warping space time around themselves and uses the analogy of a trampoline. I still don't understand gravity because if space were like a trampoline, then earth would be spiraling in towards the sun along with all the other planets, right? So could someone explain to me how gravity really works without the trampoline analogy?

First of all: "How gravity really works" is a deep question, and any serious scientist would quickly concede that all we have is an incomplete working model. You certainly have heard about General Relativity; the first image on the page is your trampoline.

Our working model, General Relativity, is working because it explains a lot of observations very nicely. (Careful, here is another deep question lingering: "Explains" means that we can predict some observations from other observations with the model of gravity we have in our mind. It does not necessarily mean that we understand the "real nature" of the underlying issues.) But we are very confident that the model is working over a wide range of observations. One of the last "first-time" observations which followed the predictions and thus gave us more confidence in the model was the two black holes colliding lately. Lately? Well, billions of years ago. We just learned about it lately. Here is a link to a New York Times article with an impressive video. (I think one can still read a limited number of Times articles for free, so try it out.)

Our model of gravity is incomplete because it doesn't connect well to the model of nature we have for other things (elementary particles, quantum physics). For a while (like 70 years or so) it didn't connect at all; Einstein himself completely failed to connect the dots, which was probably not encouraging since he had received the Nobel Price for laying one of the foundations of quantum physics and was the obvious authority about gravity. If he couldn't do it, who could?

If I'm not mistaken, the physicists today are making progress, slowly. This connection between quantum physics and gravity is one of the main unresolved problems in modern physics.

Last, let me address your concern about the planets spiraling into the sun. This idea probably comes from actual balls on an actual trampoline spiraling in, I suppose. You probably know that the balls lose speed due to friction, much the same way you slow down on your bike when you stop pedaling. Some of the kinetic energy is transformed into heat.

And you know what? You are right. Given enough time, the planets would eventually fall into the sun. Low-flying satellites fall back to earth after a few years, because there are still traces of atmosphere slowing them down out there. The reason is that there is "friction" in the wider sense involved in all large-scale processes in the universe. That is actually one of the fundamental physical principles making up the world we know. It's just that the near-vacuum between the planets doesn't provide that much friction, and the planets are fairly massive bodies with an enormous mass and kinetic energy. It will take a long long time for them to lose enough energy that they'll be so close as to touch the sun. (Perhaps too long to happen at all.) In fact, over human life times the planets, moons and stuff are almost perfect examples for movement without friction. But in the astronomical time scale -- billions of years --, there certainly is friction. For example, the moon is showing us always the same side because friction slowed its rotation so that the rotation is now "locked" with its orbit.

Bottom line: The idea that gravity bends space and time "explains" all large-scale observations so far; the "trampoline" is a good model for a 2-dimensional "space", i.e. a surface, if you ignore friction.

Why are objects not escaping?

Consider first an object with velocity, and no gravity in action: 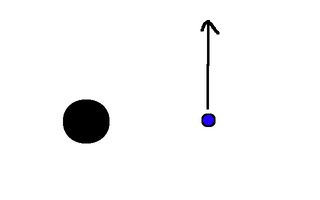 Then, that blue object will become more and more distant, if it continues in the same direction.

But it does not continue in the same direction, after a while, the gravity of the big black object has changed its course: 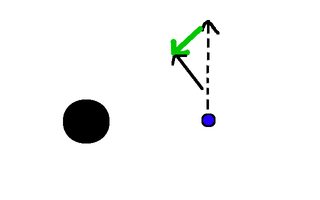 That happens again, and again and again: 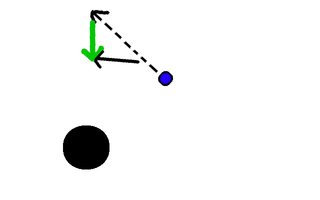 Your question is: Why does not the object spiral in? You are perhaps thinking that as it comes closer, the gravity becomes stronger, and therefore the object is forced to come even closer.

But when it falls closer, its velocity increases. As we have seen, the velocity of the objects tries to make it escape. So when it is closer, it has more velocity to counteract the increased gravity.

Edit: Just in case of a more literal interpretation of your question, the trampoline in the original analogy causes friction, and therefore spiralling, but space is a vacuum.

The trampoline analogy is useful if you understand gravity within a General Relativity framework. The conceptual problem there is that actually the space-time is wrapped in 4, not in 3 dimensions, i.e. including time.

In fact, when the Earth rotates around the Sun, it loses a very tiny amount of energy in form of gravitational waves. So, the Earth is actually spiraling towards the Sun. The thing is that this gravitational wave emission is so small, that by the time we observe any considerable spiraling, the Earth and the Sun would have already ceased to exist. Much before that, the Solar System becomes unstable due to chaotic effects already contained in classical Newtonian mechanics.

Have you heard of Newton's First Law? It says that an object in motion continues moving at the same speed and in the same direction unless acted upon by a force.

When we roll a ball along the ground, it will eventually stop. Before Newton, many people believed that everything slows down by itself. Newton's insight was that this is not true, and actually the only reason a rolling ball will slow down is because the ground and the air rub or push against the ball to slow it down.

On a trampoline, a ball will rub against the trampoline material and against the air, which slows it down. This is the only reason that the ball ends up spiralling towards the centre.

If you find this hard to believe, you can write a computer program to do all the calculations and see what happens! I have made an example simulation for you. You will see that without friction, the planet will end up where it started each time it goes around the sun. If you change the planet's initial yspeed from 20 to 40 and then click "Run" up the top you will see a more circular orbit. You can change other things and see what happens. I hope you find this useful!

Neutrino String Induction-Refraction is the cause of gravity. Some will say that neutrinos are insignificant, but Dirac, Hawking, and Tyson think otherwise and most discount the effect of a charged particle traveling at the speed of light. Keep in mind that no one can, or has proved that mass is a property of matter, more of an effect.

Go to www.themechanismofreality.com , this site explains exactly how gravity works. Every Physicist who examines this agrees that this is correct. From CERN to the University of Beijing's Physic Department agree that this is a 'Fantastic connection between graviton physics and string theory"! This was also confirmed , indirectly, by LIGO and the gravity wave announcement. Enjoy!

-7
Could gravity be the 4th dimension?