Why does the eclipse in this video look annular?

In this article about the AS870 flight that flew through the umbra of the March 8-9 2016 solar eclipse, there is a link to a YouTube video showing the eclipse recored by a handheld camera in the cabin.

Of course this is personal video and not recorded for analysis, but the images - especially during the zoomed part - remind me of an annular eclipse, rather than a total eclipse. Below are some screenshots - the weak Fresnel reflections in the cabin window act a bit like attenuators (ND filters) and give less saturated, though distorted views. Basically they all look like donuts.

My first thinking was that if it was a total eclipse on the ground, it couldn't be annular at 35,000 feet closer to the moon. But thinking and looking again, the sun is near the horizon, and the plane at about 150 West longitude is not necessarily closer to the sun than observers on the ground were in Indonesia circa 120 East.

My question is - is that just corona, or is the plane farther away enough from the moon at this time and location to make the eclipse annular?

It may be helpful to read about hybrid eclipses.

note: I'm looking for a quantitative answer, not an opinion.

There is another version of the video on YouTube with more views, but the narrative doesn't hold a candle to double rainbow guy original and musical version. 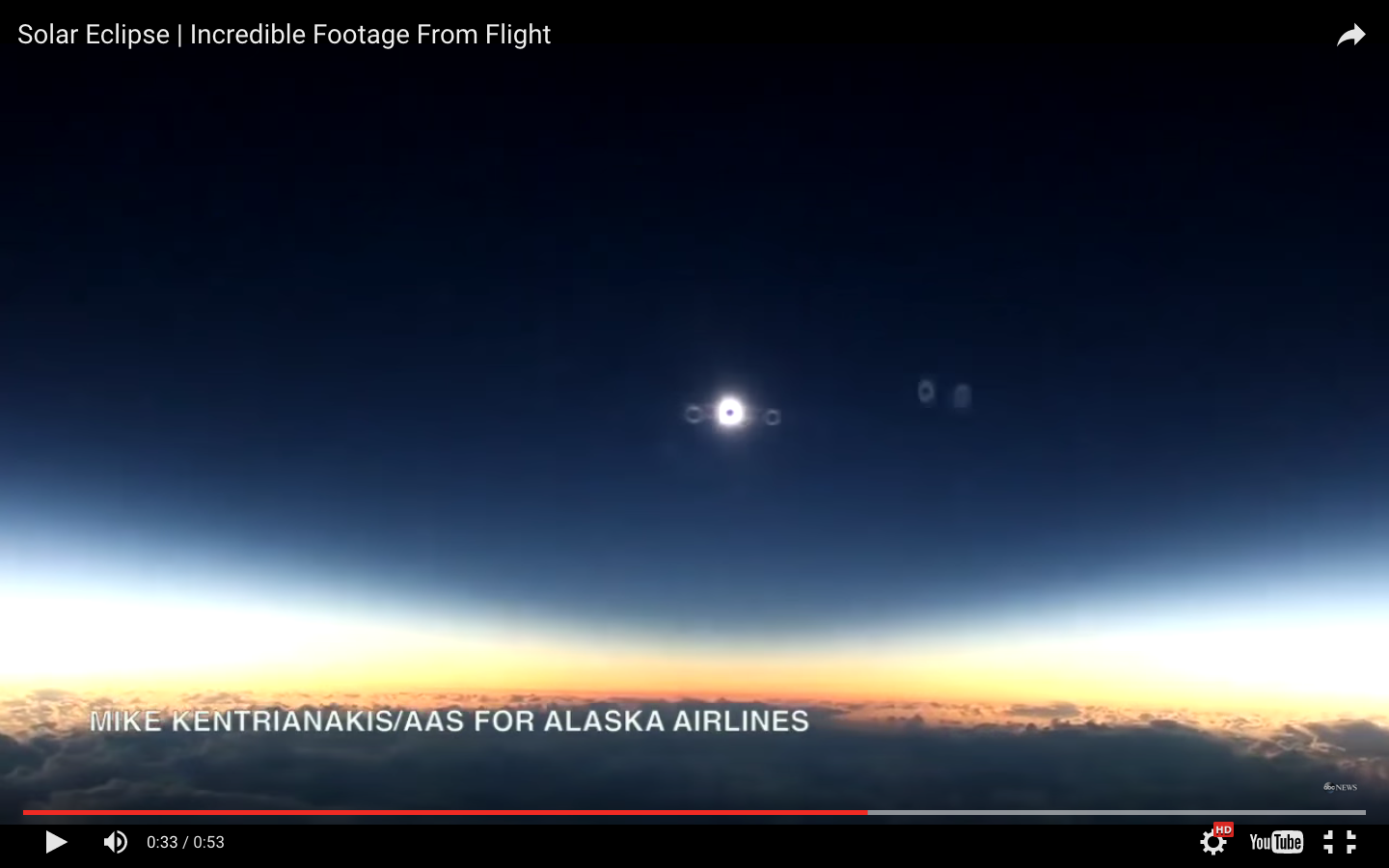 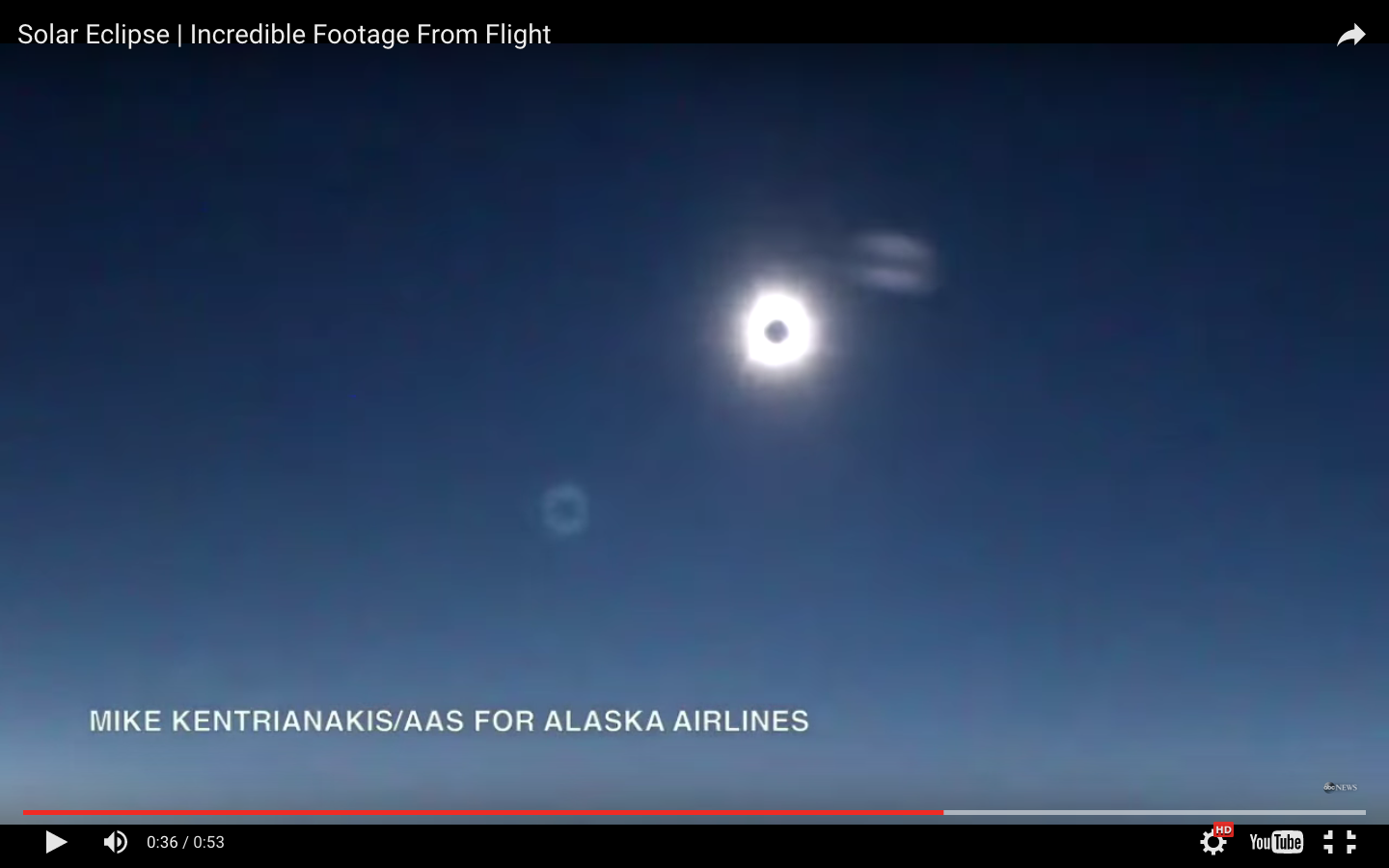 Here is a screenshot of a typical AS870 flight from flightradar24.com, pretty much between 152 and 158 degrees west. 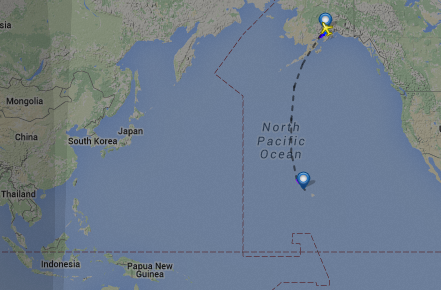 This is from the second link in the top line - the Alaska Airlines blog entry for the flight. 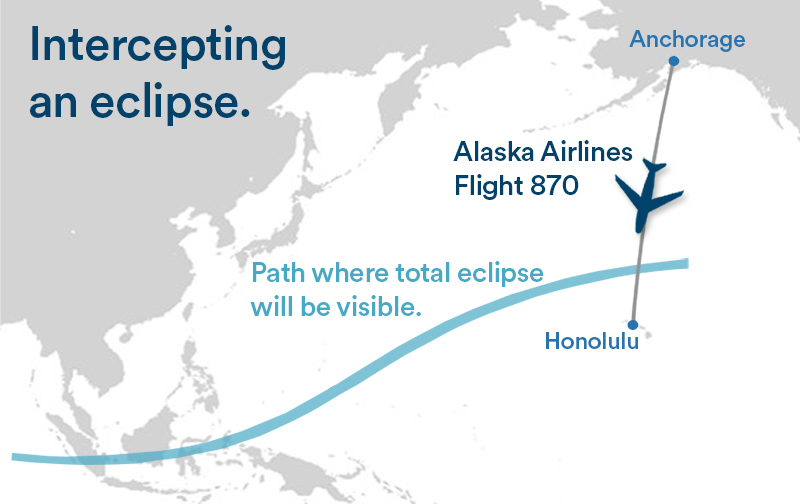 How an eclipse could possibly appear annular from a plane over one place on the planet while appearing total on the ground at another place on the planet 5,000 kilometers away (note, these occur at different times - the shadow is moving relative to earth and the earth is rotating):

It is quite clear from the film (and the awful soundtrack) that a total eclipse was observed. The Sun's corona and prominences cannot be seen during an annular eclipse. Nor is there a sudden fading or drastic brightening at the beginning and end of an annular eclipse.

The accompanying article talks about "totality" and removing safety glasses to look at the Sun during totality, and that the period of totality was 1 min 53 seconds; the (frankly, annoying) narrator shouts the word "totality" about 23 times.

The eclipse was observed towards the end period of totality (what I mean by that is the shadow is tracking west to east across the Earth's surface. That means the Sun was above the western horizon as seen by the plane, and at 5:35pm, would be 10 degrees above the horizon. That means that in order to observe this event the plane must have been closer to the moon than a point on the surface of the Earth where totality would have been observed at the same time. That means the period of totality would have been slightly longer and the moon would have had a slightly larger angular size as seen from the plane.

If I had the exact latitude and longitude I could tell you just how much longer the eclipse was. Messing about with Stellarium, I can get a reasonable match of the eclipse time at W157 58 35, N31 22 00. At 10,000m the eclipse is total and lasts about 70s. At sealevel at the same latitude it lasts maybe a few seconds longer (it's difficult to be sure). But the sea level region of totality observed at the same time would have been somewhat further east (but still along the path where totality was observed), where the period of totality would have been shorter.

1
Why isn't the moon dark in a solar eclipse?
3
Why solar eclipse paths are symmetrical?
5
Why shouldn't you look at the Sun through a camera using eclipse glasses?
7
What does a solar eclipse at 99% totality look like?
1
Why does the path of the moon in an eclipse curve (relative to the sun)
0
How much does cloud cover affect viewing the total eclipse
1
How to tell between annular and total eclipse (directly)?
8
When did the first annular eclipse happen?