What explains the distribution of new impact craters on Mars?

24 minutes into this van Karman lecture by Dr. Tamppari, the slide below is shown with symbols for transient events on Mars. Red dots represent meteoroid impacts which have occurred while MRO has been in Mars' orbit.

New impacts are almost only found at lower latitudes. And longitudinally there are two equally sized gaps at the equator. Is this because of some observational bias or is there a natural explanation? 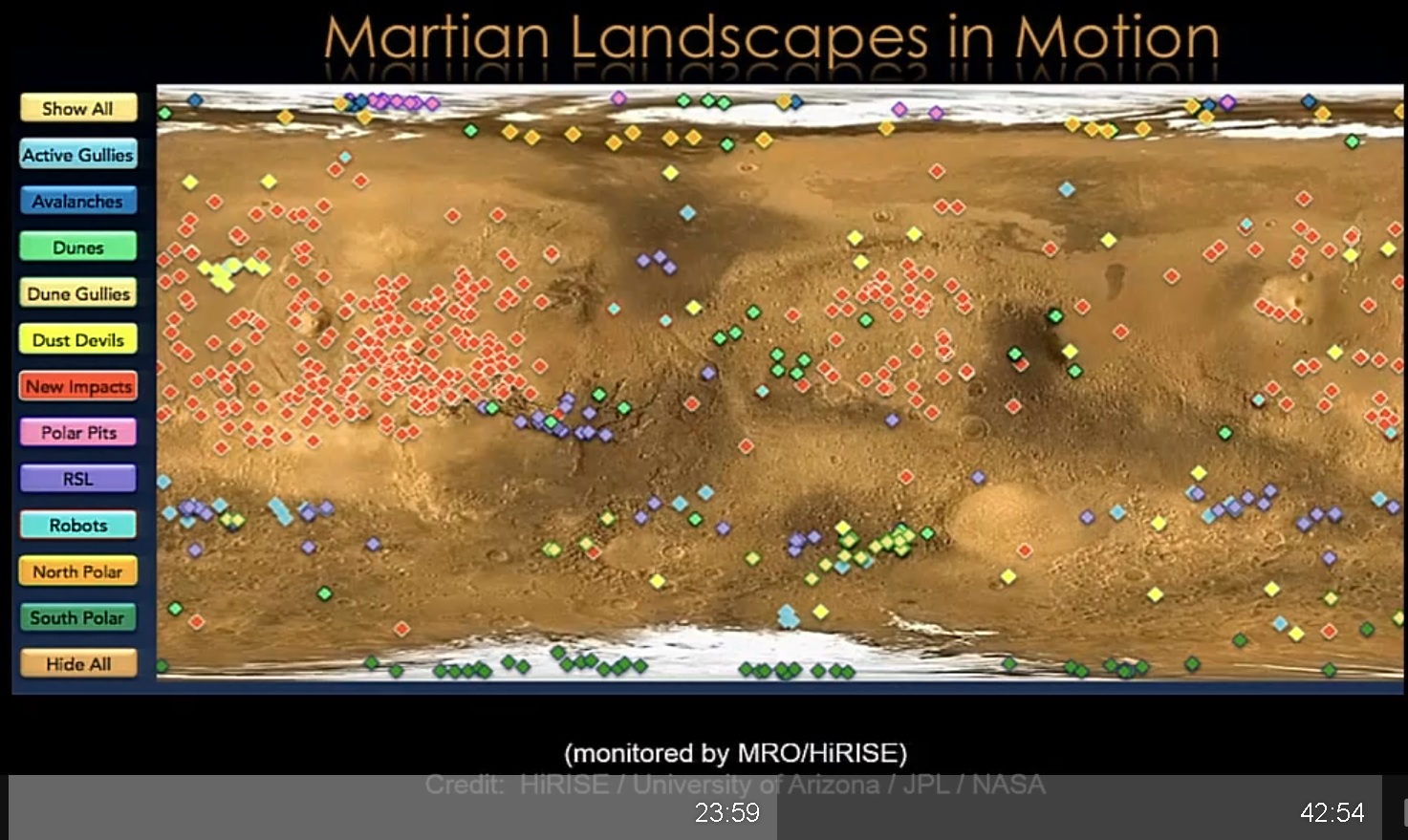 I was on the targeting team for one of the cameras that discovered most of these new impact craters. The reason for the distribution is simply because it's easiest to find "new" impact craters in the dusty regions of Mars. Often what we see is the dark-toned blast zone created by the impact in lower-resolution data, which has a large areal footprint. Then, we target those dark-toned splotches with the higher resolution cameras---which have MUCH smaller footprints---to confirm whether or not the splotches are craters. See the attached image as an example. The dark splotches really stand out in dusty regions, but in the non-dusty areas there's nothing obvious to pick out to say "hey, there's a new crater" as a human without tediously comparing images. 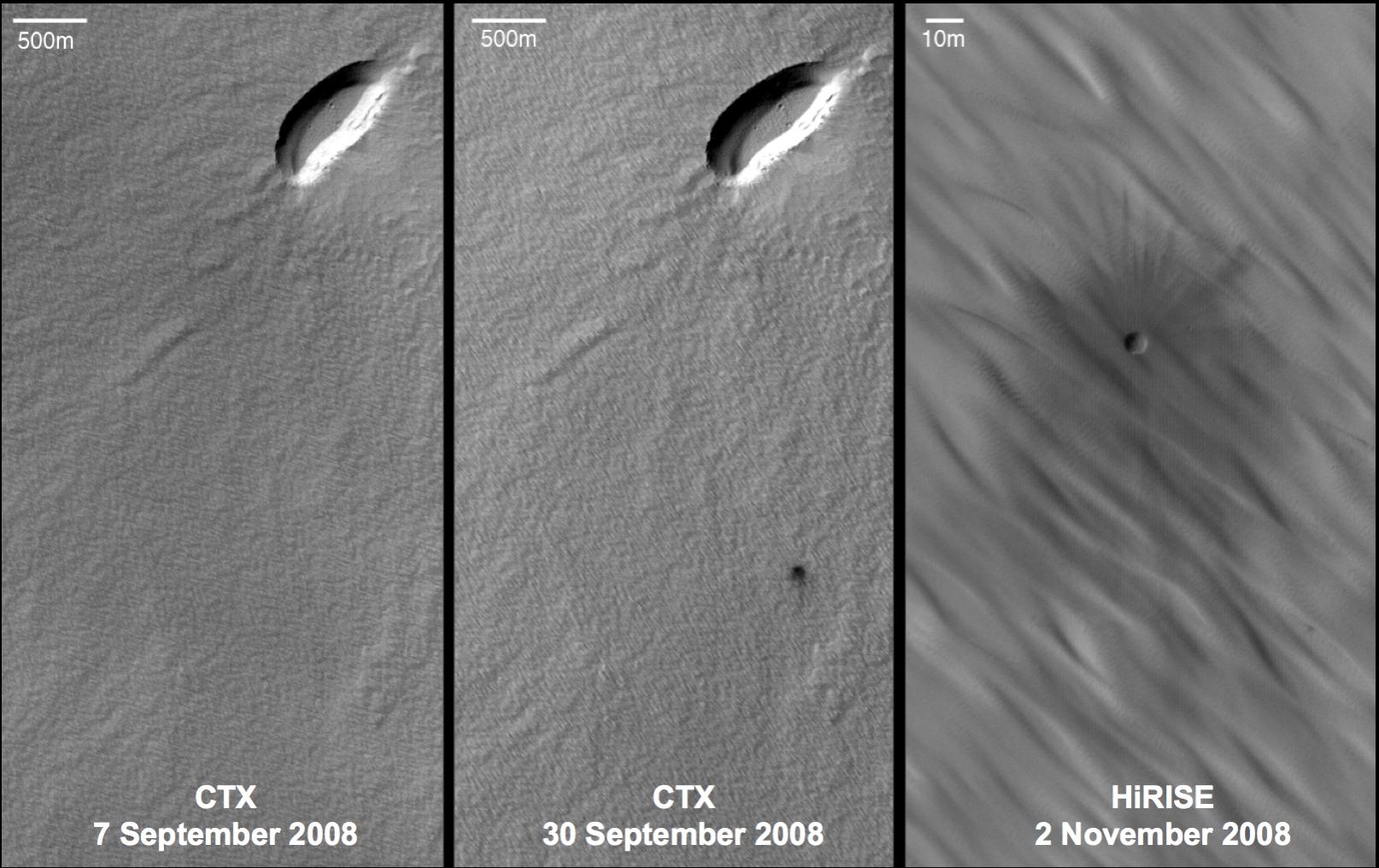 The simplest explanation for the latitudinal distribution would be that most small solar system bodies that could impact one of the planets happen to orbit near the ecliptic plane and Mars' orbital inclination is only ~$1.85^{\circ}$.

The longitudinal "clumpiness" may be due to erosion rate differences, since the new impacts almost exclusively appear in the lighter shaded regions.

Update/Edits
@LocalFluff brought up an excellent point that made me re-examine my original thoughts on this matter.

After some digging, it turns out that (not surprisingly) there has been a lot of work on impact craters on just Mars alone. As for the distribution, there was a relatively recent study by Robbins and Hynek, [2012] (doi:10.1029/2011JE003966)

They found that an interesting ratio of the depth-to-diameter of the impact craters. This ratio peaks near low latitudes (i.e., within roughly $\pm30^{\circ}$ of the Martian equator) and generally decreases towards higher latitudes. They argue that the likely cause of the larger diameter craters near the poles results from a shallower cryosphere. They also find that the craters at high latitudes are more likely to be complex, which ...are large and have a variety of interior morphologies such as wall terraces, central peaks, and flat floors... Part of the reason for the different crater types, they argue, may be related to the substance in which the impactor hits, i.e., shallower ice at high latitudes.

So I still think that my original answer is partially correct in that most high-latitude impacts would be more of a glancing blow than impact and submersion into the target, which partly explains the larger diameter in some cases. Further, as Robbins and Hynek, [2012] show, the distribution of ~1-3 km diameter craters are clearly peaked within $\pm30^{\circ}$ of the Martian equator.

Below I have listed several relevant studies that I could find with a quick search.

Not the answer you're looking for? Browse other questions tagged mars impact crater or ask your own question.

4
Would a Phobos full impact make Mars temporary habitable?
9
What was the orbital path of earth before collision with a Mars sized planet?
4
What are these dark spots on Mars' north pole?
5
Where do asteroids impact upon the Earth most often?
19
Whats the probability of a hazardous impact for human life on Mars?
3
What are the craters on the moon with peaks in the middle of them?
16
How would the Tycho Impact have appeared from Earth?
19
Apparent Ring of Craters on the Moon
37
How do we distinguish old craters from new ones on the Moon?