Explanation for the first spinning neutron star detected in the Andromeda galaxy?

A new class of Neutron stars has been found in the Andromeda galaxy (M31), This is the first time a Spinning Neutron star has ever been detected by astronomers in M31. The article states-

“It could be what we call a ‘peculiar low-mass X-ray binary pulsar’ — in which the companion star is less massive than our Sun — or alternatively an intermediate-mass binary system with a companion of about two solar masses,” said Paolo Esposito of INAF-Istituto di Astrofisica Spaziale e Fisica Cosmica, Milan, Italy.

While the precise nature of the system remains unclear, the data imply that it is unusual and exotic. http://www.astronomy.com/news/2016/04/andromedas-first-spinning-neutron-star-has-been-found

Question- Could the companion of this Spinning Neutron Star not be a star at all but a Black Hole? This might explain the unusual spin and that all neutron stars do not consume other binary companions stars but rather a Black Hole is in the process of consuming the neutron stars.

The Black Hole can devour all of the outer energy of any active star leaving only the dense core of heavy metals that will eventually cool off entirely creating the rouge brown dwarf. Supernovae never derived from dying neutron stars but rather from Binary star Collisions. 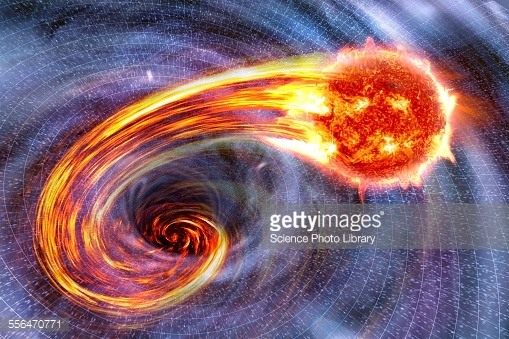 In the article it notes that the partner has less mass than the sun, or possibly up to about twice the mass of the sun (quite a range of uncertainty there!) It's not clear, from the article how they made these calculations, measurement of doppler shifts to get orbital velocity I suppose.

The mass suggested there is not especially small, there are pulsar binary systems in which the secondary is one hundredth the mass of the sun, and could be considered to be planets.

However it does rule out a black hole companion, which would have a mass of 3 solar masses at the least, (and more likely more than 5). There is no need to hypothesis a black hole to explain the spin.

The last few sentences in your question don't make any sense to me.

Not the answer you're looking for? Browse other questions tagged black-hole space neutron-star or ask your own question.

6
How can we know the nature of the companion in a neutron star binary?
5
Why do we think that there is no two-solar-mass black hole?
4
How can a supernova affect black hole in a binary system?
6
Binaries consisting of a black hole and a non-black hole?
8
Roche Zone of a black hole vs Roche Zone of Neutron Star
2
Binary pairings that haven't been discovered yet?
6
Could the unseen companion of HR 6819 be a close binary system?
1
Fraction of initial mass lost (radiated) by neutron star mergers compared to black hole mergers?