If a white dwarf collides with a giant star, could it create a TZO?

Thorneâ€“Ĺ»ytkow objects (TZOs) form from collisions between neutron stars and main sequence or giant stars. Ultimately, the neutron star becomes the "core" of the giant star.

Thorne and Ĺ»ytkow's original paper on TĹ»Os actually opens with a comparison of TĹ»Os and the type of object you mention, with a white dwarf degenerate core instead of a neutron star degenerate core. They note that the equilibrium states - essentially, stable configurations - of such combinations lie near the Hayashi track (actually acting a bit like AGB stars, in some cases), indicating high metallicity, as is the case with TĹ»Os.

These objects generate energy the same way TĹ»Os do: matter is accreted by the core, releasing gravitational potential energy, and the red giant envelope continues some fusion, although, of course, core fusion has been substantially disrupted by the arrival of the new degenerate core. The main difference in energy production are the ratios between nuclear contributions to luminosity and gravitational contributions to luminosity: $$L_{\text{nuc}}/L\approx0.99,\quad L_{\text{grav}}/L\approx0.01\quad\text{for white dwarf core}$$ $$L_{\text{nuc}}/L\approx0.04,\quad L_{\text{grav}}/L\approx0.96\quad\text{for neutron core}$$ Why the difference? $L_{\text{grav}}$ is proportional to $$\frac{GM_c}{R_cc^2}$$ where $_c$ refers to values for the core. The masses and radii of neutron stars differ drastically from those of white dwarfs. This becomes less important in the case of supergiant TĹ»Os (i.e. $M>10 M_{\odot}$), because convection cycles "burned" nuclear fuel back outwards into the envelope, and so energy ratios become more like those found in the case of a white dwarf core.

This difference in energy production ratios also means that the objects will remain in roughly stable states for different amounts of time; red giants with white dwarf cores can survive in equilibrium for at least an order of magnitude or more as long as TĹ»Os.

One interesting thing to note is that TĹ»Os and red giants with white dwarf cores may share some of the same problems when it comes to stability. The envelopes are expected to be composed similarly and act similarly, with the potential difference in nuclear fusion rates, and so the same dynamical instabilities are possible in both cases. However, Thorne and Ĺ»ytkow state that they find this possibility unlikely.

If you slam a white dwarf into a main-sequence star or red giant such that the white dwarf becomes the core you'd get... a red giant (or supergiant).

Perhaps that sounds odd but basically the cores of low-mass red giants are electron degenerate. They roughly consist of deep convective envelopes sitting on top of (helium) white dwarfs separated by a thin but intense shell of material undergoing nuclear reactions. Of course, most real white dwarfs are of the carbon-oxygen variety, so I imagine what you'd really get is something more like an asymptotic giant branch (AGB) star. But these are also basically red giants too. Off-hand, I can't say whether the second burning shell (hydrogen into helium) will be present.

Anyway, composition wise things might be a bit different to ordinary red giants, red supergiants or AGB stars but the overall structure will be similar: a dense, degenerate core shrouded in a big sparse envelope.

As for the Chandrasekhar limit, that only defines what happens to a degenerate object. If the white dwarf is massive enough, then once in equilibrium it would presumably start burning carbon and oxygen into heavier metals, just like a red supergiant.

As a final note, a quick search didn't turn up any literature on this. I know of material about mergers between two white dwarfs or two non-degenerate stars but I couldn't find anything on WD+MS (or similar) mergers.

The outer layers of the star will fall onto the white dwarf, forming an accretion disk as the star stuff spirals in. Like this image shows. 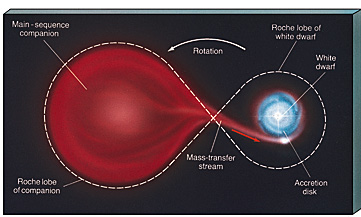 When the white dwarf steals enough material to get bigger than 1.4 solar masses, the dwarf will become a Type Ia supernova. This is probably why we never (rarely?) see Thorneâ€“Ĺ»ytkow objects made from a white dwarf instead.

If the white dwarf actually collides with its companion star before it explodes as a supernova, I could imagine it would fall into the center as the stellar material drags down the orbit of the white dwarf. Maybe then it will form something like a Thorneâ€“Ĺ»ytkow object. Or maybe it will accumulate enough material as it falls in to create a neutron star, at which point it blows itself apart in Type II supernova.

Not the answer you're looking for? Browse other questions tagged star neutron-star white-dwarf stellar-dynamics thorne-zytkow-object .

2
What would be the product between the collision of a white dwarf and a main sequence star?

4
How bright can white dwarf stars glow as they accrete matter?
4
Can life survive on the equator of cooled and fast rotating white dwarf or neutron star?
6
How could a neutron star collapse into a black hole?
6
Why does the Chandrasekhar limit affect white dwarfs differently?
3
Why can't neutron stars ignite and explode?
3
What would happen to the Sun's evolution if it collided with another yellow dwarf?
2
Would dropping a white dwarf or a "still-hot" stellar core into a large planet or brown dwarf create a star?
3
Can a neutron star ever be less than about 1.44 solar masses (the Chandrasekhar limit)? Why not?
6
The two channels of Type Ia SNe and their use as standard candles