When a particle travels through spacetime, this is sometimes illustrated moving in flat grid with various depths. How accurate is this way of imagining gravity?

Can the gravity well be infinitely deep?

Is all gravitational wells infinitely deep at the exact center? So that if a particle could be made small enough to fit within the center, it would become a black hole.

Newtonian gravity of a point-source can described by a potential $\Phi = -\mu/r$. If we suppress one spatial dimension and use it to graph the value of this potential instead, we get something that looks very close to this illustration, and is indeed infinitely deep at the center--at least, in the idealization of a point-mass. And farther away from the center, it goes flat, just as many illustrations like this have it.

Illustrations like this are fairly common, and I'm guessing that they're ultimately inspired by the Newtonian potential, because they have almost nothing to do with with the spacetime curvature.

Here's an isometric embedding of the Schwarzschild geometry at an instant of Schwarzschild time, again with one dimension supressed: 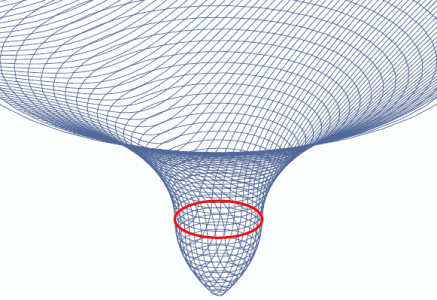 Above the horizon (red circle), the surface is a piece of a paraboloid (the Flamm paraboloid). Unlike the potential, it does not go flat at large distances.

Being isometric means that it correctly represents the spatial distances above the horizon at an instant of Schwarzschild time. Below the horizon, the embedding isn't technically accurate because the Schwarzschild radial coordinate does not represent space there, but time. Although if we pretend it's spacelike below the horizon, that would be the correct embedding. Picture the below-horizon part as having one-directional flow into the singularity.

Since we've only represented space and not time, the embedding is not enough to reconstruct the trajectories of particles in this spacetime. Still, it is a more accurate representation of a part of the spacetime curvature of point-source--specifically the spatial part.

The velocity of the object from this perspective, would seem to increase, until a point - where the velocity in x,y coordinates starts to decrease due to most of the motion happening "down" the time dimension. Is this also correct? Would a photon seem to slow down when moving down the well, if seen from above?

The above is an embedding of a slice of spatial geometry, and is not a gravity well. The mathematical form of the paraboloid above the horizon is best described in cylindrical coordinates as $$r = 2M + \frac{z^2}{8M}\text{.}$$ Here the vertical $z$ coordinate doesn't mean anything physically. It's purely an artifact of creating a surface of the same intrinsic curvature in Euclidean $3$-space as the $2$-dimensional spatial slice of Schwarzschild geometry.

For the Schwarzschild spacetime, radial freefall is actually exactly Newtonian in the Schwarzschild radial coordinate and proper time, i.e. time experienced by the freefalling object, rather than Schwarzschild time. So the Newtonian gravity well isn't actually a bad picture for the physics--it's just not the geometry and so is not a good representation of how any part of spacetime is curved. For non-radial orbits, the effective potential is somewhat different that than the Newtonian one, but ignoring the effects of angular momentum gets us the Newtonian form.

Can the gravity well be infinitely deep?

Only if the spin parameter of a rotating black hole is maximal so that the rotation speed of the horizon would be the speed of light $\rm (a=M)$ the integral of the $g_{\rm r r}$ component blows up, and the isometric embedding of the radial plane goes infinite at the horizon (see Bardeen 1972, Fig. 2). Here is Flamm's paraboloid for all spin parameters, as long as the spin is subextremal the distances are finite (when $\rm a=0$ the exterior Schwarzschild solution is recovered):

Not the answer you're looking for? Browse other questions tagged gravity general-relativity .

7
How deep and shaped is the depth of a black hole?
5
Universe as 2d sphere surface - a round trip?
3
Is a black hole a 5 dimensional vortex?

3
Does spacetime return to being flat?
9
What is spacetime 'made' of?
1
How is mass curving spacetime?
1
Dark Matter Curvature
0
Space curvature and its rotation
1
Is there a limit to how fast spacetime can bend/warp around an accelerating object?
2
FLWR and curvature
2
What is the best visual-aide model that most accurately depicts objects moving through warped spacetime?