How do you target a radio telescope on the precise object you wish to observe? You can point it in the general direction but how do you get the information from the exact point in the sky that you are investigating? This seems self evident with an optical telescope but not with a radio telescope.

When you use several dishes in an interferometer, you can increase their effective accuracy and decrease their collective beam width.

A bit more info on the mechanics of the Lovell telescope:

So, servo motors and presumably, calibration are what enables this accuracy.

The Lovell telescope has 2 elevation drive motors with gearboxes on each side of the dish. These can be driven so that one motor pulls the dish, and the dish drags along the second motor. This eliminates gear backlash in the system: the two gear trains are "wound up" in opposite directions. This means they can make adjustments without gear backlash interfering. (source: a video presentation that runs in the visitor center at Jodrell Bank)

Further reading: the story of Jodrell Bank, and a Radio Electronics article.

A common technique to estimate the beam position on the sky are so called pointing measurements. Ideally you try to use a radio point source with a known position on the sky. Scanning this point source with your radio beam will give maximum signal strength once the beam is centered on the object. By doing this for example as a cross-scan you are trying to establish the detailed angular position of the max. signal strength. 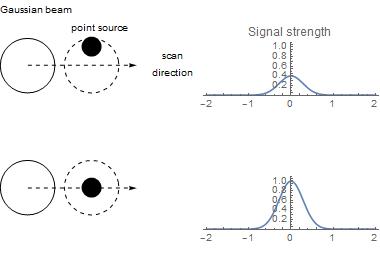 There are some problems involved. First of all, there are not too many radio point sources on the sky (depending on the frequency you are measuring). Maser emission is usually a good candidate. But for higher frequencies the list becomes very short. A commonly used pointing source for carbon line emission receivers is the carbon star IRC 10216. Also planets are used as pointing sources, because they are effectively point sources for most of the non too big telescopes. Depending on the frequency they are suffieciently radio bright to be used.

You can also point on extended objects where you know the shape exactly, e.g.
cross pointing at the stellar or lunar disk is also used. Usually these pointing measurements have to be performed at multiple elevations to establish a good model of the pointing. This is for example because the radia antennas suffer from gravitational deformation depending on the elevation they are looking at (they are not infinitely stiff structures). The also suffer from thermal expasion, wind pressure, etc. (See for example : http://ipnpr.jpl.nasa.gov/progress_report/42-159/159A.pdf , and http://lss.fnal.gov/archive/other1/iram-298.pdf )

All these techniques depend on the visibility of the pointing sources. An alternative is the usage of an optical guiding telescope that is attached to the radio telescope. Here you use optical star positions to determine your pointing. Then you just have to establish the relative alignment between the optical axis of the optical telescope and the radio beam. This of course requires the visibility of stars, i.e. you can use it only during night observations ( while sun pointing is used during day time). The Herschel satellite used an optical guide telesope (pointing in the opposite direction) to point the telescope. ( see here: http://herschel.esac.esa.int/Docs/Herschel/html/ch02s04.html)

All telescope mounts are calibrated with several known target objects, but to initially line up with said objects it is possible to use eyeballing and then moving the radio-telescope around until reaching a peak value from instruments, which would indicate you are pointing directly at the object. I'm not sure how the professional observatories manage it, but it would be a similar process.

There are two parts to answering this, both of which have already been touched in previous answers. I happen to be a member of a volunteer organisation that brought an old telescope back into operation, and looking through old documents, we could pretty well reconstruct what the discipline's pioneers did when facing this problem.

You want to start out building good mechanics: very solid foundations and precise drive systems so that there is no "wobble" in any dimension, no slack between individual drive gear teeth and all movements are continuous and smooth. This was discussed in Hobbes' answer.

Secondly, you need precise angular measuring systems for the position of your instrument. You also need to understand how your telescope and receiver mount move and bend when being tilted towards the horizon.

But those two combined will only give you a machine-centric view of the direction of the telescope. As discussed in Markus Roellig's answer, you will then start out with creating a pointing model for your telescope; measuring the position of known so-called calibration sources and comparing the measured positions with the positions from literature.

But how did the authors of radio source catalogues come up with the positions of the reference sources? Well, "our" telescope started out with a small cabin with an optical telescope mounted within the steel structure of the dish. Initially, it was pointed at local structures on the ground that were equipped with RF transmitters to perform an alignment of the optical telescope and the radio telescope's beam axis. Later, the setup could be used to identify optical counterparts to bright radio sources in the sky. From these beginnings, you could iteratively build more comprehensive maps and catalogues.

I stumbled across this page while searching for pointing accuracy information for other telescopes. I currently work at Jodrell Bank and I'm afraid most of the information presented about the Lovell Telescope, at least, is basically incorrect or at least misleading.

The telescope definitely does not have pointing accuracy to within 10arcsec rms.

The first point here is that there's a difference between absolute pointing accuracy and relative accuracy while a source is being tracked. As touched on by others, diurnal temperature variations along with wind have the largest effect on absolute accuracy and we regularly find telescopes are arcminutes away from where they should be, before observations are started.

The technique is to add "offsets" into the pointing model by tracking bright calibrator source for a short time. This is repeated roughly hourly, depending on what frequency the telescope is operating at.

Now, the most popular answer claims 10arcsec rms, which might be true on short timescales, but definitely not in absolute terms without current offsets. Further, the pointing model itself -- the thing which tells the telescope how and where to track -- is only quite basic for the Lovell at the moment. This is in contrast to many other observatories and one of the top priorities for improvement at the moment. The pointing model can lead the telescope away from the source over long periods of time, which is why regularly resetting the pointing is so important.

The answer is correct in saying that the biggest issue in terms of moment-to-moment pointing accuracy is Servo control -- the system which turns computer requests for a particular direction into mechanical reality. Actually, the dish sagging under its own weight only really affects the beam shape and sensitivity, not the pointing. The Lovell telescope, and many others, use motors working against each other to achieve a consistent drive rate and this works remarkably well. The lurches and wobbles are of order 1/100 the beam width, which makes them basically negligible.

I'm assuming your question is about fixed dish radio telescopes, like Arecibo. (For what it's worth, there are non-fixed radio telescopes, such as Green Bank Telescope, that target like any other telescope.) Arecibo uses a spherical reflector instead of the traditional parabolic reflector, and a mobile suspended structure above the primary reflector containing a secondary and tertiary reflector. Moving this structure allows the telescope to aim at different parts of the sky. It's still limited, however, due to the fixed dish, to roughly 30 degrees from the zenith.

The most important thing to remember is that to a good first approximation "all" you need to do is get the source in the telescope's beam and avoid any conflicting sources. As @Hobbes noted, the beamwidth (in radians) is the wavelength/dish diameter. (Specifically, it's 1.2*wavelength/diameter -- see Wikipedia.) Even for big dishes this can be large: multiple degrees, though it gets down into the arc minute range for higher radio frequencies.

Individual dishes are steered by moving something: usually the dish, but in the case of one like Arecibo, by moving the feed horn. There's no real need to steer more accurately than a fraction -- a quarter, say -- of the beam width.

Even a big dish like Green Bank's isn't used much for imaging (its images would have a resolution of many arc minutes at best), but to measure the source's time variation at a variety of wavelengths. And for this it just needs the source to be somewhere near the center of the beam.

So, for this kind of telescope, you need pointing accuracy ranging from several degrees down to maybe ten arc minutes. Somewhere in the system, there's a gearbox and motors which drive the dish, and there are indicators which show position. Once this is calibrated -- probably by making accurate measurements of the dish's actual position as a function of the gearbox readings -- this accuracy of pointing can be done by driving the dish to the desired position.

But the resolution of an array like the VLA is much better than the resolution of the individual dishes. (The Wikipedia article on the subject is mediocre, but tracing down some of its references will help a lot.) Basically, a single very large dish is constructed mathematically by combining together the signals received at each individual dish (both intensity and time) and the precise location of each dish (but not so much where each was pointed!).

The ultra-precise pointing that's possible from an interferometer comes from the mathematical processing of the data, not from the mechanics of the pointing of the individual dishes. (In fact, there are a number of useful interferometers -- LOFAR in the Netherlands is a good example -- which don't point at all,, but basically are comprised of omnidirectional antennas.)

2
How did single dish (or single receiver) radio telescopes originally generate images?
4
What is the highest granularity focal-plane array on a dish radio telescope? Or is this the ONLY ONE?
3
Open source library to calculate image from signals of a distributed set of radio dishes?
2
About coordinate systems and angle differences

8
What is a radio "homology telescope" and is the 500m dish in China one?
2
How do radio telescopes gather information about visible light?
8
Highest frequency that's been imaged by a radio telescope?
3
Open source library to calculate image from signals of a distributed set of radio dishes?
12
How are radio telescopes pointed?
5
Do circa 1 THz radio telescope front end amplifiers actually down convert before amplifying? At what frequency does amplification become untenable?