Conceptual Doubt regarding the calculation of the Solar Constant

The Solar constant is the intensity of the solar radiation in the upper atmosphere. It's value is about $1400$ $Wm^{-2}$.

I understand the mathematics but have trouble in interpreting the meaning of the solar constant. The Intensity formula used above is generally depicted by authors as follows (as per my understanding): There is a sphere around the Sun of radius $d$ and if the power is radiated equally in all directions then each point on the Sphere receives an Intensity $I=\frac{P}{4\pi d^2}$. But the Earth is not a point object, so is this assumption valid?

Next, what do you mean by the upper atmosphere? I've come across another version:

The Solar constant is the intensity of the solar radiation in when the sun is directly overhead. It's value is about $1400$ $Wm^{-2}$.

I guess my confusion is due to a lack of an intuitive understanding of this concept and I would be grateful if anyone could provide me with one.

Imagine you have a solar collector measuring one square meter, which can directly measure the power (energy per unit time) striking it. If there are layers of atmosphere above the collector, some of the incoming light is absorbed or reflected by particles in the atmosphere, so you won't measure as much power as if you place the collector in space at the distance of Earth's orbit, with no atmosphere between you and the Sun. But if you place the collector in the upper atmosphere of the Earth, the density of atmospheric particles above you is so small that they absorb/reflect only a negligible amount of power. Orientation is also an issue--you'll get the maximum power if you orient the plane of the collector so that it's perpendicular to the direction of the incoming rays. If it's not perpendicular, then if you approximate the incoming radiation as a set of parallel rays which each carry an equal amount of power (a standard approximation in optics) then fewer rays strike the collector when it's at some angle that's not perpendicular to the rays. All this is illustrated in the following diagram (from this page), with the two possible orientations of the solar collector illustrated in gray, and the light rays illustrated as black lines: 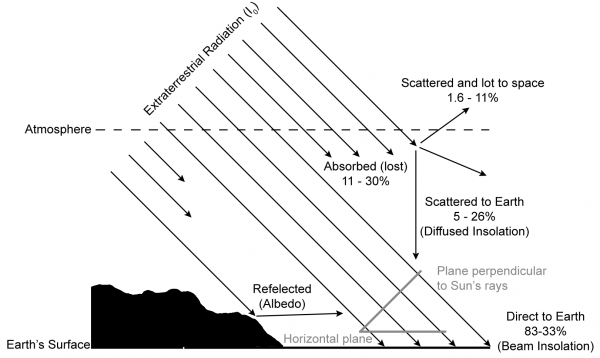 The solar constant is defined to be the power you get on such a surface of unit area if it's not being obstructed by atmospheric particles, and if it's oriented perpendicular to incoming rays so that it receives the maximum possible power at that location.

One aspect of the orientation issue that's important to understand is that if you orient your solar collector so that it's parallel to the ground (so that it would be lying flat if it was actually at ground level), then it will only receive the maximum power if the surface of the Earth is itself perpendicular to incoming rays from the Sun at that point, which is not true in the above diagram. It would only be true at the point on Earth that's the dead "center" of the Earth as seen by an observer looking at it from the Sun's position, or the point where the gray line connecting the centers of Earth and Sun intersects with surface of the Earth on this diagram: 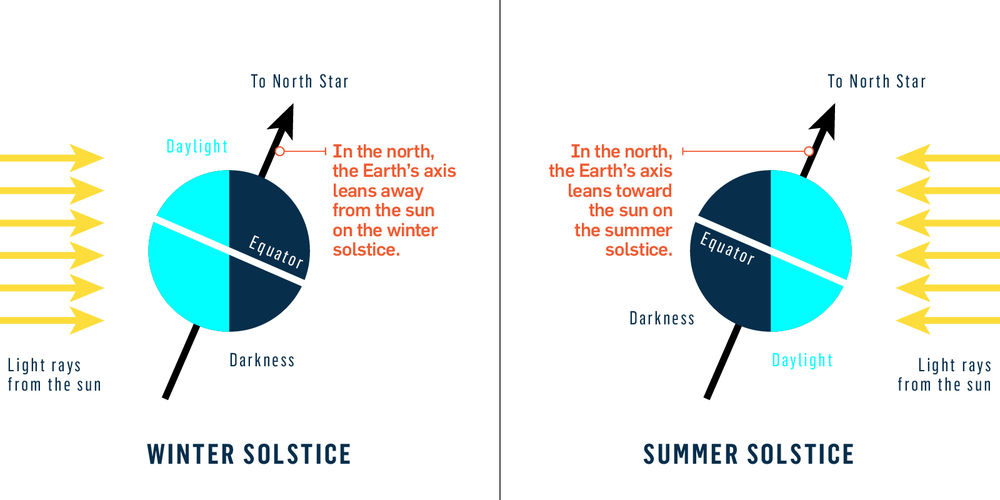 It's true that since the Earth is not a point, an observer in the upper atmosphere directly above that point on the surface would not be at exactly the same radius from the Sun as the radius of Earth's orbit (defined in terms of the position of the center of the Earth), but if you actually do the calculation of the solar constant at the radius of Earth's center vs. the radius of the point on the surface that's closest to the Sun, the difference is very small so it can be ignored if you're only stating the solar constant to nearest Watt/meter^2 or even the nearest tenth of a Watt/meter^2. The nominal solar luminosity is defined to be $3.828 \times 10^{26}$ and 1 AU is defined as 149597870700 meters, and if you use the formula you mentioned to calculate the solar flux at 1 AU it works out to 1361.1664654 watts per square meter. The radius of the Earth at the equator is about 6378 meters, so at an equinox when the Sun is directly overhead at the equator, an observer seeing the Sun directly overhead should be at a distance of 149597870700 - 6378 = 149597864322 meters, if you use the same formula to calculate the solar flux at this radius you get 1361.1665815, so it only makes a different if you want precision beyond the second decimal place.

Not the answer you're looking for? Browse other questions tagged radiation or ask your own question.

1
The formation of absorption lines in solar spectrum
2
Question about radiation pressure
5
A question about calculating the radius of a comet
4
Is there a connection between the solar wind and the cosmic radiation?
1
How much solar UV radiation would someone get who were on the surface of Titan?
17
Problem regarding the absorption lines of the sun