What are the conditions for an ionosphere to form?

What are the conditions for an ionosphere to form on a given planet?

Factors I could think of are

According to the paper "Simultaneous ionospheric variability on Earth and Mars" (Mendillo et al. 2003), the overall structure of any ionised region of a planetary atmosphere depends on

a blend of in situ production and loss processes, plus effects of transport of ionization into or out of the local region of interest

Specifically, according to Mendillo et al., the only significant influence is from the photon flux from the parent star - so, the further the planet is from the star, the less the incoming photon flux. The other mechanisms are suggested to be planetary-based, including (from the article):

the Mars Express, Venus Express and Cassini-Huygens missions have revealed the importance of this process at Mars, Venus and Titan, respectively.

It should be noted, that for planets without magnetic fields (Venus and Mars for example), the Max Planck Institute for Solar System Research page "Research about the planetary plasma environment",

The ionosphere is assumed to display two distinct states, "magnetized" and "unmagnetized", depending on the penetration depth of the solar wind magnetic field.

UV rays from the sun hit the grains and ionize them. According to their calculations, this process produces enough charge (positive grains surrounded by negative electrons) to create the observed ionosphere.

The process with the lunar ionosphere is illustrated below (from the NASA page linked): 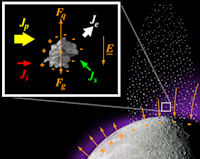 @Hackworth has also asked this question on the Geosciences SX site (link to question), where I provided an answer (link to my answer). I'm including a link to my answer there from here in case it proves useful to somebody.

Not the answer you're looking for? Browse other questions tagged planetary-atmosphere or ask your own question.