How to form Copper from Calcium in a supernova explosion?

What are the reasonable chain of reactions to form copper (63, 29) from ca(40, 20) during supernova explosion? And how it will happen? I do not understand the theory behind it. I thought that the reaction will end at Iron and now it does not make sense to me.

Copper is not thought to be primarily made in a supernova. It is thought to be mainly produced by the s-process of slow neutron capture onto iron-peak nuclei that already exist inside a star. These reactions are endothermic.

The copper is then distributed into the interstellar medium by a later supernova explosion in the same star.

If there are no "seed" iron-peak nuclei (e.g. in the first/second generation of stars), then copper can be inefficiently produced by explosive r-process neutron capture during supernovae explosions. However, this would not contribute very much to the copper we see on the Earth. 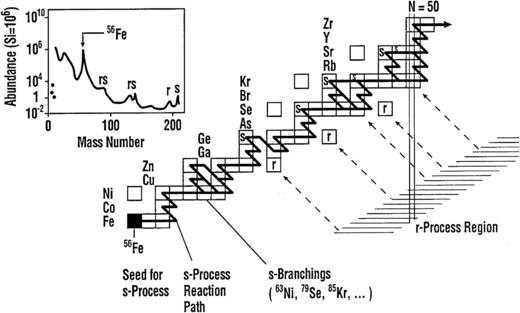 Not the answer you're looking for? Browse other questions tagged supernova or ask your own question.

13
How will the recent appearance of a supernova, the closest in 27 years, help reduce the uncertainties in our measurements of dark energy?
3
Sun from SuperNova
18
Does any iron fuse in stars before they go supernova?
15
How quickly does a supernova heat up/expand?
34
Are there observable changes in a star about to become supernova, minutes or hours before the explosion?
2
Mechanics of Supernovae
0
When a fast-moving star goes supernova, how will the resulting remnant evolve?
1
How do black holes form from stars that go supernova