What is the volume of the universe?

Of course it is not exactly known how big the universe is, but I thougt that the universe is about 100 billion lightyears in diameter. But if that is true can you also make an estimation of the volume of the universe?

Based on your comments, I think your confusion comes from having seen the classic rugby ball-shaped image of the CMB. The CMB we observe is not from the whole cosmos, but only from a thin and completely spherical shell centered on us. This light is redshifted by an amount $z=1100$.

Just as the shell of Earth can be projected onto a rugby-shaped figure using a Mollweide projection, so can the shell of the CMB. Here's a figure from Universe Adventure that can help visualize: 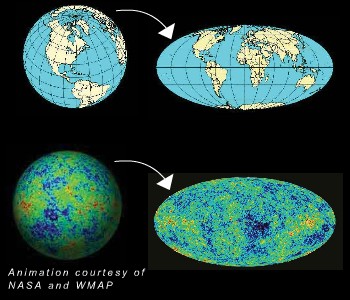 The volume of the observable Universe

The volume of the whole Universe is probably much larger, and may in fact easily be infinite.

Cosmologists estimate the age of the universe at 13.8 billion years. The most distant objects we could theoretically observe emitted light that long ago; light from more distant objects hasn't reached us yet. Due to expansion of the universe, that horizon is now about 46 billion light-years away. If we assume uniform expansion in all directions, we can approximate the observable universe as a sphere of that radius, consistent with the diameter you'd heard. I figure its volume as roughly $4 \times 10^{32}$ cubic light-years. The shape and size of the unobservable universe are anyone's guess.

I'm assuming you're talking about the visible universe, not the observable universe. If so, the comoving distance we could see is about 45.7 Billion light years. Even though the universe is only 13.8 Billion years old, due to expansion it took longer than that to reach us. It'd be like walking up an escalator thats going down vs walking up stairs, I'll get there but it'll just take much longer. A COMOVING distance would relate better to the person on the stairs, it factors out expansion, thus making calculations much easier. Using the comoving distance, figuring out it's volume is simple math, unless of course you plan on figuring it's volume without mass, just the space. Then of course you'd have to find each masses volume, subtract and blah, blah, and impossible, since we don't know every object in the visible universe. Using V=4/3πr^3, V = approximately 3.99795E+32ly^3. Or, 399 nonillion Ly^3.

Now imagine the escalator you're on starts running just as fast as you, eventually faster; You'll never reach the top, in fact you'll move away from the top despite running towards it. This is what is happening to our visible universe, it's slowly receding faster than light due to expansion. So the light will continue to travel towards us but will never reach us once it's emitted beyond about 4500 megaparsecs away, it's event horizon, sometimes called particle horizon. Point being, the visible universe volume is constantly shrinking.

The Universe is infinite and always has been. Yes, it is expanding, but what does that mean when it exists everywhere? Yes, it can appear to have exploded from a point, but that "point" is a universe that is infinite in size and has no edge. There is no way to look at it or describe it from "outside".

The diagrams you often see of the history of the Big Bang show a poor concept of expansion and are just misleading. They imply an outside view is possible.

See the excellent answer to a similar question here: https://physics.stackexchange.com/questions/136860/did-the-big-bang-happen-at-a-point

Not the answer you're looking for? Browse other questions tagged universe .

0
Volume of the observable universe