Can you see city lights on the Moon from Earth?

This is the opposite of another question. That question is about whether you could see cities on Earth if you were standing on the Moon.

Let's there are cities on the Moon and you're standing on the Earth on a clear night. Could you see the city lights?

If you're looking at Earth cities from the Moon, your line of sight is not affected by atmospheric turbulence because the Moon is airless. But if you are on Earth, then you have to look through the turbulent atmosphere to see faint lights. So you won't have to put up with the turbulence that makes stars look blurry or twinkley from the Earth.

But if you're on the Earth, any city lights on the Moon might look blurry or twinkley from our atmospheric turbulence. If it helps, imagine yourself at the top of a mountain so there is less atmosphere to look through and hence less turbulence.

In this picture of the Moon (and Venus in the background), imagine cities on dark part of the Moon's surface facing Earth. Those city lights should be easier to see than cities within the lit crescent. 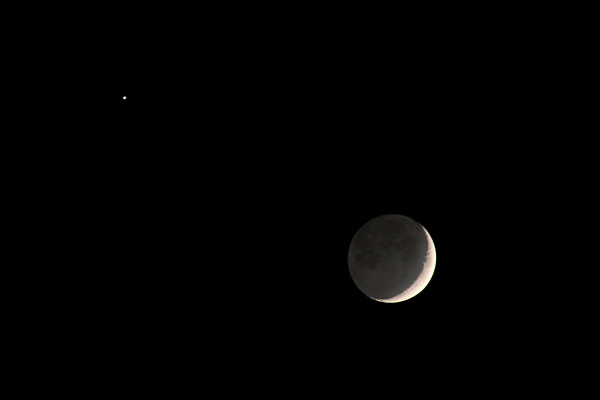 It is possible but unlikely. Here is a really good 'Science 2.0' article about the possibility (http://www.science20.com/robert_inventor/could_you_see_moon_city_lights_or_a_greenhouse_from_earth_just_for_fun-157480). Essentially, you likely wouldn't see the light on Moon settlements because there would need to have many thousands of bright lights and windows- both of these would be impractical on a moon base (windows let in radiation and are expensive, and bright lights waste valuable power). Furthermore, in order to reach a magnitude of brightness to constitute as visible, there would have to be a very large amount settlements concentrated together.

Not the answer you're looking for? Browse other questions tagged the-moon amateur-observing atmospheric-effects .

24
Can you see man-made lights on the dark side of the Earth from the surface of the moon with the naked eye?

24
Can you see man-made lights on the dark side of the Earth from the surface of the moon with the naked eye?
0
Why doesn't the Moonrise appear red when viewed from orbit?
4
How Soon Could a Waxing Crescent Moon Be Seen?
2
How big would the Earth look from the Moon?
2
Are the darker blue/black areas in this picture what the atmosphere of Jupiter looks like without clouds?
2
Calculating Air Mass at Zenith for observing sites above sea level?
12
How does the Moon look like from different latitudes of the Earth?
7
How much do starlight and artificial light illuminate the Moon?
5
Is it practical to build a giant telescope in Moon? (Considering the fact that the atmosphere of moon is very rare)
3
Why could I so easily see and photograph such a bright totally eclipsed Moon from a bright city road? (May 26, 2021 total lunar eclipse)