How much time does the ISS take to repeat its orbit?

I used to go to my roof to see the ISS, but it is not always visible. Then it appears again but does it appear with the exact same orbit as I saw before? Thanks!

Objects in orbit pass over the surface above what's commonly called their ground track. For objects in low earth orbit, though they go around the earth every 1.5 or more hours, the Earth rotates beneath them so they don't trace a simple "circle" over the same points on land. 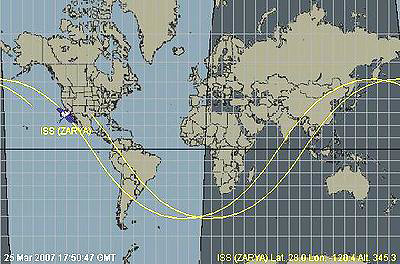 The orbit is around the Earth in a fixed plane, so we are likely (but not guaranteed) to see the satellite pass over 12 or 24 hours later.

Not the answer you're looking for? Browse other questions tagged orbit artificial-satellite iss or ask your own question.

5
Is there an orbit that could cause regular debris showers like in the movie Gravity?
1
"What was that spot in the sky?" - How to identify satellites
5
Does the Giant Impact Hypothesis explain how the Moon circularized its orbit?
2
Was it a space station?
5
After what time interval do the closest approaches of Mercury to the Earth repeat?