Are there radio white dwarfs?

We have discovered about 2500 radio pulsars. Part of them show pulsations in other bands like X-ray and gamma ray. The radiation mechanism remains unclear now.

I wonder whether there are radio pulsations caused by the spins of white dwarfs. It is the best to give reference papers.

AR Scorpii1 appears to be an example. It is a binary system, consisting of a white dwarf and an M-type red dwarf. It was apparently originally classified as a $\delta$ Scuti variable star, but it was later discovered to be a true close binary, with a period of 3.56 hours.

The white dwarf emits pulses, as discovered by Marsh et al. (2016), with a period of about two minutes. These are visible in wavelengths from ultraviolet to radio (see Fig. 2): 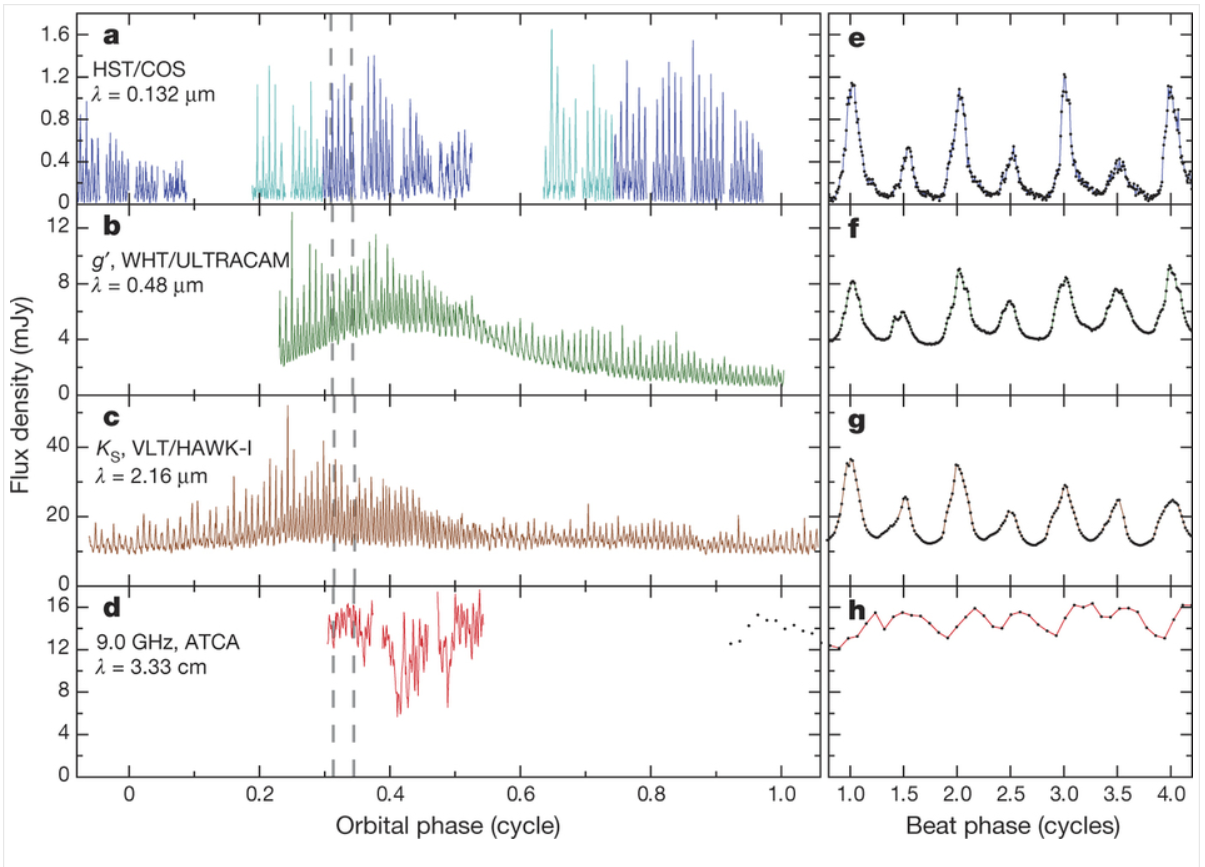 The most noticeable patterns are in the ultraviolet, and the weakest are in the radio band, but the signals are certainly detectable.

The rational for determining that the compact object is a white dwarf follows from its luminosity, its relatively long spin period (longer than any neutron star pulsar yet discovered), and the fact that the pairing with a red dwarf is "more natural" than the odd alternative involving a low-mass neutron star and high-mass red dwarf.

The system may form what is known as an intermediate polar, involving accretion onto a white dwarf influenced by the object's strong magnetic field. The other notable example is AE Aquarii, as Rob Jeffries mentioned. However, its radio emissions do not involve pulsations. Why it doesn't emit pulsating signals at radio wavelengths is another question entirely, and not one I can answer right now.

More recent results (Buckley et al. (2017)) indicate that the radio emissions from the system are polarized, similar to those of neutron stars. It seems that AR Sco shares even more characteristics with pulsars than was previously thought.

1 The Wikipedia page, I just discovered, is terrible.

Not the answer you're looking for? Browse other questions tagged radio-astronomy pulsar white-dwarf or ask your own question.

6
Brightest Radio Source In the Universe
5
Why does the Chandrasekhar limit affect white dwarfs differently?
4
Origin of terms “white dwarfs” and “red giants”?
32
If two white dwarfs collided, would they become a star?
1
Are white dwarfs the ones always absorbing mass from a companion?
3
Have any more “white dwarf pulsars” been discovered or searched for?
1
Do white dwarfs lose mass as they fade to black dwarfs? Is there a correlation between temperature, mass, and radius?
3
Do white dwarfs produce stellar wind? If not, why is that?
4
Can white dwarfs have accretion discs too?
3
Do more massive stars become larger or smaller white dwarfs?