How can I collimate a dobsonian telescope with a laser collimator?

I've had a dobsonian telescope for a while now, but I've never been able to collimate it. I thought I had it collimated once, but when I looked through it the star didn't look right, it looked kind of like a round disc with a hole in the middle. I know the basic idea behind doing it with a laser collimator, you need to get the laser to line up with the center of the primary mirror as well as line up in the center of the target on the laser itself. However, I always have a lot of difficult accomplishing this.

For starters, I always have a lot of trouble getting the secondary mirror lined up. I'll get really close, but once I get close I have a lot of trouble doing the fine tuning to get the laser in the middle. I'll get it in, but when I got to tighten the other screws it will no longer be lined up. I'll try to account for the tightening as well, but it's always a guessing game for me when it comes to knowing which screws to loosen and tighten so that the laser winds up where I want.

I've tried looking around at resources online, but none of them go into enough detail into aligning the secondary mirror. They just say "adjust the screws until it's lined up", which doesn't solve my problem, since I have trouble figuring out exactly which screws to adjust and when. I'm also confused as to what I should see through my telescope when it is properly aligned. Most of the sites just use a diagram, but I'm never really sure what to make of the diagram. The one time I did line it up it looked like a round disc with a hole in the middle, which I didn't think looked right.

So to summarize, the main problems I have are:

Can anyone offer some detailed instructions, and possibly a video, of how to collimate a dobsonian telescope with a laser collimator?

Note to future answerers: We have been working in the Astronomy.SE main chat room with OP to solve this problem and established it's actually a matter of focusing that resulted in problems described (telescope was either too intrafocal or extrafocal), not collimation itself. This is a video on YouTube that OP said was exactly how the problems looked like. Granted, focusing can be technically called collimation too, and indeed that demonstration video calls it as such (albeit misspelled), since it's still about adjusting positions of primary and secondary mirror in dobsonian or newtonian telescopes (dobsonian is a type of newtonian), but the former is a lot simpler to solve by turning focusing knobs and achieve optimal illumination.

First thing to know is that any laser collimator will likely have the beam strong enough to cause damage to your eyes if pointed directly in them, or damage strong light sensitive equipment, like for example digital cameras, so be careful with it and take precautions. Carefully read instructions on how to handle and use it, before you do so. This is how a laser collimator might look like: 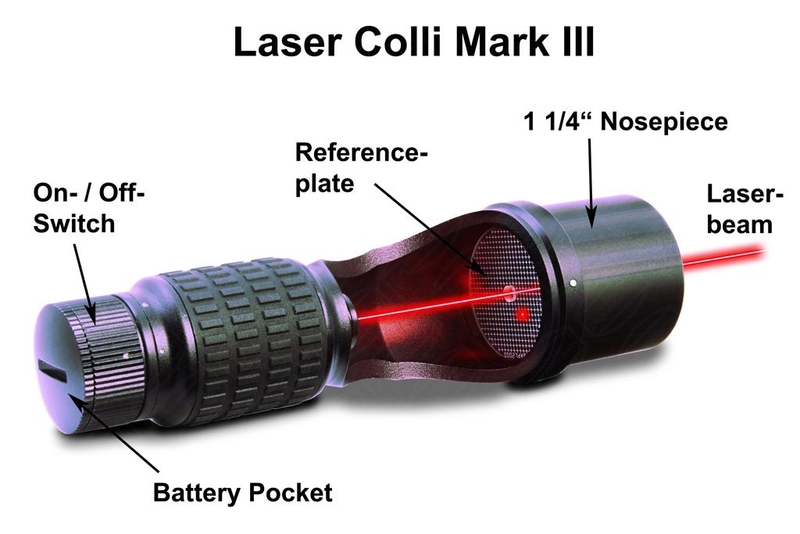 Next thing to do is make it functional by inserting batteries or plugging its power adapter and testing it actually works by turning it on with the switch, if it has it (probably does). Once you'll establish your laser collimator is turned on and functioning by observing (usually ruby red) light beam spot it makes on any neutral surface, turn it back off and attach any adapters on it you might need to help you attach it to your telescope's focuser. This is how your telescope's OTA (Optical Tube Assembly) might look like:

Rotate your collimator's targeting faceplate towards your telescope's primary mirror (on the telescope's bottom) and turn on the laser.

Angular alignment of the secondary mirror 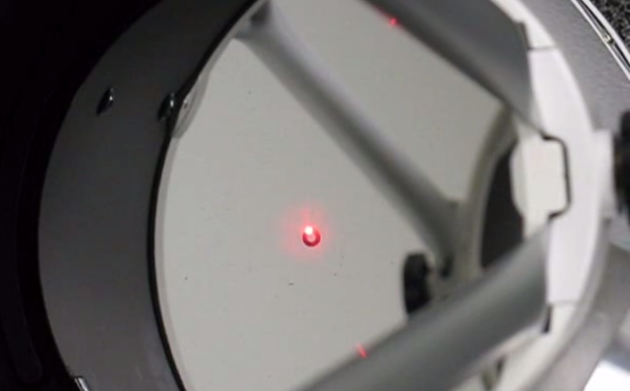 Try to bring the dot more directly into the doughnut center than on the photograph above, though. I intentionally didn't select a photograph from when it was in its dead center, because of the light reflection covering the doughnut ring completely, rendering it nearly invisible. 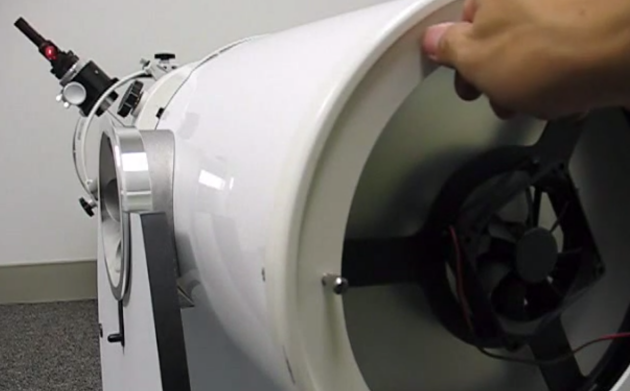 Another way to check your collimation progress when adjusting collimation screws is by checking the projection laser dots on the secondary (top) mirror and making sure both laser dots are overlapping into one single spot, but that might make your adjustments of the primary mirror somewhat harder, so using the targeting faceplate of the laser collimator would be my suggestion and perhaps check alignment of the secondary mirrors laser dots projection for the last finishing touches to collimate your mirrors as precise as possible.

Now you're done collimating your dobsonian or newtonian telescope, so it's time to remove the laser collimator by first switching it off, then untightening its compression ring and taking it out of the focuser. Once you've removed the laser collimator, insert in the focuser barlov and the eyepiece, and tighten them back in place.

Additionally, and as requested, here is the Youtube video of the Newtonian Collimation using SCA Laser Collimator that are also the source of the last two example photographs and inspiration to write the collimation procedure, courtesy of HoTechUSA YouTube channel. Make sure to browse through other similar videos on telescope collimation in this same channel.

Collimation of a dobsonian without a laser collimator

Standard collimation technique for the exact dobsonian telescope make OP mentioned has can be read in this Instruction Manual for Sky-Watcher dobsonians (PDF):

Collimation is the process of aligning the mirrors of your telescope so that they work in concert with each other to deliver properly focused light to your eyepiece. By observing out-of-focus star images, you can test whether your telescope's optics are aligned. Place a star in the centre of the field of view and move the focuser so that the image is slightly out of focus. If the seeing conditions are good, you will see a central circle of light (the Airy disc) surrounded by a number of diffraction rings. If the rings are symmetrical about the Airy disc, the telescope's optics are correctly collimated (Fig.g).

If you do not have a collimating tool, we suggest that you make a "collimating cap" out of a plastic 35mm film canister (black with gray lid). Drill or punch a small pinhole in the exact center of the lid and cut off the bottom of the canister. This device will keep your eye centered of the focuser tube. Insert the collimating cap into the focuser in place of a regular eyepiece.

Collimation is a painless process and works like this:

Pull off the lens cap which covers the front of the telescope and look down the optical tube. At the bottom you will see the primary mirror held in place by three clips 120º apart, and at the top the small oval secondary mirror held in a support and tilted 45º toward the focuser outside the tube wall (Fig.h). The secondary mirror is aligned by adjusting the central bolt behind it, (which moves the mirror up and down the tube), and the three smaller screws surrounding the bolt, (which adjust the angle of the mirror). The primary mirror is adjusted by the three adjusting screws at the back of your scope. The three locking screws beside them serve to hold the mirror in place after collimation. (Fig.i)

Point the telescope at a lit wall and insert the collimating cap into the focuser in place of a regular eyepiece. Look into the focuser through your collimating cap. You may have to twist the focus knob a few turns until the reflected image of the focuser is out of your view. Note: keep your eye against the back of the focus tube if collimating without a collimating cap. Ignore the reflected image of the collimating cap or your eye for now, instead look for the three clips holding the primary mirror in place. If you can't see them (Fig.j), it means that you will have to adjust the three bolts on the top of the secondary mirror holder, with possibly an Allen wrench or Phillip's screwdriver. You will have to alternately loosen one and then compensate for the slack by tightening the other two. Stop when you see all three mirror clips (Fig.k). Make sure that all three small alignment screws are tightened to secure the secondary mirror in place.

There are 3 hex bolts and 3 Phillip's head screws at the back of your telescope, the hex bolts are the locking screws and the Phillip's-head screws are the adjusting screws (Fig.l). Use an Allen wrench to loosen the hex bolts by a few turns. Now run your hand around the front of your telescope keeping your eye to the focuser, you will see the reflected image of your hand. The idea here being to see which way the primary mirror is defected, you do this by stopping at the point where the reflected image of the secondary mirror is closest to the primary mirrors' edge (Fig.m). When you get to that point, stop and keep your hand there while looking at the back end of your telescope, is there a adjusting screw there? If there is you will want to loosen it (turn the screw to the left) to bring the mirror away from that point. If there isn't a adjusting screw there, then go across to the other side and tighten the adjusting screw on the other side. This will gradually bring the mirror into line until it looks like Fig.n. (It helps to have a friend to help for primary mirror collimation. Have your partner adjust the adjusting screws according to your directions while you look in the focuser.) After dark go out and point your telescope at Polaris, the North Star. With an eyepiece in the focuser, take the image out of focus. You will see the same image only now, it will be illuminated by starlight. If necessary, repeat the collimating process only keep the star centered while tweaking the mirror. 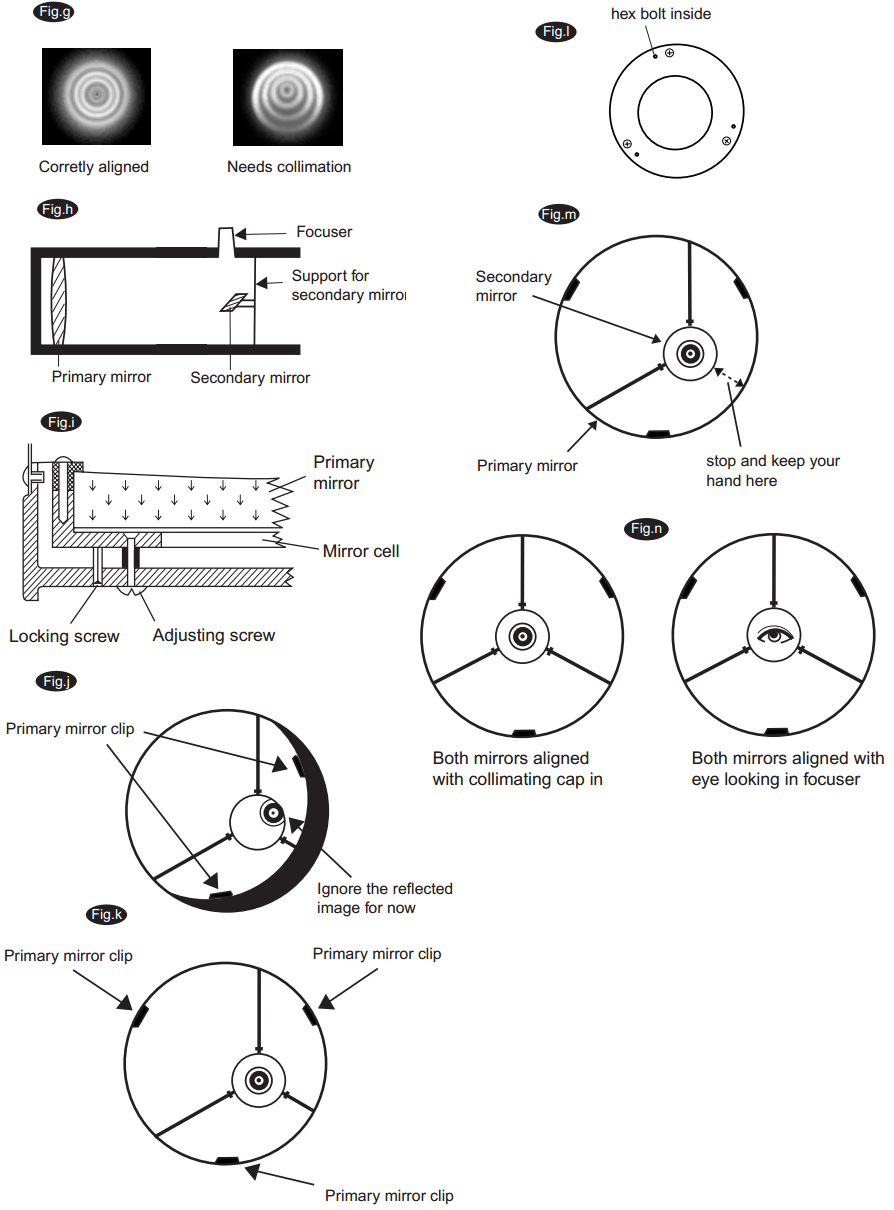 Not the answer you're looking for? Browse other questions tagged dobsonian-telescope collimation or ask your own question.

8
How can I accurately find & apply the white donut to the center of my mirror?
3
Collimator for Dobsonian, same as Newtonian?
3
Problem with Dobsonian reflector telescope
6
Telescope collimation issue
0
Laser Collimator For Dobsonian vs Newtonian
1
Laser Collimator producing oval not circle on the Primary
2
Collimating with a home-made collimation cap
4
Can a Ritchey–Chrétien telescope be collimated using a standard Newtonian laser collimator?
2
collimating AstroMaster 114
2
How to adapt small Dobsonian to use with a tripod?