How large (that is, radius) could a planet be?

I know that normal planets don't get any larger than Jupiter (or 2 Jupiter radii if hot), as adding more gas just increases density, not radius, until you reach the point of being a brown dwarf star.

That compressability, I suppose, is a property of the overall average material that forms star systems, as beyond a critical size it accretes the ambiant gas as well as dust in the cloud. That is, it's mostly hydrogen and a quarter helium with a bit of other stuff.

But what about a body made of other stuff, such as rock or metal? Without worrying about planetary formation processes, just that atoms are piled together and feel self gravity. Perhaps it needs to be grown slowly so it has time to cool before adding more. Otherwise, no special techniques: just what would happen if material of suitable composition was heaped together?

I suspect that normal ideas of minerals would not exist under that kind of pressure, even if carefully allowed to cool. But can elements other than H and He still compress their volume in the same way, or would a rocky world be able to reach sizes of millions of miles?

What about more exotic cases, like the "puffy" planet I heard of that has the density of styrofoam?

Puffy planets tend to be Jupiter or Saturn like, probably lower mass than Jupiter, perhaps lower metalicity but the most important factor is heat. Either close to the sun or recently formed. Heat expands gas planets. You're correct that as you add more mass the planet of Jupiter mass tends not to grow larger, but if there's enough internal heat, gas giant planets can get a bit larger than Jupiter. Planets as much as 2 Jupiter Radii have been observed (though there's some inaccuracy in those estimates), but growing larger than Jupiter is largely a factor of high temperature.

Rocky worlds will never grow as large as Jupiter. The greater mass will prevent it, and past a certain mass, a rocky world is unlikely to remain what we consider rocky. Above a certain mass it holds onto hydrogen which is the most abundant gas in the universe, and that would give the massive rocky world an appearance more like a gas giant.

But to answer your question in theory, if you had a rocky world with Jupiter mass and a negligible atmosphere, it could never get close to Jupiter diameter. The mass crushes the inside of the planet. Mercury for example is made of denser material than the earth. Higher Iron content, but it's less dense than the Earth because the Earth's mass crushes its rocky mantle and metallic core. When you start to get a Jupiter-mass rocky world, the crushing becomes significant and you could never build a rocky world close to as big as Jupiter. As with hydrogen, it would reach a certain maximum size, then it would begin to get smaller under the crush of gravity. Even so called "non compactible" material, does compact at the pressure inside large planets. Iron has a density of 7.874 g/cm3 and slightly less than that at high temperature, but the Earth's metallic core has a density of 12.6–13.0, and that's primarily due to crushing. When you've reached Jupiter mass, the crushing and density is significantly greater.

At about the mass of the sun the planet would be smaller than the Earth, and it would basically resemble a white dwarf star, and no longer be distinguishable as a rocky world.

I can add a few links to back this up if needed and if someone wants to run the math or give an answer with more detail, feel free.

The maximum possible radius of a planet is probably unknown to date because current observation techniques not only will give us a biased view of the distribution of planet radii but it is also difficult to tell planets and brown dwarfs apart.

However current data suggest a limit of roughly 2 Jupiter radii. 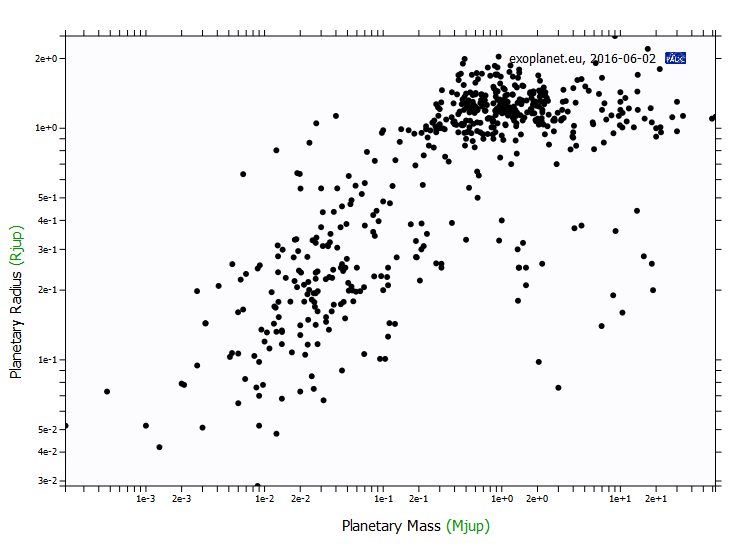 Not the answer you're looking for? Browse other questions tagged planetary-formation .

0
Why could a gas planet not get much larger than Jupiter?

4
Star System Formation questions
9
What's special about Saturn that it has distinctive rings?
4
Ejected planets during the early stages of the formation of the Solar System
8
Estimates for "undetectable" planets in extra-solar systems
3
Could a planet form without a molten state?
3
Exoplanets, Protoplanets, and planetesimals
15
The compatibility of the Grand Tack hypothesis with the "core-warping impact" theory of Jupiter's diffuse core
1
Life cycle of a gas planet?
9
What's the expected distribution of planet masses in a given system?