Why don't stars move in the night-sky as the moon does?

This is referred to as diurnal motion, due to Earth's rotation on its axis, and it affects apparent motion of stars differently depending on their position on the skies relative to the axis of Earth's rotation. For example, on northern hemisphere, the star that appears not to move at all is positioned so that the earth's axis of rotation points directly towards it, and is called a Polaris due to its role as a pole star. Stars further away from true north (not to be confused with magnetic north), will appear to prescribe a circle around it as the Earth completes one rotation on its axis: 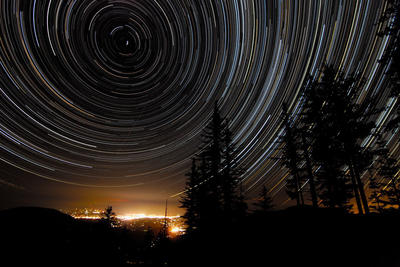 A long exposure photograph of the night skies, showing their apparent motion

So what you assert, that the stars don't seem to move isn't exactly true. Stars closer to celestial equator will move at equal apparent radial velocity as any object fixed on the night skies would (so at the speed of Earth's rotation), while the stars closer to celestial poles, while maintaining this radial velocity, will prescribe a smaller circle and appear to be more stationary. And the stars exactly aligned with the Earth's axis (like Polaris, but there isn't any such exact counterpart on the southern hemisphere), would appear not to move at all.

That's why the moon can be seen blocking out (or occulting) a bright star or planet as it slowly moves eastward in front of it for several minutes.

The actual motion of a star is too small to notice and it takes years to notice it without powerful telescopes. For general purpose, day-to-day astronomical observations, the actual motions of the stars in 3D space can be ignored.

3
How does this strategy for chasing the sunset work?
7
Where exactly does the Moon flip, given that it appears the other way up in the other hemisphere?
4
Can you see city lights on the Moon from Earth?
3
Inverse of the sunrise equation - finding locations with a given sunrise time on a given day
7
If earth changed its orbit, what would happen to the moon?
5
Was the Earth-Sun distance ever calculated based on the time difference between night and day?
1
Calculating the orientation of the night sky
24
Is it possible to completely see the edge of a half moon at night?