When we see half moon, why is it always the lower half?

Even if we see a crescent moon, always the lower circumference is visible. Why we never see this? 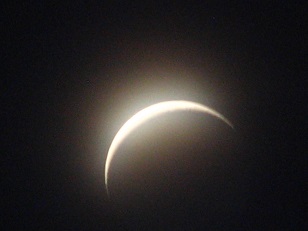 PS: this image is vertically inverted.

Actually, you sometimes can see the Moon illuminated by the Sun from the top, and therein lies the answer to your question - during day. When looking at the Moon during night time, the side of the Earth where you're standing and looking at it is pointed away from the Sun, while this is reversed during the day. The illuminated side of the Moon is also facing the Sun, of course. So we have:

To add to TidalWave's answer, here's another way to think about it. Here are some facts:

If you don't understand why any of these facts are true then think about the relative positions of the earth, moon and sun in space until you do.

So how then can we possibly have a downward-opening thin crescent? These facts imply that this only happens when the moon appears to be very close to the sun and farther west than the sun. Which means that the moon is going to set before the sun does. So therefore the only time when such a moon is visible is during the day, and during the day the sun is much, much brighter than the thin crescent moon.

By contrast, the upward-opening crescent happens when the moon is close to the sun and farther east, which means that there is time after the sun has set but before the moon has set when it is still in the sky and bright enough to be seen in the dusk.

It very much depends on where on the globe you are in terms of your latitude. From mid-northern or mid-southern latitudes the terminator (line between dark and light parts of the moon) will appear roughly vertical around midnight local time at first and third quarter ('half full'). If you observed the same phase on the same night at the same local time from the equator the terminator would be roughly horizontal. Same goes for the constellations, it took some getting used to when I visited the southern hemisphere to see Orion (and all the other constellations I was familiar with) 'upside down'.

14
Why can we sometimes see the moon during the day?
2
Are lunar occultations visible to the naked eye?
4
Can you see city lights on the Moon from Earth?
6
Why can I see the dark side of the moon?
7
Why did the moon have a distinct reddish edge tonight?
4
Why are tides high only on a full moon day?
3
Why does the half moon appear to have a “nose”?
4
Why do I see rainbows around the moon?
14
Why can I see sometimes a horizontal half moon instead of a vertical one?