With my little knowledge, I know this:

The center of a galaxy controls/attracts its objects (stars, planets, comets etc.) towards itself because of gravity. But the mass of the center of this galaxy appears to be less than what it should take to attract all objects of the galaxy. Hence Dark Matter is there, which makes this attraction or controlling possible.

This is the force which is pulling galaxies away from each other, and hence making the universe expand. If we don't have this hypothetical force, we cannot explain why distances between galaxies are increasing.

Please let me know how far I am from the actual meaning/definition of these terms? And how can I explain these to a layman, who has no or very little knowledge about astronomy?

P.S.: I have read this question here, which is excellent but I could not get an idea of how to explain to a layman.

Dark Matter Your understanding of dark matter isn't bad, but here's a few clarifying details. Orbits: The speed of an object's orbit is related to 2 things: the radius of its orbit and the mass inside of it. In the solar system, over 99% of the mass is concentrated at the centre, so radius is the dominant effect on orbital speed. As we look at planets further away from the sun, their orbital speed decreases. In the galaxy, it's a similar story, but with increasing orbital radius, you're also getting more and more mass inside of your orbit since the galaxy is full of other stars. Even so, we would expect orbital speeds to drop as you look at objects toward the edge of the galaxy, since the stars get more diffuse as you move out and not enough mass is inside the orbit to compensate for the increasing radius. Instead, we see that after a certain point, the orbital speeds stay the same, suggesting that there is more mass there than we can account for with stars and other visible objects.

Here is an example of a so-called rotation curve of the spiral galaxy NGC 3198: 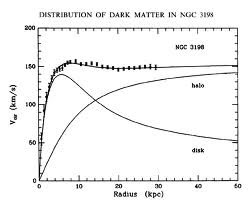 Without dark matter, we would expect the speed of objects as a function of radius (from the center of mass) to follow the curve labeled 'disk'. However, what we see appears to be the sum of the two contributions (the disk and the 'dark matter halo' which surrounds this disk), which is overplotted with actual data.

We also have evidence of this extra mass from gravitational lenses. As light passes by a large object like a galaxy cluster, its path can get bent by that object's gravity. We can see this effect when a galaxy cluster is in front of an even more distant galaxy, the light from the background object gets magnified and distorted. We can calculate the path the light must have taken to appear as we see it, and the mass needed to bend it that way can't be accounted for with just the stars and gas we see in the lensing cluster. This again suggests that there is extra mass that we can't see. 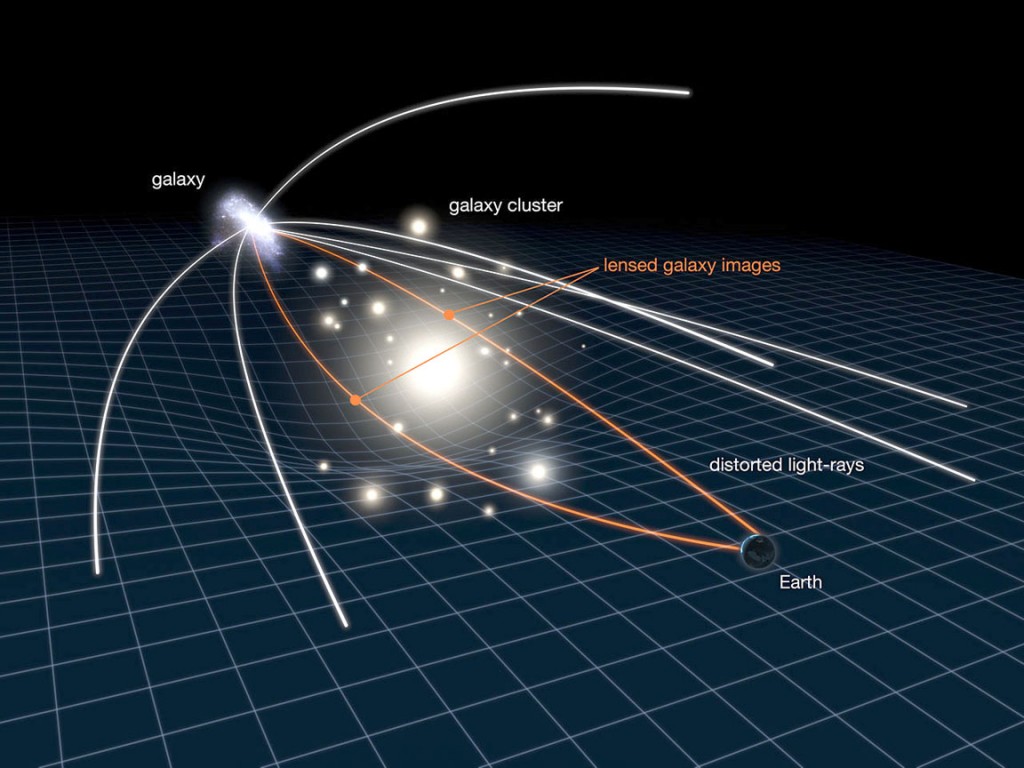 Dark Energy You're not too far off with this one, with one major distinction: Dark energy is the 'force' that's causing the universe to accelerate its expansion. We expect the universe to be expanding from the Big Bang cosmology model, but we'd expect it to be slowing down as the mutual gravity of everything in the universe acted upon each other. Dark energy appears to be a "pressure" on every part of space to expand, but it's very weak and has been dominated by gravity and other factors throughout most of the universe's history. It's only in the past few billion years it's started to take over.

It works something like this. Imagine you have a 1-D region of spacetime 1 unit long (just for convenience's sake). Here it is: |--------| Now this region has this dark energy 'expansion pressure' acting on it. Let's say it's 0.07 units per year per unit. This means that every year, this region of spacetime gets bigger by 7%. In 10 years, the length will be double: |--------|--------| Now the thing is, each of these regions has the same expansion pressure as the original one! So both will double in 10 years, and then those will double, and so on. So what happens is you get a small expansion locally, but the further away something gets the faster it's accelerating away from you. The real effect of dark energy is orders of magnitude smaller, something like 67.15 ± 1.2 (km/s)/Mpc (Wikipedia), but it still means that any galaxies more than 4.5 Gigaparsecs away from us are currently being carried away from us faster than the speed of light. (We can still see them right now because the light we see was emitted long before the expansion rate got that high.) The expansion adds up over the huge distances we see in the universe.

Dark energy doesn't affect things like planets, solar systems, and galaxies because the effect is so weak on small scales that gravity more than counteracts it. It's effect can mostly be seen over the vast empty stretches of space between galaxy clusters.

Not the answer you're looking for? Browse other questions tagged galaxy universe dark-matter dark-energy galaxy-center .

15
How do we know dark matter/dark energy exists?

20
Could light be dark matter?
4
Galaxy rotation curve and dark matter
10
Why aren't brown dwarfs the dark matter?
3
Is dark matter influenced by gravity of baryonic matter?
0
Could dark matter be "inside-out" reality?
2
Is it true dark matter was discovered whilst looking at the rotational speed of galaxies?
1
Does gravity repel when dark energy is involved?
2
The anomaly of spiral galaxies and the need for dark matter
3
The contribution of components like dark matter, stars and gas to the mass of a galaxy
2
In what ways does dark matter help in "binding" celestial bodies together in a Galaxy?